We hit the lake this morning.  We launched at Lofers Bend East.  The ramp is in great shape and there were no issues launching.  I think a boat of any size could be launched there.  The boat dock at the ramp is out of the water, but you can ease back on the ramp and pick up there.    There were 3 other boats that launched there this morning including the Park Ranger.  The Corps has done a great job getting this ramp back into shape.

We fished for black bass on the south point of Big Rocky Creek.  The boss picked up a one pounder, and we missed 2 or 3 others.  But, it was very slow there.  While there, we did see that 3 other boats had launched at Walling Bend’s ramp on the Big Rocky Creek.  We didn’t ride over there, but apparently it is still a good place to launch from.

We rode on down to Bee Cove and fished there.  We had a couple of bites and I picked up this 3 1/4 pound beauty. 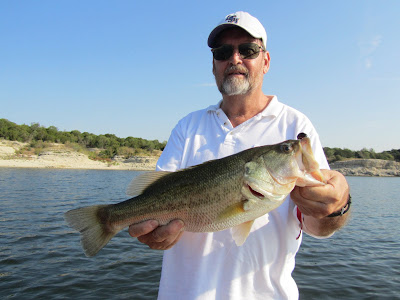 At best you would say the bite was slow.  The water in the lower part of the lake was clear and up at Bee Cove it was still stained.  The water temp was in the 80s… warm.  The lake is 14′ 4 1/2″ low.  The wind was down, less than 5 mph.  I took a look at the McCown ramp and did not see any vehicles on that ramp.

On the ride down to Bee Cove, we noted a hump that we had never seen before out in the lake, near what we know to be the river channel.  The hump had a plethora of stumps sticking up.  That will wake you up if nothing else will.  It is still un-nerving to be ridding along the middle of the lake in 60 or 70 foot of water and have it jump to 8 or 9 feet deep…. Thrilling in fact.

We also saw a  several folks fishing for stripers up around Big Rocky Creek.  Did not see them catching anything and the shad and fish breaking activity was minimal while we were there.

All in all, it was good to be back on the lake.  A great day and it felt good to have a big old bass try to jerk the rod out of my hands…. he was a fighter.