We made the trip to Whitney this morning.  The weather guy on the evening news had indicated the winds would be tolerable and that it would be sunny….   Well, the winds were about 6 to 8 mph.. not to bad.  BUT, on the way down, it became apparent that the old weather guy had missed on the “sunny” bit.  This first became apparent as we were passing through Blum and a bolt of lightening seemed to hit so close to the pickup that it looked like high noon outside…   On the radio, Hal Jay and his crew were telling about a small thunderstorm or front up north of Dallas….  didn’t say anything about South toward Hillsboro.  As we went on down, the occasional lightening strikes continued.  In my next life, I am going to come back as a TV weather guy… be handsome, be on TV, make the big bucks and get paid even when you make mistakes.  What a job!

We got to the Lofers Bend East ramp about 7, but we sat in the truck for another hour watching the occasional lightening flash up toward mid-lake.   We noted a striper guide sitting in his pickup on the bluff over at Harbor Master Marina… he was watching the same thing we were….  We also noted two guys in a bass boat that were oblivious to the weather.. they motored from across the lake, over to the area by the State Park and began cast around 6:30 or so.  Lightening? What lightening?.

At any rate, by 8 am, it seemed like the sky had settled down and the weather stuff had moved west and north, though it was still very cloudy up toward Bee Cove and McCown Valley.   We opted to just fish Rocky Creek.   The water temp was 82 to 88.  Winds light, water was clear.  We fished ledges, points and drop-offs.  No shallow flats. 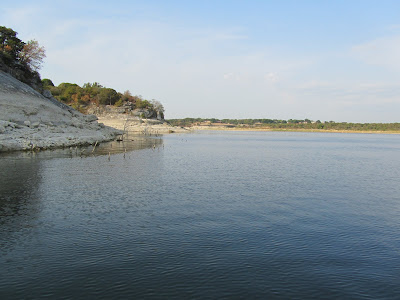 There is some great looking water here. 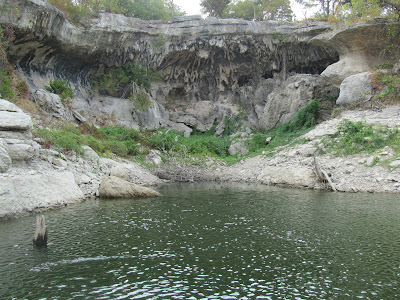 We picked up 3 fish. Two about 2 pounds and 1 short fish.  All were caught deep, in 20 foot of water on T-rigs…  blue fleck old monster Zooms.  The bite was really slow.  The fish were all caught out near the mouth of the creek.  We did fish all the way back to the end of one of the branches.  I don’t remember a bite to be had in the back of the creek.

We have fished mid-lake up around McCown most of the times we fish.  We just don’t know the water as well around the lower lake.  Had there not been that dry lightening this morning, we would have went on up the lake.  In fishing, as in real estate, its location, location, location.  A person has to know where the fish hang out.

We noted 4 boats fishing that appeared to be fishing for stripers around the mouth of the Rocky Creek.  We did not see anyone “catching”.    Lots of trolling around.

We did see 4 fox in a group…  what we assumed was a mama fox and 3 cubs… but who knows, maybe they run in packs now.  We have see fox before at Whitney, but they have been one at time along the lake shore.  Here are a few photos.  These shots were taken from a distance and then cropped and enlarged… it may still be hard to make them out.

There are 3 in this photo… see if you can find them. 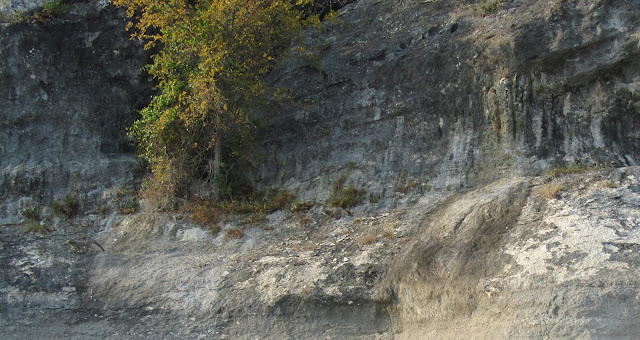 There are 2 fox in this photo… see if you can find them. 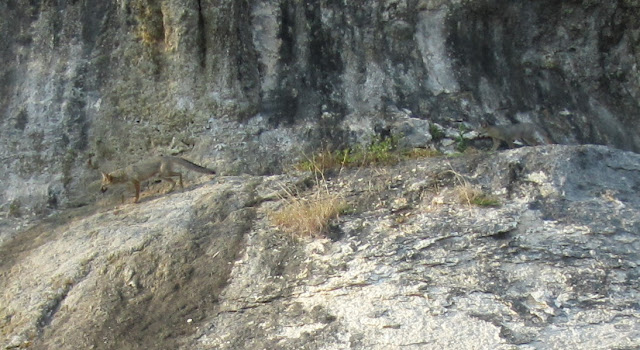 And there are two more fox in this photo… 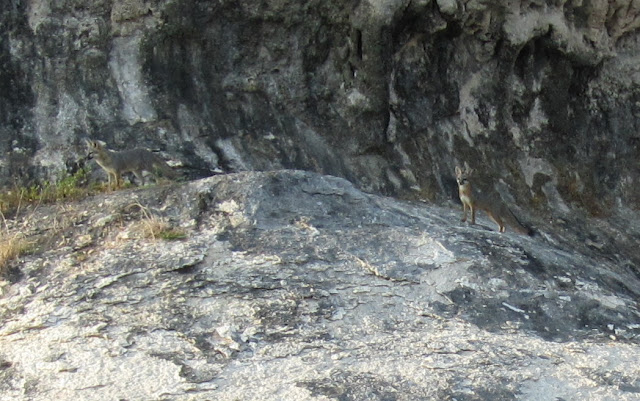 While the fishing was slow, as always, it beats the heck out of working.

Here is another shot of some of the water we fished.  This location had a number of huge rocks just beneath the surface and several large tree stumps.. all on a point.  We thought we would have picked up some good fish in this spot.. it was about 20 feet deep off the point.  But we got nadda.. as in nadda bite.  The quacker in this picture followed us around for an hour, circling the boat… no bread to feed him… he didn’t get a bite either. 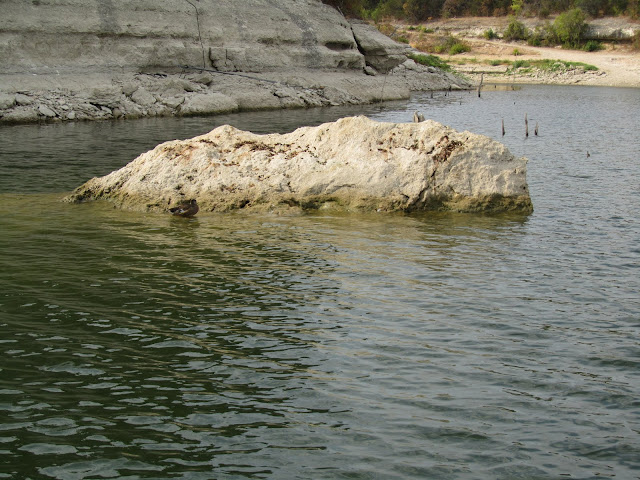 We also saw that some folks are still launching at Walling Bend Park on Rocky Creek.   We didn’t go check it out, but there was a truck and trailer there.