We drove on down to Whitney this morning.  We weren’t sure we would be able to get to the lake because they had a wildfire that apparently started near the entrance to Lofers Bend Thursday afternoon.  But, when we got there at 7:30 a.m., there was only an EMS vehicle and a trailer for a dozier parked across the road from the road side park at Lofers.  There was no smoke visible anywhere so we figured the fire crews had snuffed it out.   From Highway 22 you could see some buildings and at least one house that had burned.

At any rate, the wind was up a bit, 8 to 10 in my estimation.  The water temp was about 72 to 75 degrees and generally clear.  Air temp was about 65 or so, not too cool, just right actually.  The sky was blue bird… no clouds or smoke anywhere to be seen. We headed out to the shallow flats where we have been finding some schooling fish every once in a while the past couple of weeks.  We didn’t do to well there on Wednesday, but we are not ones to give up easily on the fish.  Our view is that if they have been there once, they will come back. 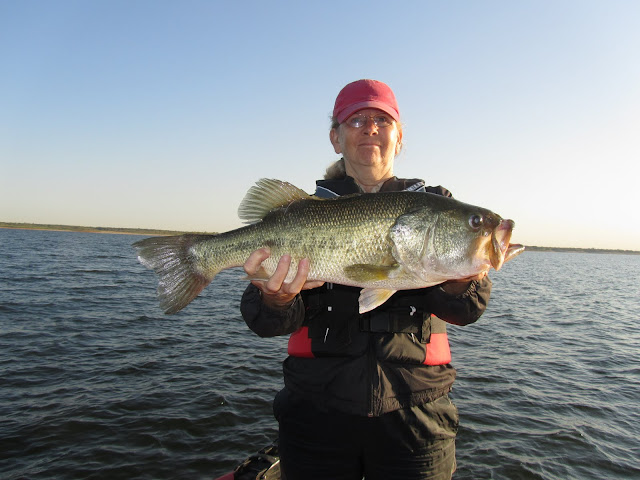 She was really happy to get it after having lost a really nice fish on Tuesday when the big ones were schooling.  I got one too, but mine was only a 3lb 8oz fish. 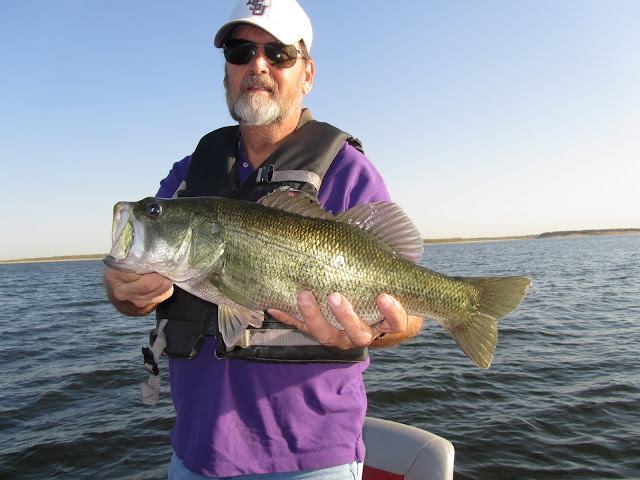 It was pretty windy, hence the life jackets, just in case we were to get tossed out of the boat.  And, the top water lures had a hard time with the waves, or the bass did. It was just too rough.  We caught a total of 5 fish, the others were keepers, but small, the Boss had 3 and I had 2.   We tried crank baits, T-rigs and C-Rigs, but didn’t get any hits on them.

About 9:30 we noticed more smoke coming from near the burned area from yesterday.  Here are a couple of photos from the lake. 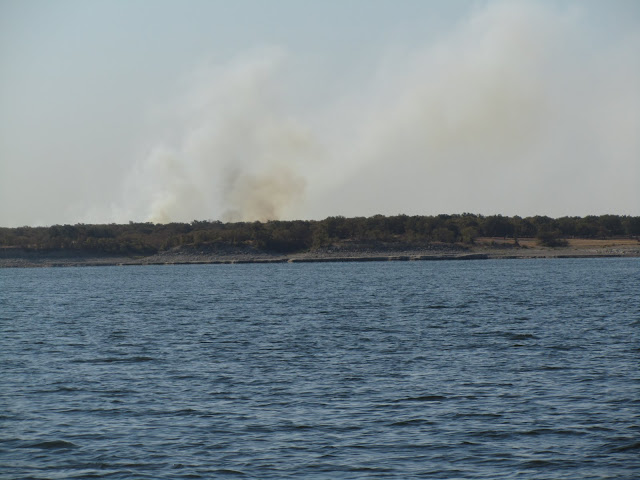 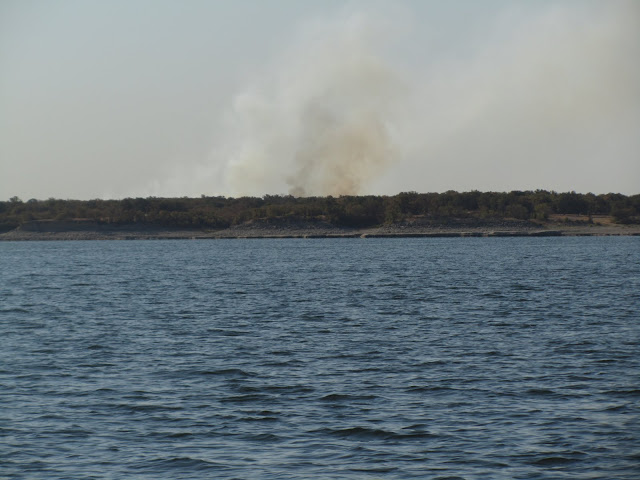 By the time we left at 11 a.m. , the fires seemed to be out.. at least there was no more smoke…  When we left, there were Sheriff’s Deputies and fire fighters out near the highway, but all seemed to be under control and Highway 22 was open.

Top water lures were the tool of the day, same as on Tuesday.  The fish were not schooling, and were just scattered around the flats on isolated structure, stumps and rocks.   I did lose one other fish that would have went 5 lbs or so..  the wind was killing us in the shallow water.

The wind actually died down somewhat around 10 or 10:30 a.m, but by then the fish had quit and we had had enough.

We headed on back to Sisters Diner for some of that good old chicken fried steak, mash potatoes, rolls and stuff.  It was good too.   When we came out after lunch, the winds had come back up and as of 3:30 this afternoon, the winds are back in the teens, not a good sign for the fire situation.