In my view, it was a less than good day on the lake… the Boss said it was pretty good (she had 4 of the 6 all in the 14 inch range…  small).  There were no schooling fish that we could find.  The wind was a hassle, it was supposed to be light winds, but my estimation put them at around 10 mph and occasional gusts above that.  Worse than that, the winds were from the East (or at least Southeast)…   When the wind is from the East, the fish bite the least.

The water temp was 78 to 84.  The air temp was about 80.   The lake is 15.72 feet low… for us regular folks that is a little more than 15 feet,  8 and 1/2 inches.  The water was clear in the lower lake.  Winds were enough to make it more like work than fishing.  The sky was supposed to be cloudy, but it turned out to be fairly clear as the morning went on.  We launched a little after 7 a.m and there were 4 rigs on the ramp at that point.  We were late.  We fished until 10 a.m. and called it a day.

The big issue was there were NO SHAD to be found, therefore no schooling fish.  We caught nothing on top water and nothing on crank baits.  Everything we caught was on T-rigs, purple worms.  We ran into Freddie on the lake, by the time he got to the ramp, he had 8 bass.  Including this 5 lber.  Freddie said his other fish were in the 14 inch class, like ours.  All of Fredddie’s fish came on T-rigs and purple worms.  Freddie was fishing rocky points on the lower end of the lake.  We mostly fished sandy bays and points looking for shad and schooling fish. 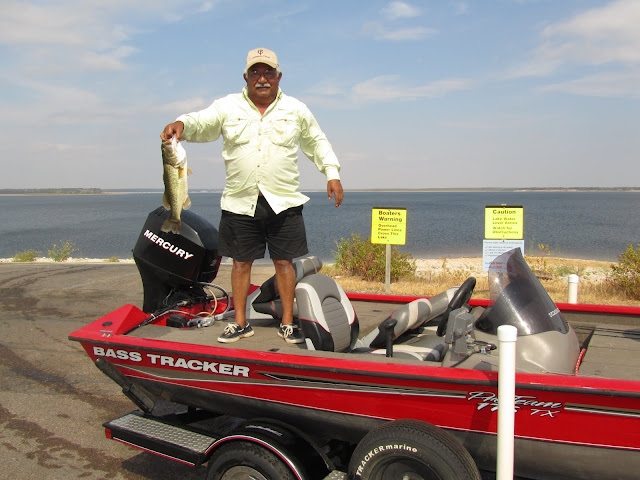 Freddie said he normally fished the Cedar Creek area and had been having good luck up there, especially around Point 8.   But, the ramps he has been using up that way were such that he could no longer get in other than at Juniper Cove which is charging $10 to launch.

We visited with the lady at the gate to Lofers East.  She advised that the Harbor Master Marina ramp was closed and that Uncle Gus’ Marina ramp was closed, as are the other ramps in Lofers Bend.  Our view is that the ramp at Lofers East was marginal and not long for being open unless something is done to fix the hole at the end of the ramp.  The Boss waded out again today and checked the ramp. 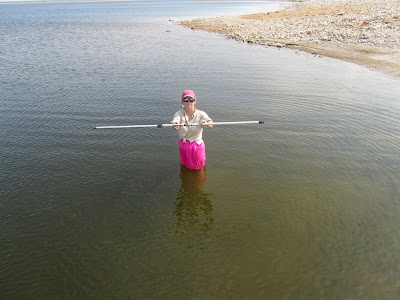 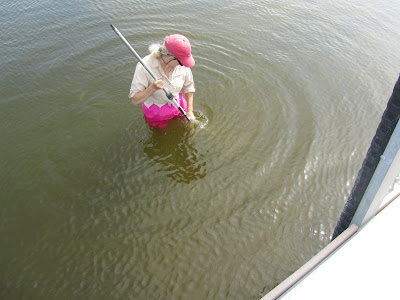 The lady at the gate advised that the Corps had been out checking the ramp last week, but she was unaware of what their plans might be or when they might be back out.  The Corps might fix it or the Corps may close it.  Who knows. Today, we launched and loaded without a problem, but we were very careful not to get the wheels down past the end of the concrete ramp.  We had to use the engine to pull the boat off the trailer and to push it up on the trailer.  That method will not work from much longer.  We have a 21 foot boat.  I think those folks with 17 or 18 footers or less and single axle trailers will be able to launch for a while longer.  Freddie said he had been using the Cedar Creek ramp but it had just got too shallow.    At this point, the only ramps I have heard were open were Juniper Cove ($10) and the Red Bluff ramp in Steele Creek which is open access (free).  The Steele Creek ramp is just the lake bed at this point.

I have heard some guys say they are launching from private or semi-private ramps up the lake, but they are using 4 wheel drives and launching using the lake bottom.