Back out on the Lake today.. first time this week.  The Boss has been under the weather.   Found a friend who wanted to do some worm fishing.  Said he didn’t know much about it and wanted to learn.

Anyway, we drove down this morning.  Very nice.  The air temp was 70 degrees, the water temp was also in the low 70s.  Water at the ramp was clear and over along the State Park it was clear.  Not much further up the lake though, the water had become stained and murky, very stained and murky.  The lake is 16 feet low and continuing to drop.  That is a 4 inch drop since we were here last week.

Even though my buddy wanted to learn worm fishing, I couldn’t pass up the first hour chunking a top water around and he did too.  He caught one sand bass.  There were no shad running anywhere that we saw and the lake was like glass so you could see anything moving on top for a long ways.    It was an hour wasted.

Next, we fished some rocky points on the west side of the lake with T-rigs and picked up two bass, both keepers, but his was a 3 lb 9 oz. fish, the largest catch of the day.  He had some real fun with it.  We tried another spot or two with no luck and then headed to the State Park bluffs. 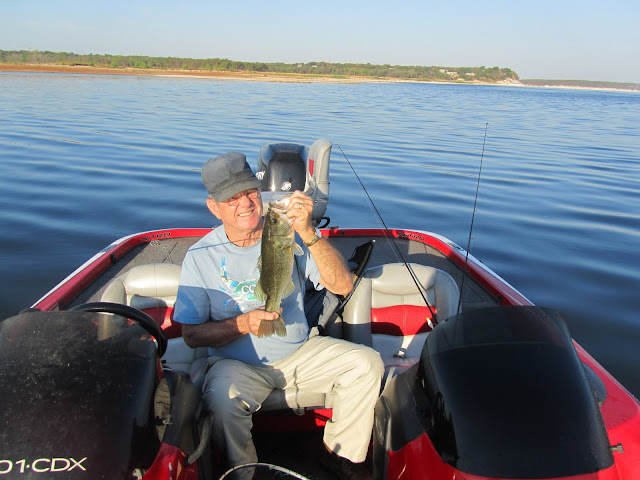 I should have taught him how to hold up his fish so that it looked really big.  It was a feisty critter, and a good first catch on a worm this morning for him.  Actually, I think he may have been putting me on.  He didn’t look like he had any problem feeling a bite and setting the hook.

Over at the State Park, the first few casts with T-rigs produced two more bass and as we proceeded along, we picked up two more.  All the fish in the State Park area were keepers but small.   But, the air temperature warmed up pretty quickly this morning and by 11 a.m it was flat out hot.  We were back at the ramp and loaded by 11:30.

All the fish were caught in less than 10 feet of water and most off of rocks under the water.

We didn’t have any trouble launching this morning at Lofers Bend East.  My Buddy said that he had been to Walling Bend ramp on Rocky creek and though the concrete ramp had ended at the water, he thought the ramp could be used to launch that the bank was solid and gradually fell away.  He didn’t launch there, but had been up there in his boat looking at it with the depth finder.  He says it wasn’t deep.   I didn’t notice the ramp at Harbor Master Marina and don’t know if it was open or closed today.  The wind was from the south, so in theory it should have been open.  I also heard that maybe the Corps had done some work in the Day Use area, but that it was still shallow.  Maybe a person could launch and use their trolling motor to get out.   My buddy said he has also been to McCown by boat and that ramp was not usable at all.

All in all, it was a good day.  Another fella at the ramp did tell me that I had a tail light out on the trailer.  More maintenance.  Supposed to be real windy tomorrow so I guess it will be another day piddling around the garage trying to get that light replaced and re-sealed.

I did check on the Lake Whitney mystery crappie holder.  It was still in place though it looked as though something may have occurred on the other side of it…. donno.  Maybe the Corps opened it, maybe they didn’t.  Didn’t get out and go check…  I have enough crappie issues of my own.  That’s one of the goals in my bucket list… learn to crappie fish.

The Boss says she doesn’t need any lessons fishing with worms.. has been at it for 40 years or more.  She just wants to be back out on the lake… maybe next week.

Ready for some rain and cooler weather.