Forrest Gump said:  “My momma always said, “Life was like a box of chocolates. You never know what you’re gonna get.”

That’s the way the schooling fish are on Whitney.

We hit the lake this morning at 7 a.m. sharp and went back to the area where we have been finding schooling fish.   The lake was calm, the air temp this morning was 68 or 70, nice.  The wind was less than 3 mph… almost calm, but not quite; just enough for a little ripple on the surface.  I didn’t check the water temp (we were fishing as soon as we got there), but I assume it was in the low 80’s somewhere.  The lake is a little over 15 1/2 feet low.  The water on the lower end of the lake is clear.

We pulled up a 100 yards out from our current “good spot” and began to get our rods out.  We immediately noticed that the fish had not waited on us… they were busy, busy, busy.  The water was just boiling.  Deep water and shallow water.  We dug our top water rigs out and got after it.

It was “a box of chocolates” all the way.  We didn’t know what we were going to catch.   The boss immediately boated a half dozen or so whites, very nice whites. They were big whites.  I immediately lost two big fish, at least they were big according to their strikes which seemed as though they were trying to kill the lure with a big old boat paddle.  My next fish was about a 4 lb striper.   I think I boated two of those in among a few whites/sandies.  But, shortly after the striper came a crushing strike and the fish took off for deep water.   This fish went every where around the boat, we had to raise the big motor and the trolling motor.  At one point, my rod was bent under one side of the boat and the fish was dancing on the water 30 feet from the other side of the boat….   It took a bit, but I boated a 7 lb 2 oz black.  Well, the Boss put it in the net anyway…..and we got it in the boat.  What a hoot! 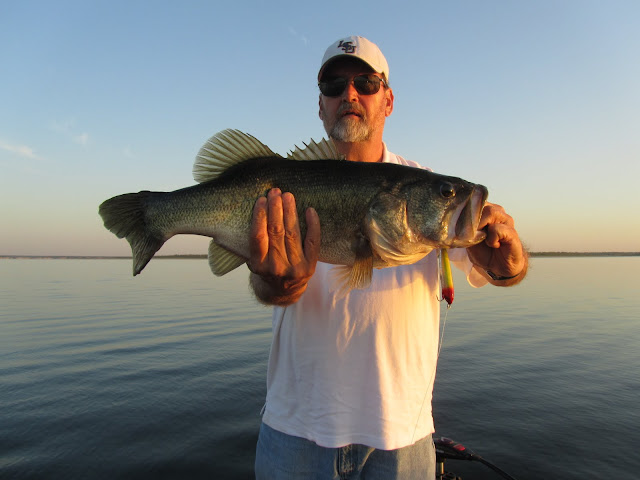 We had not taken any pictures to this point, but since we weren’t keeping today, the Boss got the camera out and snapped a few of this one.  That was a shame too because the fish just continued work and eat…. we hurried as best we could, but I am sure we missed some good opportunities.   When we got our stuff back together and got back at it, the Boss hooked up with her big one, well maybe we caught a few whites in between, its hard to remember.  But, she boated this 6 lb 6 oz Black.  You can tell by the smile that she was just having business as usual. 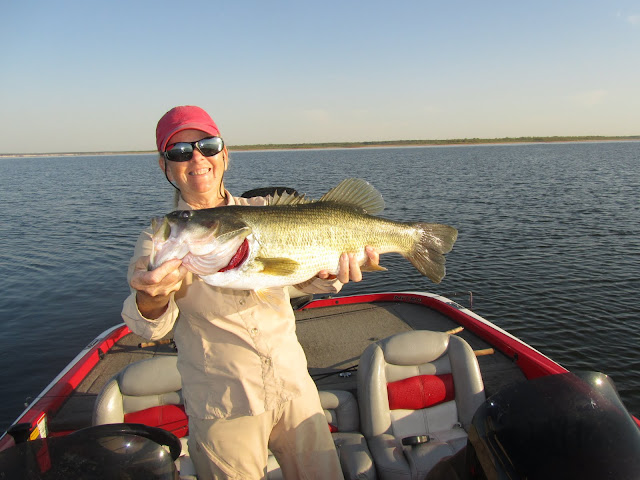 I just love it when we get to fight those good ol’ biggerns.   And, I love it when the Boss gets her share too….  All in all, I think we had about a dozen big white bass, 2 black bass, and one keeper striper.  For all those fish huggers out there, you will be happy to know that we put them all back today…. so get out there and try to catch them yourself…

I tell you life is good.  It doesn’t get much better than this.  On the water at day break.  We have the lake pretty much to ourselves and we are on top of some really, really hungry fish….

The boat dock was back in the water at the Lofers Bend East ramp today… a good thing.   Ramp is still good, though I thought I could see the end of it when standing on the end of the boat dock.  I don’t know how much longer the ramp will be useful. But folks we need to make hay while the  sun shines…. Fishing is great….  whether you like whites/sandies, stripers or blacks.  They are in school and giving lessons… and boy are they fun.

If you have an opportunity to go, hit the lake. You will not regret it.