We made it to the lake again today…  it was HOT again, but still great to be on the lake.  The lake is 15 feet down, the Lofers Bend East ramp still in great shape.  Water temperature was 88 this morning.  Winds were light and there were no clouds.  Air temp at 7 a.m.  was about 83.   The water in the lower lake where we fished looked stained this morning.  We saw no one on the lake when we launched, however, there were two empty trailers already at the boat ramp.

Yesterday, we talked to a guy on the ramp who said he had caught some sandies and 3 LMBs.   We had seen him fishing up the lake in a shallow area.  This morning, not seeing any other boats on the lake and having caught, zero, nadda, nuttin yesterday, we decided to give his last known location a shot.

We pulled up on the long sandy point and began unpacking our rods and such…. almost immediately, the water began to boil.  The Boss picked up a Rattle Trap and started boating fish.  She caught a ton of sandies, two blacks and several stripers. 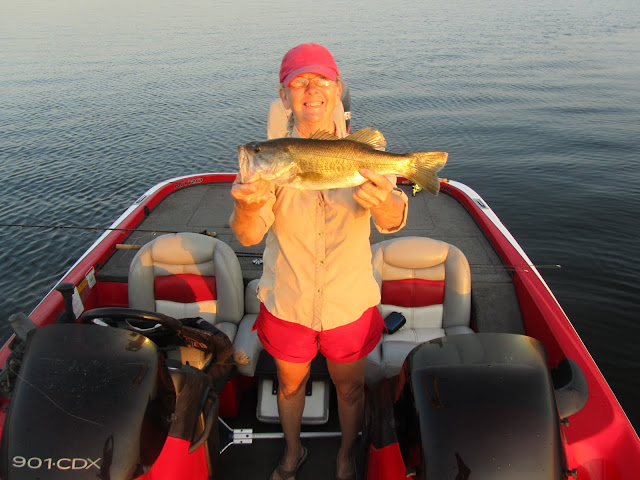 I  didn’t even get a chance to pull my life jacket off.  I just picked up a rod with a Pop-R already tied on… Like with her Rattle Trap it was a strike on nearly every throw.   At first we were going to take some pictures, but the action was just too hot.  We threw the camera down and just cast and tried to crank them in.  There were some nice size stripers in the bunch….  It was sandies, black bass and stripers….  we didn’t know what we would pull in next.  For 45 minutes, those fish wore us out.  Some of the surface strikes sounded like someone throwing an anvil in the water… just huge.

This was the first striper I boated…. 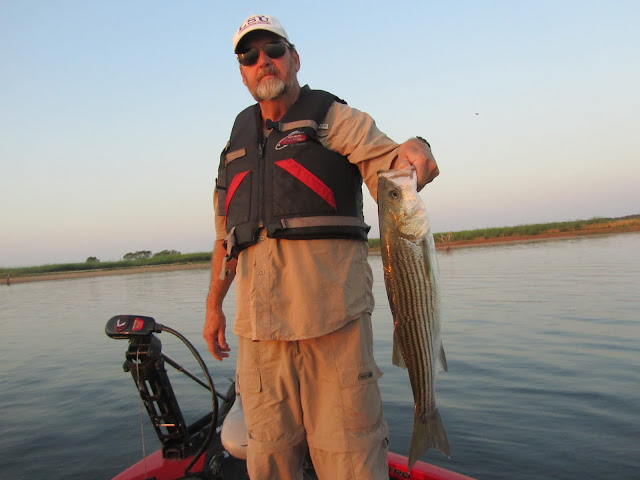 I let him wrap the line around the trolling motor, but the Boss saved the day and netted him before he could break the line.  He did a great job of fraying it.  I caught one black, a half dozen or so whites/sandies and 3 or 4 stripers.  The Boss also had some nice stripers.  Truthfully, she kicked butt this morning….  she was putting two into the boat for each one I got in the boat.

After the daybreak action quit… and it turned off like someone flipped a switch, we didn’t get another bite.  The fish were like gov’ment workers… when that 8 a.m came… they shut down and went to the house.

My advice for the Labor Day weekend… get on the lake early, find some shallow water where the fish are breaking… and have a good time for as long as it lasts….  after that, try to find some shade or A/C and stay out of the sun… its HOT by 9 am.