Well, the fish were there today… all three varieties… bass, striper and whites… but, the whites were lit up.  We couldn’t get a lure in the water without a white jumping on it.   We could see the big blacks with their big wakes and strikes, but we were not lucky enough to pick one up.  We did get two small ones, a pound and a two pounder, but no big ones today.   I did boat a small striper, but didn’t even get a big striper on.  The water was alive with fish chasing shad, we just didn’t get the hits today. 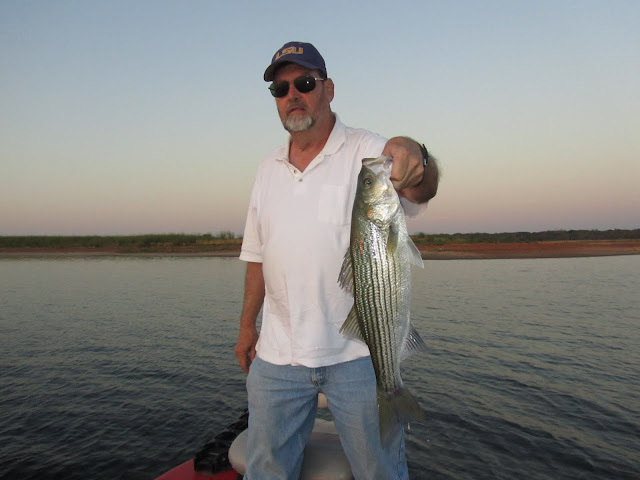 I guess that is why they call it fishing, because some days it is just not catching.  We did boat 25 or 30 big whites.  Strange since there are a lot of days we would have loved to do that.  We just got spoiled.  The fish schooled for about the same amount of time, 45 minutes to an hour.  Actually, the schooling activity may have been much better today than it was in the past, but again, maybe that was just all the whites that were there.

We launched at 7 a.m. and headed to our normal sandy, shallow point.  Water temps were about 80.   Air temp was much warmer than it has been the last week or so.  Winds were light, not quite calm, but close.  Water was clear.

We launched at Lofers Bend East again.  We noted that the end of the ramp is now clearly visible. 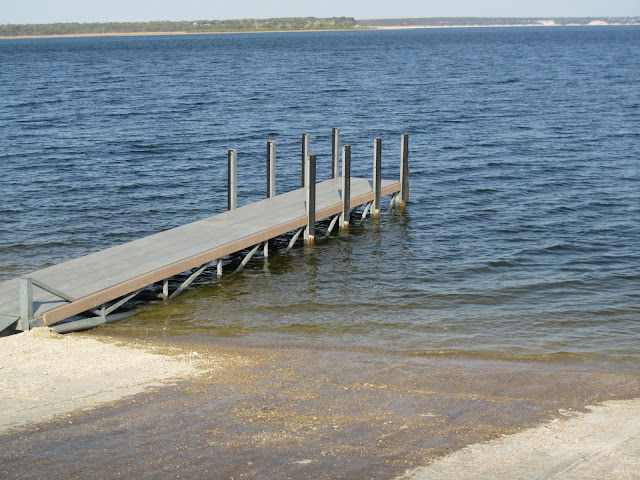 If you look at this photo, the concrete portion of the ramp ends at the first post on the boat dock.  Standing in the water you would be about waist deep there, so it is plenty deep enough.  However, there is a pretty good drop off at the end of the concrete.   It is about a 6 inch drop.  The first question is whether that is enough to hang your trailer on if you back down below the drop off.

The second big question is whether the Corps is going to do any work to fill in those holes at the end of the ramp.  The lake bottom beyond the ramp is rock and is solid enough to continue launching boats from.  Its just a question of whether or not your trailer can be extracted from the holes beyond the ramps end.

On my double axle trailer, the rear wheels are sitting right on the edge when I load and unload.   I am not sure how much lower the lake can go and allow me to launch without issue.  The current level is now 15 feet 7 1/2 inches low.  We are taking it day by day now.

And there you have it… some days are diamonds, some days are stone.  I wouldn’t say this one was a total stone… just a big disappointment that it wasn’t a diamond.  The opportunity was there, we just couldn’t connect with the fish.