Ok, you need that Whitney fishing report before this weekend?  Well here it is…

Got to the lake about 7 a.m. this morning.  It was before day break which is about 7:30 now, but it was plenty light.  Did not need the boat lights by the time we got into the water.   There were 5 or 6 rigs that put in at Lofers Bend East today, at least 4 of them beat us there.      Surprisingly, the water is relatively clear, but on the lower lake and the mid-lake areas.   The water temperature this morning was about 70 degrees when we launched and about 75 degrees when we came off the water at noon.   Winds were light, skies were completely clear and it was sunny.  Last Tuesday when we fished it had been cloudy to partly cloudy and the fishing seemed to be better then.

The lake is continuing to rise, or so it appears. Water has covered some of the structure we were fishing. I would estimate that the water is up over 6 inches since last Tuesday.  This is not what the Texas Water Development Board’s Texas Real Time Reservoir Levels web site says.  Its data says that the lake is down one tenth of an inch since Tuesday…. but, I can tell you I am looking at some structure that is not moving and is not going to be moving unless there is a major earthquake and for sure the water level is up about 4 to 6 inches.    The lake according to the Real Time Reservoir Levels for Whitney, is 15 feet 3 inches low.  The Corps of Engineers web site puts the lake level .03 of a foot higher than the TWDB’s web site.  I donno, maybe it has tilted sideways because all the fish have moved to one side….  hard to tell.  All I know, is stuff that was out of the water is now covered up.

We did not find any schooling fish today, Zero, Zip, Nada, Nothing.  There were some buffalo, carp and gar rolling on top of the water, but few to no LM bass, whites or stripers.  We caught nothing on top water where last Tuesday, half the fish seemed to come on top water and half on T-rigs.  Today, everything was on T-rigs and the ones we got in the boat were smaller fish.  They were keepers, but small. 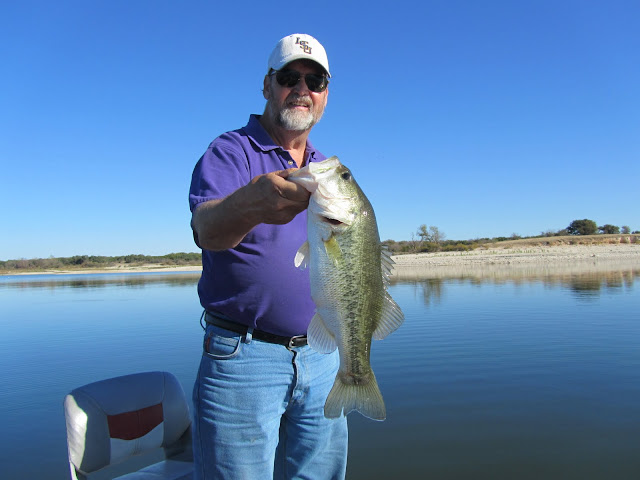 We didn’t weigh any, but I would guess they were in the 2 to 3 pound range. 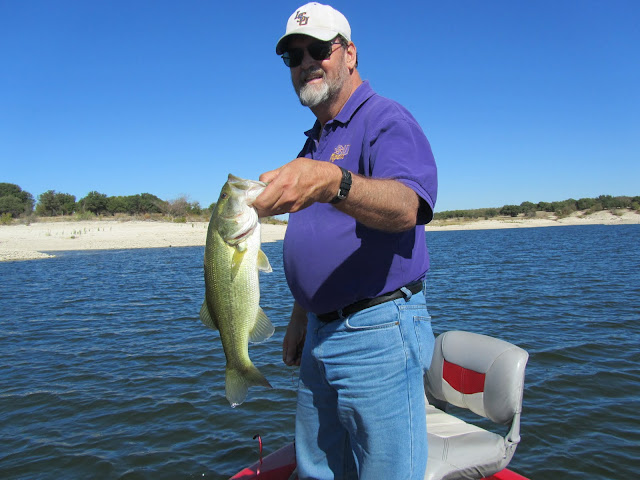 We had a total of 9 black bass or LMs (large mouth) as some folks call them. 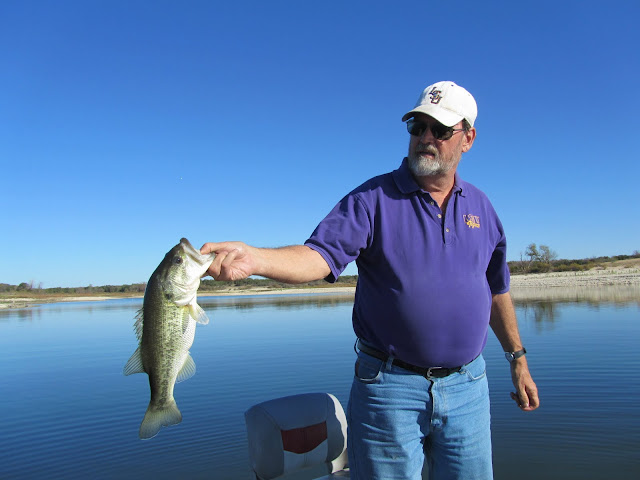 We had to hunt for fish again today.  But where we found them was deeper.  We found fish in shallow water on Tuesday.  Today these were in 10 to 20 feet of water off the ends of points.  All were caught on T-rigs.  The bite today was very soft and hard to feel.  Several times, all you got was the fish swimming off with the worm.  Tuesday, I used a two worm rig and it worked well. Today, I didn’t get a hit on that, but changed back to the single worm and started catching fish.   All the fish we caught were in only two locations, but the structure was similar in both.  We lost two fish that were in the 4 to 5 lb range.  I think this was due to two issues.  First the bite was light and they were both swimming off with the lures.  Second the wind came up some around 11 a.m. and it was even harder to feel the bite.  The bottom line was that we didn’t get good hook sets on either fish.

That’s another thing.  Tuesday, we caught a fish in the first or second cast and then off an on all morning, but they were scattered.  Today, we didn’t catch a fish until after 10 a.m.  So today, our fish came in the last two hours we fished.  If the wind hadn’t come up and made it tough on the points we were fishing, we would have stayed longer.  Our fish today came from the mid-lake area.  We didn’t get a bite in the area we had been fishing on the lower end of the lake, so we moved up to mid-lake.  We wanted to check out the structure in some of the places we had been fishing in the spring, but hadn’t been back to since the lake has dropped so much.  We were able to identify some new potential places and to get a better understanding of some of the places we have been fishing when the water is up.

The ramp at Lofers Bend East is still good.  The dock is still in the water and that’s a good thing.  But, when the wind is from the North like it was yesterday, it is a really tough ramp to load and unload at because of the waves.   I still recommend sticking to the dock side (west side) of the ramp.    Hope you get to go this weekend, and those of you who are real fishermen, I hope you load the boat with good old biggerns.