We haven’t been to the lake since Monday… been too WINDY most days and it looks like we will be baby sitting the grandson tomorrow and Saturday…. I donno, maybe we will be able to get back out this coming Sunday or Monday…. I am hoping anyway.  In the mean time we will be watching the Ranger tonight and playing with the grandson for the next couple of days.

This is the TP&W fishing report for Whitney that I received in email today:

The interesting thing to me is that it focuses on some stuff that we do… “main lake points,” “Rat-L-Traps” and crankbaits.   We did fish main lake points last Monday with fairly good luck with crank baits… we boated 6 keepers with two 4 pounds and over.  It is very unusual for the TP&W report to match what we are doing.

Monday we caught fish on these lures: 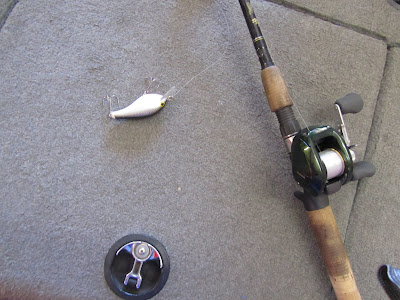 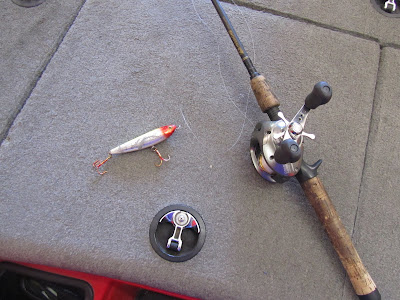 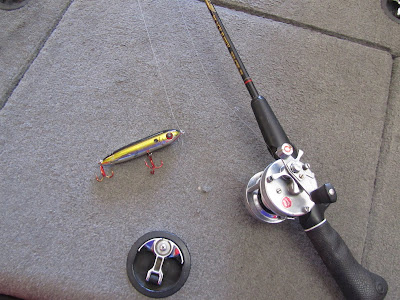 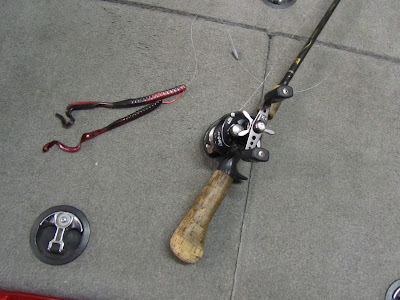 The last one, the T-Rig is a new configuration I have been testing the last couple of weeks.   I have caught fish on it when I wasn’t catching them on our standard rigs.  The interesting thing is that I thought the fish would likely be bigger, but I caught both small and large fish on it… when I say small, one or two were in the 14 and 15 inch range…  those two worms had to be a mouth full for them.  In most of these cases I lose the second worm that is just hooked through the head.  If they come out of the water and dance at all, that worm is going to go.

I caught a few fish on the double worm rig before the Boss noticed what I was doing….  she got me straight on that issue again…  always keep her up to date on the lures I am using….  I think in another few years, she will have me completely trained as a fishing partner.

I like experimenting with the lures… this is the homemade one I completed a couple of weeks ago: 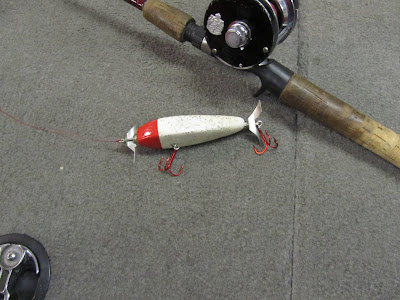 If you look at it closely, you will note that it has some interesting propellers on it.   I ordered a bunch of those back in the 80’s from Uncle Josh’s Bait Company.  They were called, big spinners and little spinners.  The sad part is I only got a couple of dozen; Uncle Josh’s doesn’t carry them any more and I haven’t found them on the Internet.  At any rate, a fishing buddy in Austin (I think he lives near Waco now) showed me how to modify Injured Minnow lures.  These spinners make huge wakes and lots of noise.  I think the deal is “being different”… something that fish don’t see all the time.  Anyway, all my old Injured Minnows are beat up now and most don’t float high enough in the water.  This one, I carved out of cedar by hand, and it works pretty well.

I have another old lure I like to fish with that another long time buddy put me on to.. Its a Rex Spoon.  These spoons were originally patented in 1947 or so… its stamped on the back of the spoon.  At one time, Timber King had a similar spoon, but it did not work exactly the same.  The neat thing about the Rex Spoon was when it was fished on top of the water, it would get up there more easily than any other spoon.  The Rex Spoons come dressed with a skirt, but the real trick to making them produce was to add an Uncle Josh pork rind trailer on it….  Unfortunately, I haven’t seen that 4 inch, thin trailer around in a number of years….  stuff comes and goes.  But again, the point was to make the lure a little different, giving bass something they haven’t seen before.

I remember fishing with my Dad in a place called Horseshoe Lake on the Ouachita River in Louisiana.  The lake was configured just like its name, a horseshoe.  The center of the lake had nothing in it, but the sides and ends were just a row of old cypress trees and some small bushes along the shore.  For a period of time, we would often see another guy fishing out there, sometimes ahead of us, sometimes behind us.  It didn’t matter because he always seemed to catch more than us no matter whether he was ahead or behind as we paddled around the lake.  We could tell that he was fishing with a black and white Heddon Chugger.  We went down to Gibbson’s and bought a few, but we couldn’t catch fish like Old Frenchy.  Frenchy never said anything, maybe he would wave once in a while, but mostly he just paddled along next the the shore line casting that Chugger.  Finally, one day, Dad asked him how he caught so many fish, that we had tried the Chugger and weren’t doing as well.  Old Frenchy showed us his hook up… he had added a larger back hook to make the lure sit up more in the water, and he had added a split ring to the nose.   Then he said, “you have to work it just right, don’t pop it big along, just work it gentle.  You will know when you are doing it right when you see two drops of water pop back over its head.”   Sure enough, we started catching some big bass with the Black Chugger, but never as many as old Frenchy.  Sometimes it just takes experience.   Also, you have to keep these tricks in the back of your mind.  If you closely examine the red and white top-water above, you might notice that I have added larger hooks and a split ring to the out of the box lure.  And, by the way, I always make sure to update the Boss’s lures before she uses them.

So, maybe we will get a little rain and keep the lake at least where it is for another week, and maybe the cool weather will stabilize.  THEN, those good ol’ biggern’s will start to feed.