Well, we made the trip to Whitney this morning… but it was literally a “dry run,” the boat never went into the water….

We got there a little after 7 a.m., but the wind was a bit too much for us at the Lofers Bend East Ramp which is vulnerable to north winds.   According to the Internet weather, the winds were supposed to be around 7 mph and increasing to 11 or 12 mph later this morning.  But when we got there the lake was already white capping there at the ramp.  We waited a bit, but finally decided that it was too rough to fish anyway; just not worth the effort and risk.

The lake seems to be up another inch or so higher than it was Tuesday.  Officially it is down 15 feet, 3 inches today according to the Corps data and that is a few inches better than it was the other day.  The Lofers Bend East ramp still looks good, though no one had launched from there this morning.    Just for grins, we went on over to the day use area and checked it out.  There was one pickup and trailer on the ramp and there was a striper boat just outside the entrance of the cove the ramp is in.  Here is what it looked like: 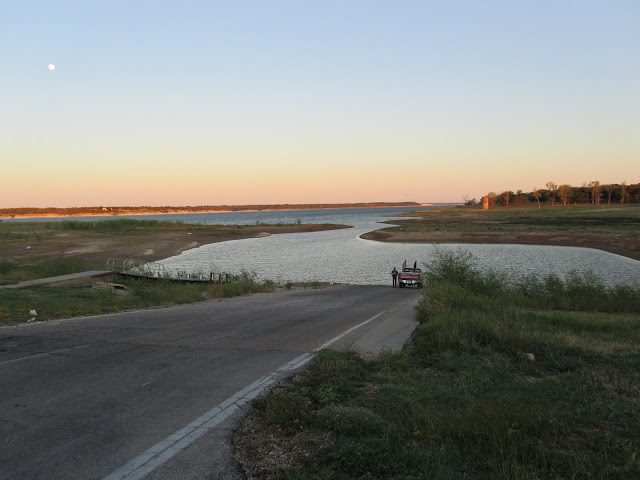 I am not sure what the fellow in the pickup in the picture was doing.  He zoomed past us and right down to the end of the ramp.   Anyway, it looked like folks are using the ramp.   I believe we could have launched there this morning, but it was still rough out in the lake so we passed it up.

Since we weren’t going to fish, we decided to go back by McCown and check it out.  The water is right at the end of the concrete ramp there.  It is shallow and muddy for a good 50 feet out into the lake.  My feeling is that ramp will not be usable until another 4 or 5 feet of water returns to the lake.  You might want to note, that the ramp ends when the lake is 15 feet low, so guage your water needs for launching based upon that mark at McCown. 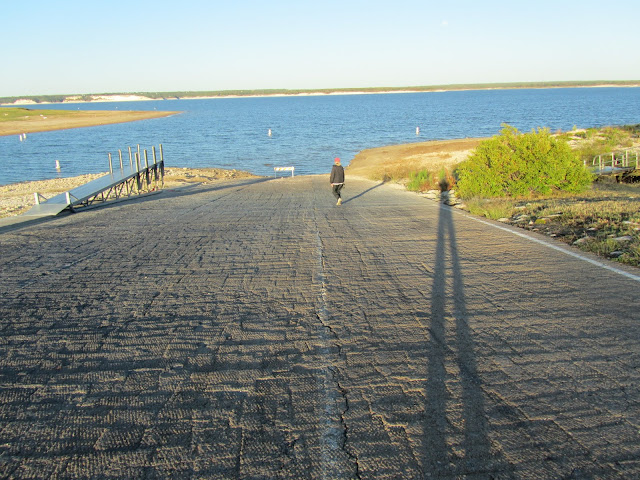 We also noted an old single lane ramp to the left of the primary ramp.  This is the photo of it.  This concrete ramp extends out into the water beyond where it is visible.  I would say if it were possible to get to it, which it is not possible, a person could launch from it. 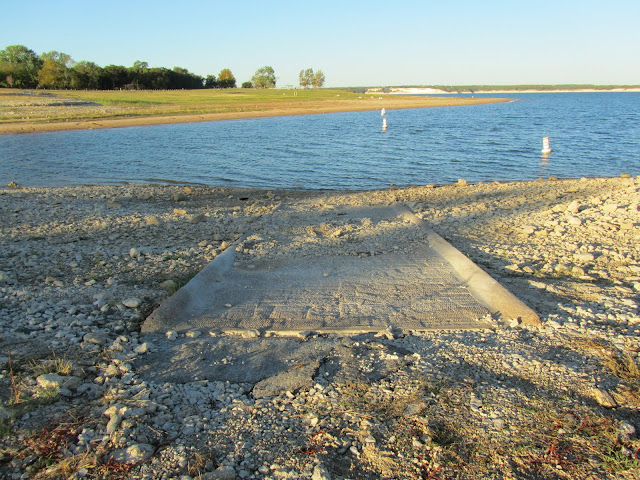 There are probably some more of these old ramps around the lake.  The question is whether a person could get to them now or not and if they are cleared enough to use.  As you can see from this, it is covered with rock, but the concrete ramp is there and it clearly goes on out into the lake.

The gatekeeper at McCown advised us not to launch our boat from McCown, but recommended Lofers Bend East… and rightly so.  But he did say that folks with small boats had been putting in there.

Following the visit to McCown Park, we decided to go by Cedar Creek Park as well.   That ramp is closed and the end of it is just out of the water just like the main ramp at McCown.  This is the ramp at Cedar Creek. 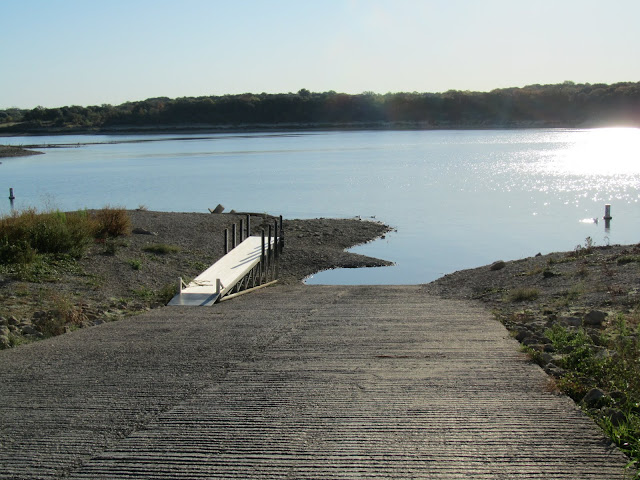 Here is another photo taken from the area to the left of the ramp. 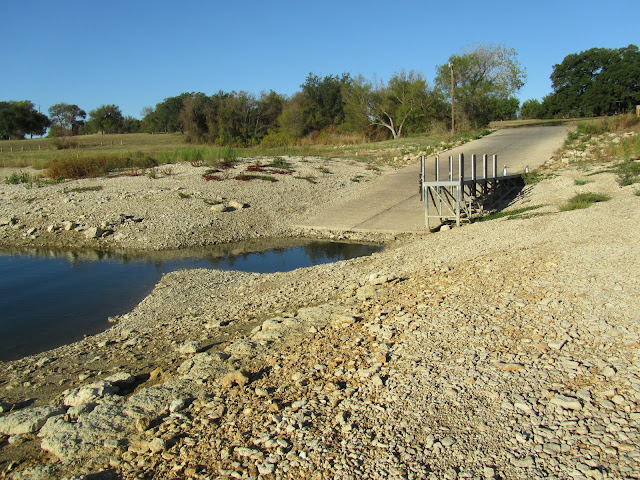 You can clearly see the end of the ramp in this photo.

We like to fish the creek just to east of the ramp, the left side if you are standing looking down the ramp.  The next photo show some structure on the point on the other side of that creek.  I have fished that point many times and caught some good fish there.  Note the concrete slab on the end of it… so now you know. 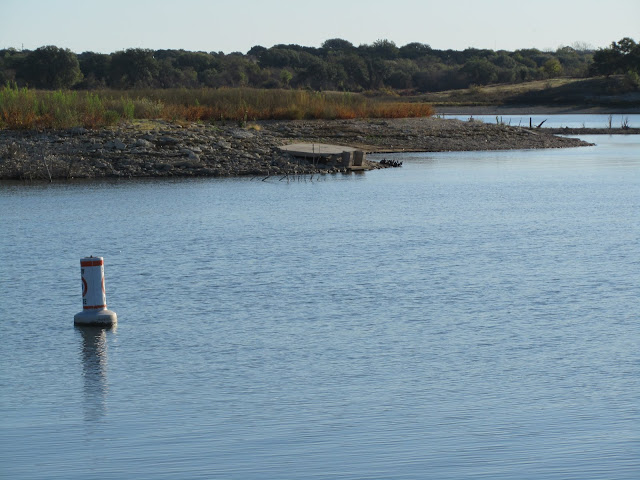 Also, if you go back to the first picture of the Cedar Creek ramp, you will see some similar concrete structure on the end of point on the left side of the ramp.  In the picture, the concrete is sticking up just to the right of the boat dock, out on the end of that point…. so now you know.  These are just two examples of structure that hold fish on flat points next to deep water.   If you make a trip down there, you should be taking photos and cataloging them.  When the water comes back, so will the fish.

By the way, we are not the only ones missing the normal water levels… this bunch seemed like they were lost. 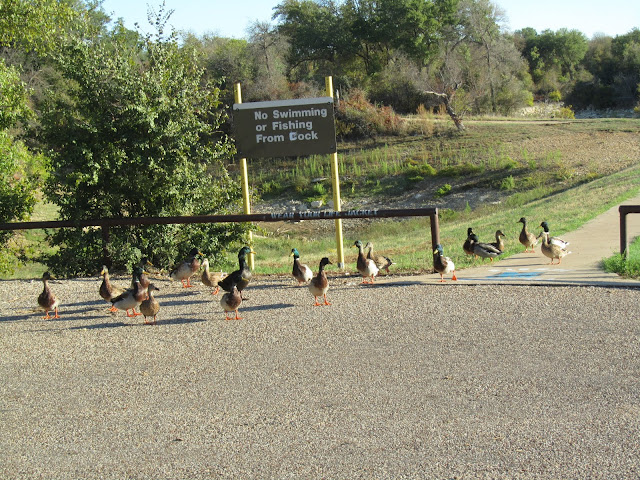 They were 50 to 75 yards from the water….  maybe they were panhandling and were protesting, doing the “Occupy Cedar Creek Park” stuff.. anyway, they followed us around the parking lot… kinda funny.

So, here is the summary of what we know about ramps today:

Lofers Bend Harbor Master:  Open except when the wind is strong out of the north.

Juniper Cove:  Open, if you have $10 bucks or can negotiate something better.

We are going to wait for the wind to die down and try Lofers Bend East again in a day or two.