What a beautiful day it was today!

I love those blue bird sky days….  cloudless.   It was about 40 or 42 degrees this morning when we left the house about 7:30 a.m.  Come 8:30 we were on the lake.  Surprisingly, the water temp was about 60 degrees, give or take a degree or two.   The lake is holding fairly steady, dropping less than one inch since we were out there last Friday.   The lake is now 16 feet and 7/8ths of an inch low.  The ramp at Lofers Bend East is still good.  We had no problem with the launch or loading.  The lake is still murky and has a lot of particles in the  water.  Winds today were very light, 5 mph at the most, but never quite calm.   We fished from 9:30 a.m. until 4:30 p.m.   It was a lot of “chunking.”

We fished all of our lower lake favorite spots and some new ones in Rocky Creek.   It was a really tough day.  I had ONE bite and no fish in the boat.  The Boss boated one keeper. 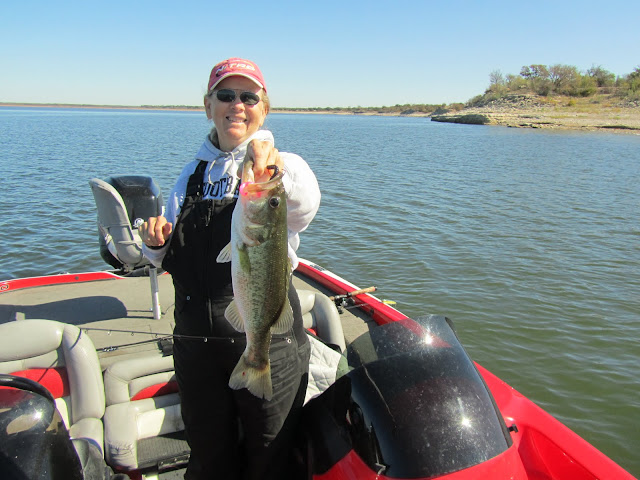 All I heard all the way home was…. “SKUNKED, YOU WERE SKUNKED.”   She caught hers on a T-Rig with a little red tail worm… some she had stashed, they are at least 10 years old, maybe more.

We were really impressed with what fell out of the fish’s mouth….   I don’t know, but it looked like a tiny crab… 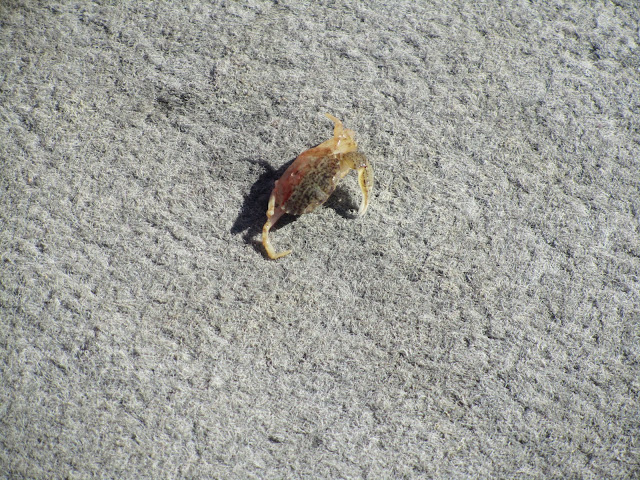 We will have to have some kind of water creature expert email us and advise us as to what it is.  As for “matching the hatch,” I don’t know… I don’t have any lures that look like this thing.

We did visit with one fella who launched about noon and then went on down the area near the dam.  We ran into him fishing down the bank as he came back up.  We watched him boat a nice keeper.  He said he had caught two.  By my estimate he had been on the water less than 30 minutes.  He was crank-baiting a square bill.   He said he had been catching fish between 1 p.m. and 3 p.m.  He said he was looking for a “buddy’s honey-hole.”   He said his friend had told him that he had been doing really well on a Pop-R and on Sinko’s.    Based upon our results today, we would have been much better off if we had switched to a crank-bait.

Actually, we did try crank-baits, and T-Rigs, and C-Rigs, and top water lures including Pop-Rs.  We also threw spinner baits and I considered throwing the anchor at them every once in a while.

While we were in Rocky Creek, the Boss got a picture of the Walling Bend ramp on Rocky Creek. 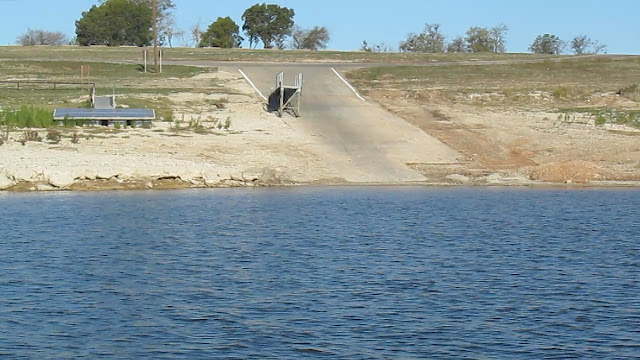 I don’t know if folks are launching there or not.  Looks more like an obstacle course than a boat ramp.   But, looking at the traffic pattern on the ramp, some folks could be using it.  None were this morning when we were over there.

We also got a look at the entrance from the lake to the Lofer’s Bend Day Use ramp…  another obstacle course.  I don’t know if anyone is using that ramp or not.  Certainly would have to know the lake and ramp pretty well to get in and out of there.  The Lofers Bend East is a snap.. no hazards that I saw today so no point in chancing the Day Use Ramp.

There was no one in the Lofers Bend East parking lot or on the lake when we launched at 8:30  The dock is still out of the water as the Corps is working on the west side of the ramp, looks like they are extending the boat ramp guide further down.  When we returned at 4:30 there was one person trying to launch and 5 other rigs on the ramp, so it got busy this afternoon…

If you can manage the winds, maybe this warm weather might bring you a good weekend…. if you are out on Whitney, good luck