We got to the lake around 10:30 a.m. this morning.  It had been foggy and cold so we were not in a big hurry to get out on the water… no point in being COLD and miserable on the lake.  It was about 45° when we got there, but there was only a slight breeze, 2 mph or less.   The fog had cleared, but it was cloudy… no blue sky in sight.    There were 4 or 5 rigs there when we got there and one striper rig had just launched.  We could see one striper boat about half way between Walling Bend Island and the State Park.  The water temperature was 50°, just like yesterday.    It wasn’t as cold as yesterday because the wind was down, but we were still glad we wore our winter gear.  The ramp is still good. Just stick to the center lane.

With the wind down, we elected to fish up lake today.   As we headed up lake, we stopped to fish one of our favorite points.   It just so happened the birds were working it over in the shallow water.   In the past we have found whites, stripers and black bass when the big boys have the shad pushed up in the shallow water… and shallow is no more than 5 to 10 feet deep.   We didn’t bother to take off our coats and life jackets, just grabbed some rods with crank baits.  I started with a white square bill and the Boss was running a shad colored Rattle-Trap.  She hooked up right off with a big fish… just ripping line from her reel.  While she had her fish on, I hooked one…  both were nice fish and running amok around the boat.   They were both stripers.  Hers got off, but I was able to get a net under mine and get it in the boat.  We stopped for a quick picture and then were back at it.  Again we doubled up.   This happened 3 times, all nice fish over 4 lbs.  We boated 5 fish.  The Boss had the big one, which went 7 pounds. 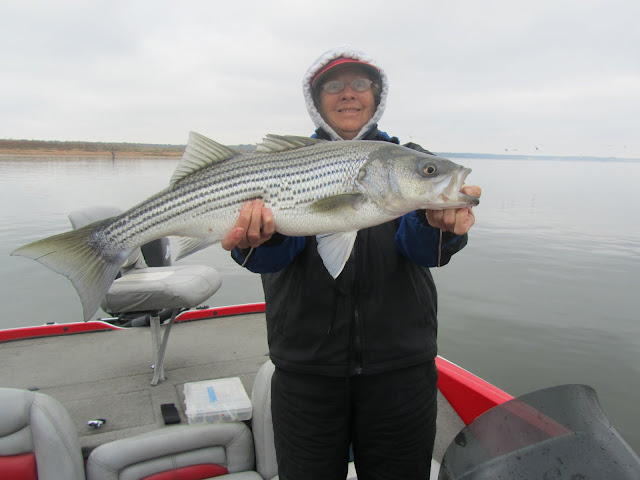 We did not hook any white bass or any black bass.  We probably could have boated 20 stripers if our tackle had not been too light, but you have to wear the stipers down when you are fishing with black bass tackle… which we were.  The birds stayed active around us for a good hour.  It was fun.

When the birds shut down, we went on up the lake looking for black bass.  The wind wasn’t up but we knew it was supposed to come up a little and be from the Northwest and we wanted to be out of that and to fish some of our old mid lake honey holes that we haven’t visited in some time.  We worked them over with crank baits, C-rigs and T-rigs, but it was like those old western movies starring Slim Pickens.    We fished from noon til 3 p.m up lake.  I got one bite and boated it. 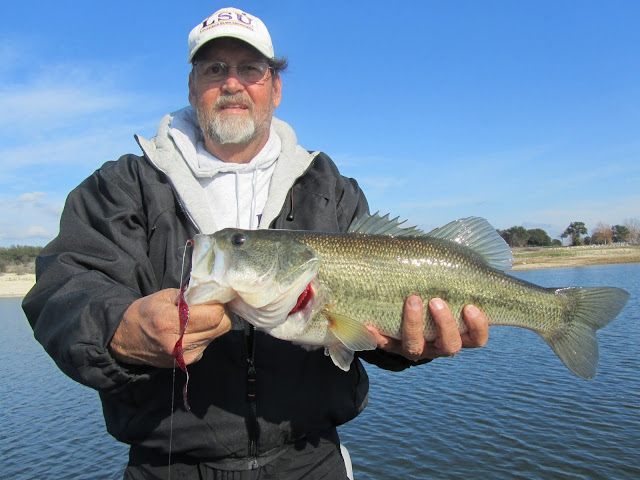 This fish weighed 4 pounds even.  It came off a deep point.  Just like the one I caught yesterday, it was a hard thump and all I had to do was set the hook and get’er in.  It felt good to boat a good bass, even if it did take all day.  I didn’t get this fish until 2:45 p.m.

It was good to see the birds working on Whitney again.  They were not really birds gone wild, but there were enough to get excited about.  We really love to bass fish and we really wait on the winter fishing in anticipation of getting a really big black bass from Whitney.  BUT, when the birds are working and the stripers are working… hey, who wants to turn down a good fight. 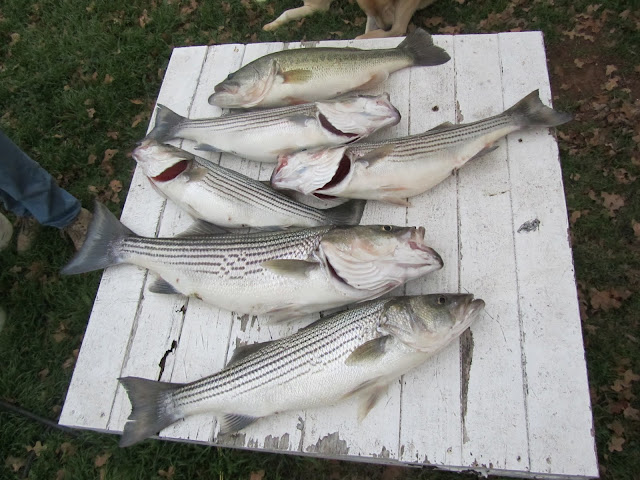 We are ready for our Christmas Day fish fry….