We got to the ramp about 1:30 p.m today.  There were already 4 rigs on the ramp when we arrived and one guy was just launching.  Some of those guys came back around 2 p.m. or so and a couple of others went out.  Most were fishing else where on the lake as not in the same area we were.  We did see one guy coming out of Little Rocky Creek.  Most of the others went to the Towash Creek area, in search of whites and stripers I presume.

The Lofers Bend ramp remains in pretty good shape, though only the center lane is really usable for bigger boats.

The air temperature was about 50° or so.  The lake is about 15 feet 11 inches low.  Its up about 4 inches from what it was before last weekend’s rain.  Good news.  Now we only need 48 more rains like the ones we had this past weekend to catch us back up to normal.  The lake was not as stained as it was, but the lower lake is still not as clear as it was back in October and November.  The water temperature today was 50° to 52°.   The skys were clear… (see the clouds in my picture.. NOT).   With the winds at 8 to 10, it was a bit hard to hold the boat on open points, but we did fish some, but spent most of our time in the lee of the cliffs along Lofer’s Bend East and West Parks. 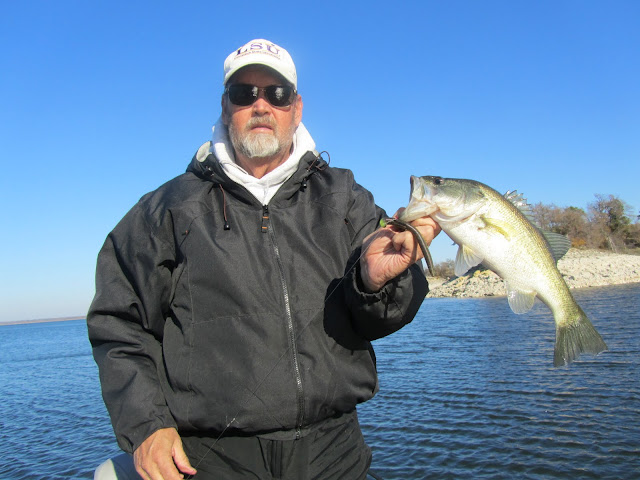 We were pretty focused today.  I tried a shaky head worm, and a C-Rig.  The boss fished a T-Rig, C-Rig and a crank bait.  We were into our “really slow” techniques we use for winter.  We had a few very light bites; actually, the Boss said she had only one bite for sure.    I boated this fish on a deep point.  It was the only one we put in the boat.  The Boss said I got lucky and found the only hungry bass in the lake.

Well, that is not exactly true, the guy that launched when we did came in when we did and he said he caught an 11 incher in the Harbor Master Marina, but that was his only fish.

But, its winter time and its always cold in the winter.  The thing we know is that when we find them, we will find them in bunches and there will be some big ones among them.    Fishing days in the winter can be few and far between, you had better get out there and get with it while you can!