It was a great Saturday on the lake.  A little cool this morning so we didn’t rush down.  Got on the water about 9:30 a.m.   The air temperature was around 50°.  The water temperature didn’t change much all day… around 54 to 55 degrees.   The lake is still mostly muddy and trashy though there were a couple of spots where the water was a bit clearer… visibility maybe a foot or so.   The lake continues to rise… How high is the water mama???….  well its actually 2 feet and 3 inches or so low…  The floating dock at McCown is now functional in addition to the sliding dock on the ramp.

It was another day of non-catching for us.  Don’t know.  My Dad would say we aren’t holding our mouth right…   I would say we just don’t know where the fish are.  We haven’t located any.  It is my belief that the first order of the day any time you are fishing is to know where the fish are going to be.  If you can find them, you can get one or two to bite.  We just haven’t found any concentration of fish.

There are a lot of birds on the lake.  Most notable about the birds though is that they are not feeding.  At least that has been the case when we see them.  A lot of roosting on the water and the edge of the water and a lot of sailing around, but little diving and feeding. 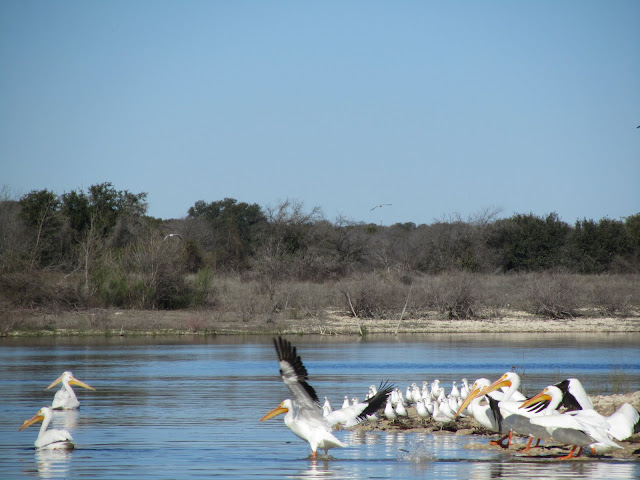 This was a bunch of pelicans and gulls along the shore… looked like fans lining up at the Bass Mater Classic. 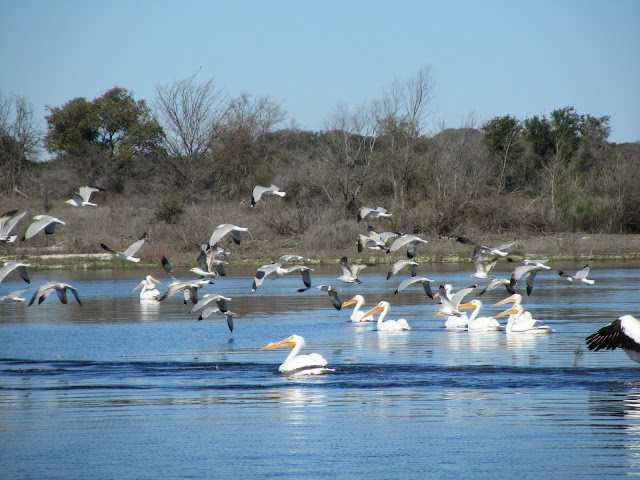 We did see some gar today; a number of them.  One was a  four or five foot long Alligator Gar.  Long flat bill, and a huge girth.  Just cruising along came right up to the boat and right to the trolling motor before diving under us.  The most of the rest were seen easing along the edge of the bank in some clearer water.

We fished our usual lures, T-rigs, rattle traps, swim baits, Spro cranks and spoons.  We did not get a bite.   We fished ledges, flats, points, deep holes and some brushy shore line.  But we found no fish, especially no hungry ones.

Back at the ramp, we met Bob Tucker, owner of Tucker Lumber in Whitney.  Bob was there to break in his new boat… a good looking 23 foot center console.  He was really proud of it and rightly so.   He wanted to trade “tips”… we had no good ones, just eliminated some water for him… nothing doing in the Cedron Creek area.  Bob related that he had a friend who finished 3rd in the Bud Light Trail Tourney last weekend.  He said his friend told him he caught all his bass in Bear Creek and Cedar Creek fishing wood stickups.  We can honestly say, we didn’t go there today, though we did fish Cedar Creek the other day and didn’t do any good.  I don’t think we have ever fished Bear Creek.   We appreciate Bob passing along the tip and we are more than happy to share it.   We also saw several boat fishing the flats toward the back of the upper part of Cedron Creek on the back side of Bee Bluff shores.  Not an area we fish either due to how shallow it is and how stumpy it is… but, maybe that is where the fish are holding, couldn’t say since we didn’t go there.

We gave it up around 12:30 p.m. and went to Sister’s Diner for lunch.  Great meal as usual.  It was a bit sad because it had a For Sale sign out front and Linette confirmed that, in fact, it was for sale.   We always enjoy eating there.  Good down home folks and the meals have always been great.

We made our way back through Blum.  The road repair crew is running the new black top all the way up through Blum.  They lack about 200 yards of black top headed South from downtown Blum.   They are also widening the road from Blum up to 174.  It’s only a two mile stretch, but it has a two lane bridge there that has to be addressed as well as some the shoulders in the deep ditches beside the road.

We also noted about 23 or 24 vehicles at the Nolan River Bridge south of Blum so the whites / sandies must be running.  There appears to be lots of folks down there fishing for them.

We are going to keep pecking on these fish until we find them, even if it takes until April or May.  With us it is just a matter of numbers.  If we go enough times, we will eventually find fish and catch some.