We were back on Lake Whitney today….  We went on down early even though it was a little cool,  40°, when we launched this morning a little before 9 a.m.  But, the sun was out in a cloudless sky and the projected temperature for the day was the low 70s.   There were 4 other rigs on the ramp.  The water temperature was 50°.  There is A LOT OF NEW WATER!   The lake is now down only 2 feet 10 inches.  Its still coming up fast…   It is still very muddy in places and somewhat clear in others.   There is a lot of trash in the water… sometimes on wind blown points, there is so much trash that it is hard to tell the trash in the water from bait fish…. but, if we were believing what came in with our lures, it was mostly trash.    We fished from 9 a.m. until 3 p.m.   The water temperature in the afternoon got up to 55°.      This is an example of how quickly the water is rising… this is the sliding boat dock at McCown.  It was about 6 inches out of the water on Sunday. 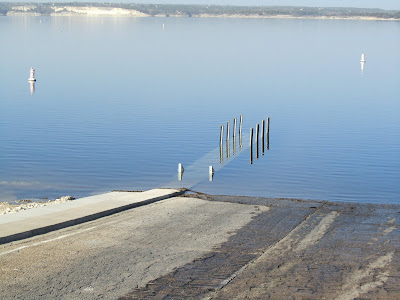 If a person were using this dock this morning, they got their feet a bit wet.  The good news is this is a sliding ramp….   The Corps of Engineers was on the job today and when we got back at 3 p.m… they had corrected the problem. 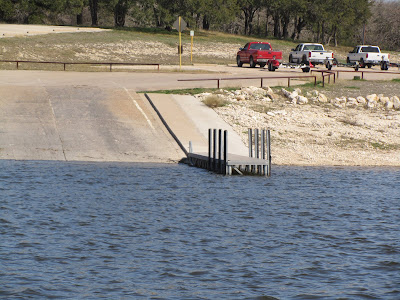 High and dry… just right.   We love those docks.

We fished Cedron Creek, the bridge rip-rap, a couple of spots in Juniper Cove and some creeks up toward Steele Creek.  Just trying to find some fish.  We fished some grassy flats, some shallow points, some deep points, some bluff walls, and some creek channels.  We didn’t get a bite… well maybe the Boss had one bite… a swing and a miss.  We did mark some fish where we had not seen them before and that is a good thing.   We fished T-rigs, square billed crank baits, spinner baits, buzz baits, rattle-traps, and spoons.

There were just a ton of birds all around the areas we fished….  We saw gulls, pelicans, and blue heron. We even saw geese headed north.  And, there were plenty of ducks feeding around the grassy flats.  Mostly they were relaxing and not feeding.  There seemed to be hundreds, if not thousands of gulls in the Cedron Creek area. 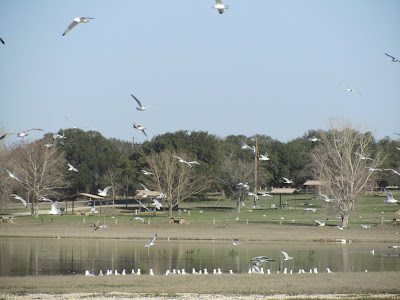 There were also numerous pelicans in the air, on the lake and on the shore line.  These were up above Juniper Cove. 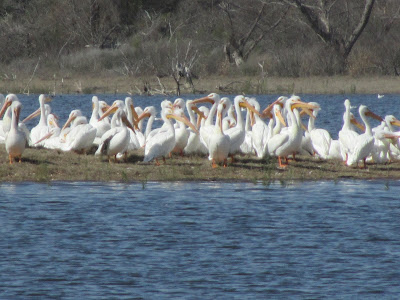 There were several hundred of these pelicans in what appeared to be a nesting area.

The weather was great, the winds generally light.  The wind was supposed to get up around 10 or 11 mph, but we never had any wind above what we thought was 5 to 7 mph.   just a light ripple on the water where we fished.

The good news about the road down is that the road crew was working on paving the last stretch of road between Blum and Whitney.  There was just a half mile section that needed one lane paved.  They were knocking that out as we went down this morning.  The bad news is that they have started working on the short stretch between Hwy 174 and Blum.  Its only a two mile stretch or so, but they will have to build the shoulders up if they are going to widen it as they have the rest of the roadway.

We also noted that the whites must be running up in the Nolan.  There were 10 or 12 vehicles parked at the bridge over the Nolan south of Blum.  Must be that time of year.