Back on the the lake this afternoon and great to be out there too.

It was cloudy with an occassional shot of sunshine.   The winds were light, less than 5 mph, but very cool.   I think it was about 45° when we launched around 11 a.m. and I don’t think it got much above 55° all afternoon.  With the wind, it felt like it was in the 40’s.  The water temp started out around 50° and never got above 52°.   The water is mostly stained.  There was a spot or two where you could see your lure down about 18 inches, but most of the time, visibility in the water was less than 6 inches.  Of course we just fished the McCown area, Cedron Creek and Bee Bluffs.  The water may be clearer down toward the dam.  But, where we were, it never cleared up.  We did not see any big pieces of floating debris today, but the water is still a bit trashy.  It was better than it was last week, but still has a good ways to go, at least in the mid-lake area.  I think the lake level is about the same as it was last week, maybe up an inch or two since we fished last.  I couldn’t get the Texas Water Development Board site to come up so I could check the current level today.

We had one bite and caught one fish.  Unfortunately, it was a White Bass.  The good news was it was a nice sized fish. 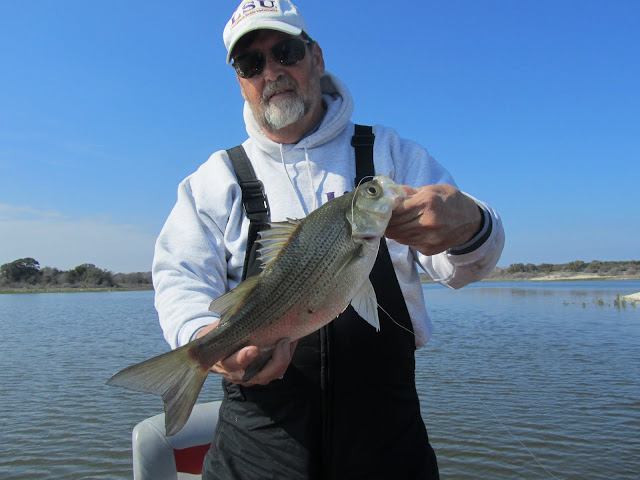 If a person were into catching White Bass, this would have been a big one.  It just swallowed a square billed crank bait on the pause.  I caught it in about 2 or 3 feet of water on a brushy point.

We marked very few fish and then only hanging in balls of bait fish.   We fished spinner baits, swim baits, crank baits, T-rigs and C-rigs.  We fished shallow points, deep points, ledges, and rock piles.   We just didn’t find any fish again today.  It is a mystery to me.  They have to be there somewhere.

There were no active birds today.  They were a few gulls sitting out on the lake and a blue heron or two sitting back up on the banks… but no working birds.  The cows were feeding,  but the fish didn’t get the memo or they were elsewhere in the lake.  Bottom line was we didn’t find them.

That’s it short and sweet.   I think we will test them again tomorrow.