We don’t usually fish on the weekends, but in the winter, you had best take the days that you can so we were out on the lake this afternoon.

Whitney is on the rise… you can almost feel the boat lifting as you sit on the lake.    According to TWDB, Whitney is at 528.9 or down just 4 feet, 1 1/4 inches.   I think with the way water was running into the lake today it likely broke the 3 foot level this afternoon.  I know it was noticeably higher than when we fished on Friday.   The mid-lake area is trashy again.  I would say that in places it was still relatively clear, but where the wind is blowing against the bank, it is muddy.   The air temp this afternoon was supposed to have reached 60°, but I don’t think it got much above 50° or maybe it was the wind chill that made us keep our coats on.  The winds weren’t bad, less than 5 mph I would guess, but it was cool on the lake even with all our winter gear on.  The water temperature was 50° to 52° when we launched around 11:30 a.m., and maybe it got up to 54° by about 3 p.m in the shallow areas.   It was supposed to be sunny, but it was still a bit cloudy when we got on the lake and was for about an hour.

We usually fish during the week and I forget how much I dislike weekend fishing until I go on a weekend.   I just hate all the boat riders and especially the ones that zoom past on a plane when we are back in a creek someplace….  they just have no consideration for other folks who are fishing.   I guess its because we are not “tournament guys” that we feel like this.. but, hey, I guess its their right… not many rules on the water.  Anyway, there were lots of boats there.  The McCown parking lot at the ramp was nearly full when we launched… I think maybe there were 3 or 4 slots open when I parked.

The Boss lit it up when we first got on the water… I started with a rattle trap and she started with a Spro Crank bait….   This is one of two keeper stripers she put in the boat within the first 15 minutes or so. 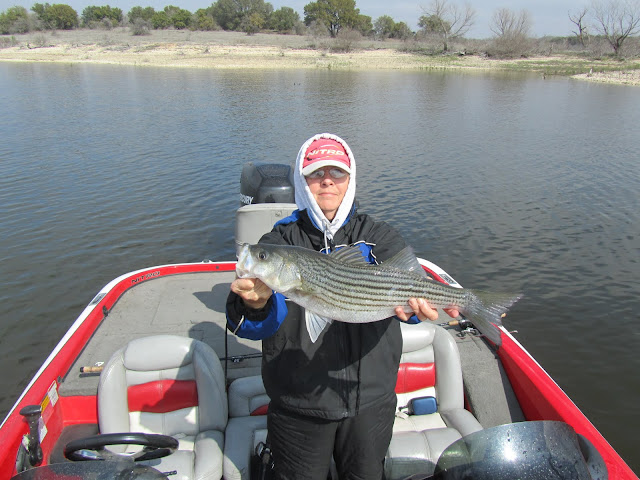 I think we found a school of them on a point.  She put two consecutive fish in the boat and had another follow the lure to the boat.  I tried with the rattle trap and the same lure she was using, but I got no hits… I think it was all in the wrist… she had a way of just twitching the lure as it suspended and they snatched it up.   Not the black bass we were looking for, but some good action to start the afternoon…  The sad thing was it was all down hill after that.

We might have got two or three bites after the stripers, but we didn’t hook up on any of the fish, though she did pull one a foot or so before her worm came out of the fish’s mouth.  I had one bite on a worm and she had one or two more on the Spro, but didn’t hook up.

As I said, the sunshine was nice…. it was just a bit cool… cooler for sure than it was on Friday when we didn’t use any coats at all.    Lots of good looking grassy flats if the bass ever move up into them.  We did see a lot of guy who appeared to be fishing shallow in the backs of the creeks… but I am guessing they were not “catching” since none seemed to stay long.   We saw very few guys fishing the main lake points… maybe they had been reading our mail and knew we were not catching anything out on the main lake.