We were back at Aquilla today.  It was warm yesterday afternoon, above 70°, so we thought the water was going to warm up some.   Unfortunately, we slept late and didn’t get down the the lake until about 9 or 9:30 a.m.  It was cloudy today and the outside temperature was about 65°… very nice.   The water temperature wasn’t as high as we thought it would be.  It was only around 57° when we launched.  The water of course was still muddy, but did not seem as trashy as it was yesterday… but who knows, we were on two lakes yesterday and in my old age, I am not sure I remember which was what.  Anyway, with the clouds, the water didn’t warm very quickly.  In fact, it never got over 62° the entire time we were out there.  The winds were light most of the day, never more than a light chop on the water.

The good news was that we only fished one other spot before we caught our first fish.  It was an 18 incher. 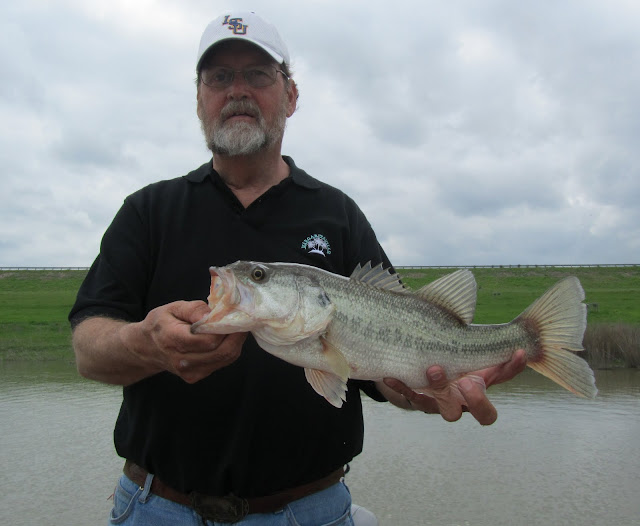 Picked him up on a T-rig.   The water temp there was 58° and was relatively clear…  note the word relatively.    We didn’t pick up another fish until the water temp ticked over 60°, then we picked up three more, all short fish, that is less than 18 inches.  It was like a light switch flipped, they bit, then they quit.

When we got to this flat, there was one other boat in there.  At lunch we visited with this guy and he said he had “only” six today, the biggest was a 5 lb 2 oz fish.  Most of his fish came early this morning he  advised.   He “said” this was an off day for him.  He told us that on Saturday, March 3, he caught THREE 8 lbers, a 6 and he didn’t know how many 3s and 4s.    He said he thought it was the water temperature that turned them on then.  It was 68° on that Saturday according to this guy.  And, he had the needed equipment.  He was fishing out of a 14 foot aluminum flat bottom boat, just perfect for that really shallow water.  I don’t know whether to believe him or not… but, he told his story with a straight face, well that is what you could see of it behind a big white beard and the wrap around sun shades.  He was fishing a creature bait and doing so very patiently.  He fished every bush and stickup around him.  And he moved very slow.  A thorough man.

After lunch, the flat filled up.  It was like one of those little merry-go-rounds with horses.  Boats just circling the flat.  There were 3 or 4 boats in there, everyone pitching and chunking.

We stayed a while, but finally gave it up about 3 p.m.  I wish we had stayed and fished on later in the afternoon.  I really believe that the fish would have turned on again.  Our friend, the fish killer had left about 2:00.

Our day did get a little better… we got home, built a fire in the fire pit and heated up some Early Campbell sausage, baked some potatoes and a couple of roasting ears of corn…..good eating.

It is “supposed” to be WINDY the rest of the week.  I don’t know.  If it warms up some more, we might just chance it again this week.