Another day on the lake… it was a fair day for the Boss… a zero for me. 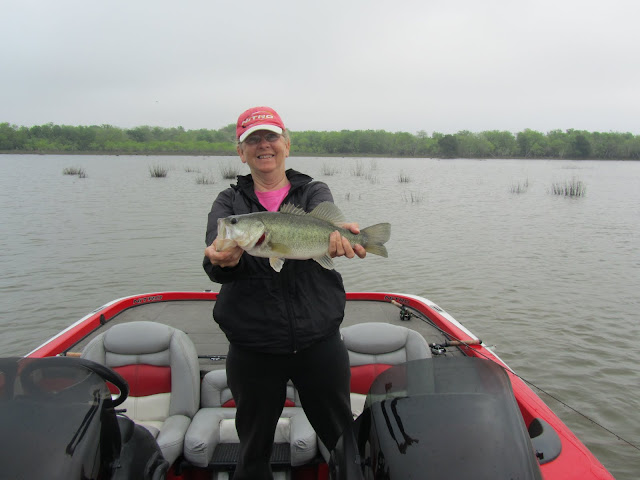 We had such a hot day at Aquilla yesterday, we had to go back again today.  The fishing wasn’t as hot today though the temperature was.  I am guessing it was around 70° when we launched.  I sure didn’t need the wind breaker I brought.  The water temp was about 69° when we got to the area we fish and it soon went into the 70’s.  I thought this would be great.  The lake had dropped 4 to 6 inches since yesterday morning.  I also thought this would be good for fishing.  But, the fish were not as active.  We got on the water right at 7:30 a.m.  The lake is still clearing up, much better than it was a couple of weeks ago, even with the recent rains and flooding.  The water is still high enough that we could easily fish our shallow areas … 2 to 3 feet deep without any problem.  I tried some different lures this morning, first was the white spinner bait… it was of zero value…  looked good in the semi clear water.. but it just didn’t produce.  Second was the Zara Spook… love that lure.  I hooked one really good bass and got it to the boat.. the Boss had the net ready but the fish dove under the net and then under the boat….  it pulled off.  My drag was set too tight…  So, I backed it off and it wasn’t long before I had another strike… a much smaller fish, but with the drag backed off… it ran right into some of those scrub bushes and immediately hung up my Spook… the fish was gone when we got to it.  In the mean time, the Boss was putting 4 pretty good bass in the boat… she was wearing out that T-Rig…  The best bite was on Zoom plum, but they also hit red shad.

We shared our area with 3 other boats. One was the old guy in the 14 foot aluminum boat that we talked to a couple a weeks ago… the guy who said he caught three 8 lbers and a 6 lber on one Saturday…. not to mention too many 3’s and 4’s to count.  Today, he caught 3 fish, only one was a keeper (over 18 inches).

We have seen a number of guys going further back up the “creek” and staying..  like they may be catching fish back further, but we didn’t get to visit with any of them.

There were 3 rigs on the ramp when we launched.  When we came in at 1 p.m., there were more than a dozen.  I think some folks must have taken off on Friday.  We did visit with one guy in a nice new looking Z9 Nitro… he said he had planned to go to Whitney today, but after reading our post yesterday he had decided to come to Aquilla.  He only had one fish today.

The Boss gave me a pretty hard time about losing my big fish today…  but then again, she did get a good look at it as it dove under her net… How do you reckon she missed that fish in 3 feet of water?

My guess is that the lake is just an inch or two above pool level and that the Corps will shut off the gates pretty shortly.  I like it when the gates are open, the fish seem more active…  but, on the other hand, the water will likely clear up even more when they close those gates.  Then again, I have heard the weather reports that there could be more rain by Monday and then the fun could start again.

Did I mention that the Boss put FOUR fish in the boat today… I think she told me that about six times!!!!