We did a double hitter yesterday…   was too tired last night to write up the report…  Had to get a little sleep first.

We got up early and debated about where to go as we fixed coffee and sausage biscuits.  Finally, we decided on Aquilla.  I was concerned about the impact of the rain and cold front over the weekend.  We had been down there Sunday, March 4th but had not had any luck and had not been back since.  BUT, the water temp had been up around 65° to 68° then, and it was supposed to warm up to 70 plus again yesterday and I thought the water would be getting right again.  But, wrong again catfish.  The water temp on Aquilla was about 54-55° when we launched around 9 a.m. and it didn’t improve more than a couple of degrees the whole time we were there.  With the rains, Aquilla is now about 7 inches above pool.  Just a tiny bit high.  The water was muddy everywhere we went and we did search for some clear water, just did not find it; not on the lower lake, and not on the upper lake.  The water was like coffee with 2 creams.  Winds were 8 to 10 from the south according to the weather people, but I think they were lighter than that.  And, it was cloudy.  We fished hard for 3 hours and didn’t get a bite.   We fished top-water lures and plastics.  Should have tried some spinner baits, but didn’t.  There were some 14 rigs on the ramp when we came in at noon.  And, we encountered a number of boats on the lake.  It wasn’t much different than fishing the weekend.  We gave up the ghost there at noon and headed to Whitney.

Whitney is up some more too.  Whitney is now about a foot and 7 inches low.  Really a great level.  Both docks at McCown were functional and if you project that around the lake, I am sure that is true at all the ramps with both floating and the sliding ramps. 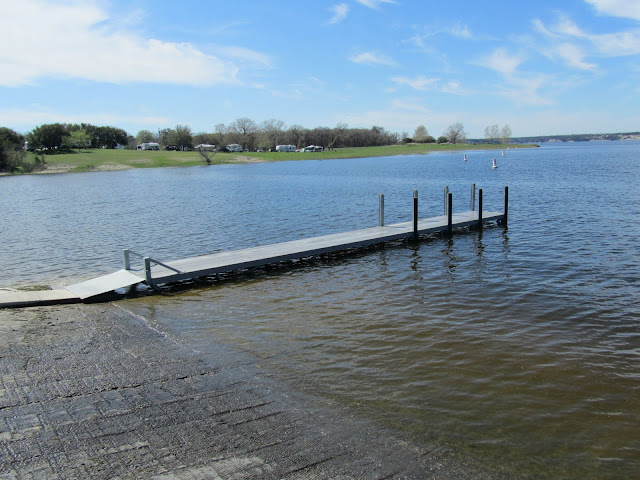 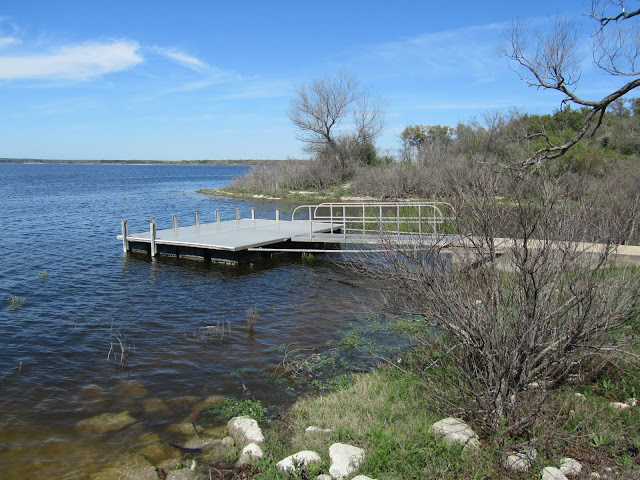 This next shot is from the boat. 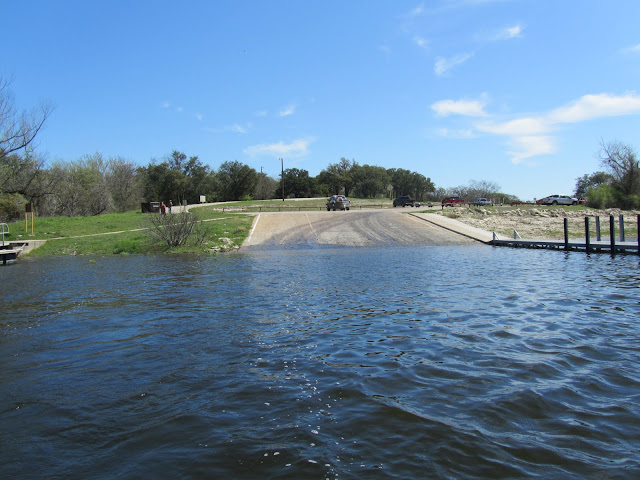 Both docks were in great shape and both were needed.  As we got to McCown park, it dawned on us that it is Spring Break this week.  There were an ample supply of campers and boaters.  There were about a half dozen rigs on the ramp when we launched.   Not our normal quiet week-day launching and fishing.  The water temp at the ramp was over 60° and I thought this was going to be great timing for Whitney… nice warm water and plenty of structure to fish.  We were also pleased to NOT FIND any dead fish lying about the ramp area.  We were thinking that maybe the fish kill had come and gone.

But, as we headed across the lake, we did find a big striper dead in the water.  I am guessing this fish would have weighed about 6 or 8 lbs. 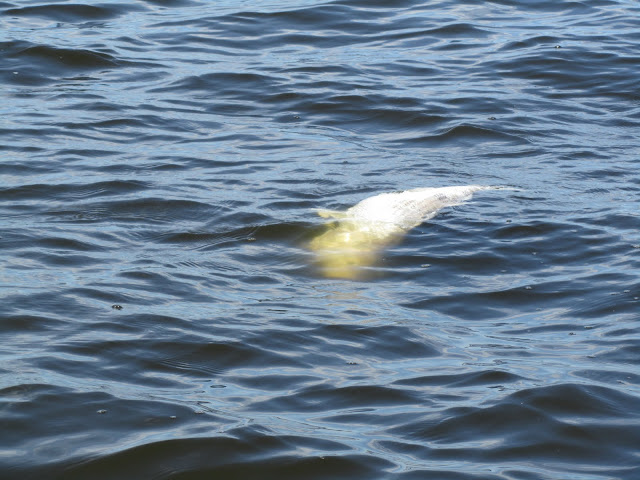 All told, I would estimate that we saw only about 6 or 8 dead fish during the time we fished.  Most of the ones we saw were bigger fish.   This is the only striper we saw for sure, but we did see a dead big gar or two and a few bigger shad or whites.  All the fish we saw were in the decomposition state.  Not a lot of dead fish, but some bigger ones.  There were a lot of birds around, but they were not working the dead shad in the lake like they had been the last time we were here.   We just didn’t see any small dead fish, thus there was nothing like that for the birds to be working.

We fished some of the main lake points and there is great brush and greenery in the water to fish.  We just didn’t find any fish again.  This is a picture of one of the bigger main lake points we fish.  It has 30 foot deep water right off a shallow flat with lots of brush out in the water now. 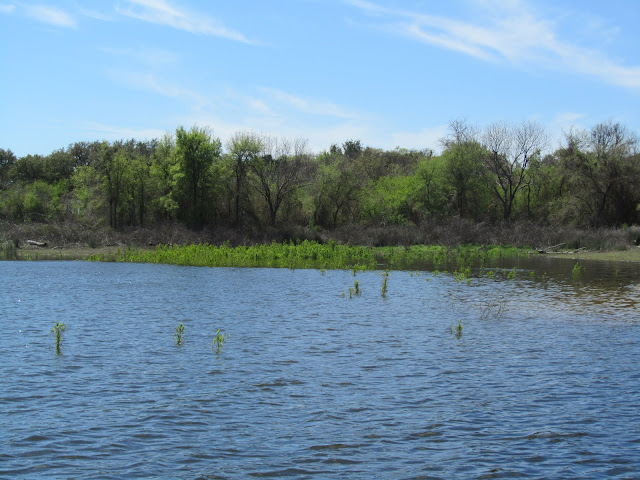 We worked this area over pretty well with worms, top-water, spoons and swim baits.  Nothing.  And there was nothing to be found back up in the creeks that we fished as well.

In general, the water in the mid-lake area is a dark tea colored and it has a substantial amount of foam here and there on the lake.  I am no expert, but I think the foam is a sign of the Golden Algae bloom.

The water did warm on up some in the afternoon sun, but as we fished further down the lake toward the dam, the water was a bit cooler.  Sometimes it dropped below 60 on the main lake points.  I would say the water is definitely not clear, but a dark tea stained color in the areas we fished.

The winds died down and there was only a slight ripple on the water most of the time.   Fishing should have been great, but it wasn’t.

However, we did visit with a guy on the ramp who was wiping down his new boat.  A great looking rig.   He was just pulling out as we were launching.  He said that he had caught 6 bass in the morning, the largest being about 2 lbs.  He said that he had fished the Bear Creek and Cedar Creek areas.  He advised that there were lots of dead fish up in those areas.  But, the bass fishing was pretty good. He had been up there a few days ago and said that he had caught 10 fish the last trip.  He wasn’t sharing a lot of info about what lures he was using or what kinds of structure he was finding fish around.  But, we were appreciative of what he did share.  We didn’t need to see or smell any dead fish so we did not head up the lake.

By the time we got back to the ramp, the Spring Break folks were in full bloom too.  The parking lot had filled up and there were 3 rigs waiting to unload.  But by the time we got around to the ramp in our pickup, another 3 rigs fell in right behind us.  The folks on the ramp were out for the first time this year.  There must have been a dozen teenagers in the bunch and it was like herding cats to get them in the wake board boat and on the two sets of jet skis.  Well, the boat never launched while we were there.  Only one of the jet skis would crank and they eventually pulled the other jet ski out.  We were able to get in and out while kids piled in and out of the big wake board boat… it was like watching ants go in and out of an ant hill… only much more painful.  It took a full 20 minutes or so, just to get the trailer down into the water…   Its a wonder I have any hair left.  I know, whine, complain, whine, whine.

Fortunately, it is going to be windy for most of the rest of the week.  That gives us an excuse to NOT go fishing again this week.  Maybe the lakes we clear up some.  Maybe the Golden Algae will wash out of Whitney.. or dissipate as the weather guys like to say.  And maybe Aquilla will clear up some.. or maybe not.. the high winds and rain always muddy up Aquilla.

At any rate, this is prime time for the spring.  The moon is right, the spawn is right.  The fishing should be right…. or maybe not.   Can you fish in those 20 to 30 mile an hours winds?

On the way back we did count 23 plus pickups and other vehicles at the Nolan River bridge south of Blum.  That means the whites must be running up the river.  I am wondering how the fish kill is up there or if it has cleared up there?  Who knows.  At any rate, you would never get me to walk that mile or so down to the river fishing area….  too old, I am just too old… not for all the fish in the lake.