Yep, it’s today’s version of the old Johnny Cash song…. “How high is the water mama?”…  well, today it is four feet high and rising at Whitney.  Today, Wednesday March 22, the lake level was 537.02 according to the Corps web site for their Texas Lakes.  Yesterday it was 536.02.  But, I am not sure how often those readings are updated.  They say it is “real-time” but who knows.  I can tell you that the lake is coming up fast.

We did not fish today, we just rode down to have lunch with some folks and to take a better look at some of the ramps, especially McCown that we like to fish out of.    We were concerned because the water seems to be rising so quickly and the ramp at Lofers Bend East was nearly under water yesterday and the Lofers Bend Day Use ramp and the Lofers Bend West ramp were closed.

We checked in with White Bluff Resort marina as our first stop.  We had not been down there since our report late last year.  There was little to no water in the marina at that time.  That was not the case yesterday.  The marina is border line flooded. 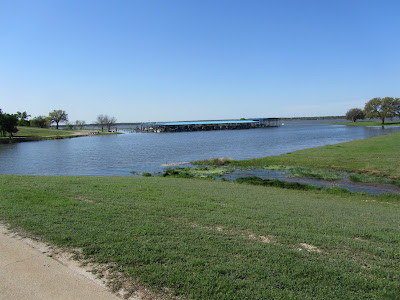 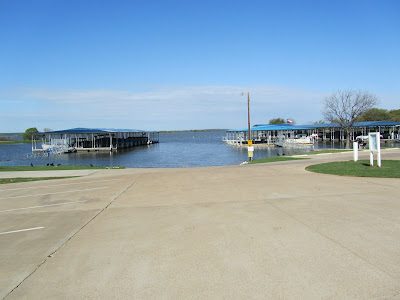 We have been in the marina by boat.  Normally there is a barrier visible between the marina and  the lake.  None now, you are looking right out on to the main lake.  The ramp is still usable, but the water level is right at the top of it.  If the lake comes up much more, it will be over the road at the top of the ramp.

This is the pool there by the marina.  Really looked inviting… much nicer than swimming in the lake.  Maybe a stay in one of the White Bluff facilities would be a better bet than a week end on the water…. 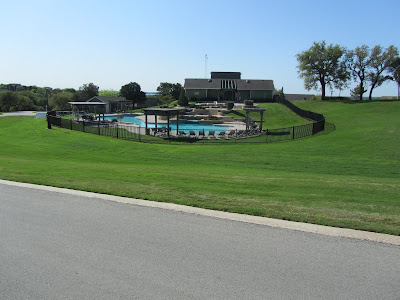 We did a quick check at the Cedar Creek Park ramp.  Water was above the top of the ramp there, but just barely.  One brave soul had launched there yesterday.  He must have used the sliding dock as a guide because you certainly couldn’t see the ramp. 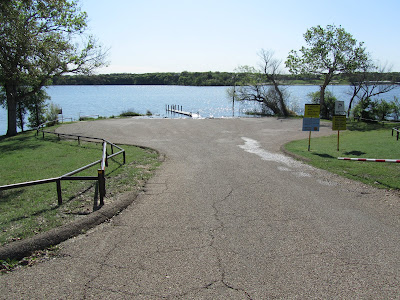 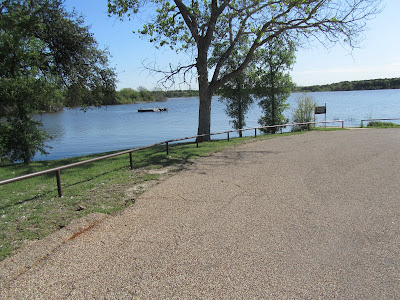 That next photo is of the floating dock at Cedar Creek. You can’t even see the side walk leading out to the dock which is normally in a little creek to the left side of the ramp.    There will be some folks who run over some stuff that is normally out of the water.  Like when the lake was down, there are going to be some new water hazards out there if you don’t know the lake.

Just across the creek, which now looks as wide as the Mississippi, is the Juniper Cove marina.  We used the zoom to get a shot from the Cedar Creek ramp.  It looked to us like the Juniper Cove high water ramp was still out of the water, but it is getting close over there too.  I would recommend checking with them about the ramp before launching. 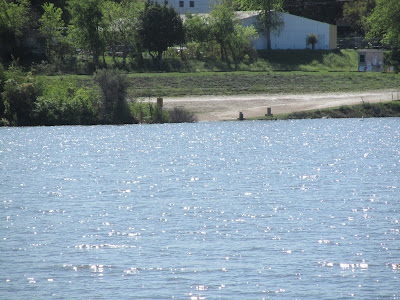 The McCown ramp still has 2 or 3 feet to go before the top of it is under water.  It is still very functional.  There were four rigs on the ramp there.  I didn’t see any boats, but they were out there somewhere.  The lake covers a lot of ground now. 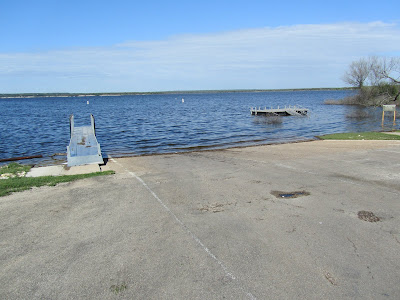 You can see that the walk way to the floating dock is under water, but that the sliding dock still has a couple of feet to go before it reaches the top of the ramp.  The photo below is of one of the camp sites on the cove to the left of the ramp.  They are a bit damp.  I think there were 3 or 4 sites in this condition. 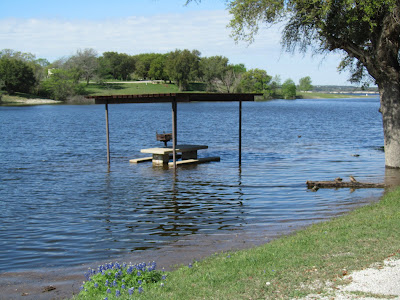 We also made it a point to stop at the Lake Whitney State Park since we missed getting a photo of that ramp in our February ramp update.   We almost waited too late. 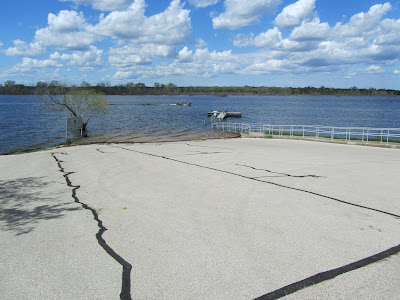 As you can see, the water was at the top of the ramp there too and the walk-way to the floating dock was in “wade” status.  The folks in the boat coming in used the bank to get in and out.  Boy, spring time is a great time to be out in the park.  The State Park has some really nice cabins there.  These are some near the boat ramp.  The State does a good job maintaining the park.  It made us want to go camping!!! 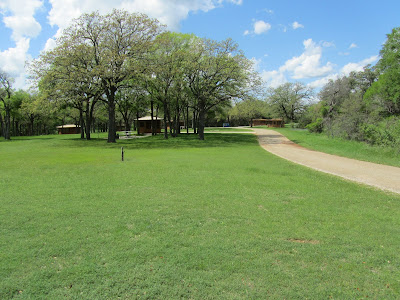 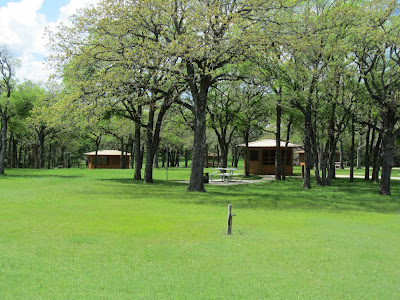 The day use area was a great deal closer to the water than normal…  I would say that you would need to be pretty careful about wading or swimming there.  The top of the bluffs are now under water and you will not see any beach. 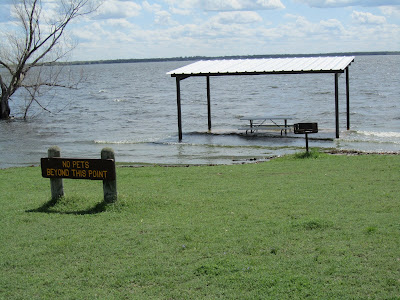 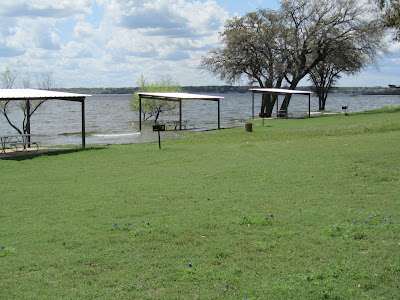 This next photo is from the highway above the Day Use Area at Lofers Bend.  We were there by boat yesterday.  As you can see, the walk-way to the floating dock is under water and so is part of the day use area park.  The play area and the road leading to it, over to the right are under water. 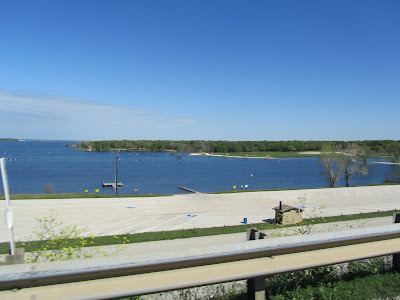 The Day Use Area is  closed for construction, but we thought this view was especially revealing about the water level.

As my Dad used to say, “Its always something.”  Last year, especially in the late summer and fall, we had limited access due to the falling lake level.  Now this, year it looks like more ramps could be closed due to high water.  While we were on the dam, we did note that they were releasing water.  The river was still in its banks, so they were not releasing huge amounts.   I certainly don’t think they are releasing enough to keep up with the amount of water coming in.  We shall see.

Our back up fishing plan to Whitney has always been Aquilla.  We often go there on holidays and weekends to escape the crowds at Whitney, or we will go there when the winds are up just more than we can take on Whitney.   Since we were down there, we made a quick trip over there to check on the ramps there too.

We can always measure things by the ramp at Dairy Hill.  The water level is just under 544 feet now.  544 is the top of the ramp at Dairy Hill and that is about as high as the water can get before you can’t launch a bass boat from a trailer at the ramp.  At that level, the Old School ramp is under water as is its parking lot.  Here are some photos from the Aquilla dam and the Dairy Hill ramp. 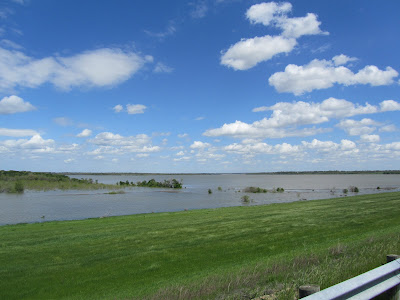 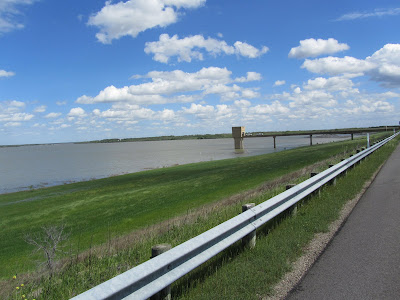 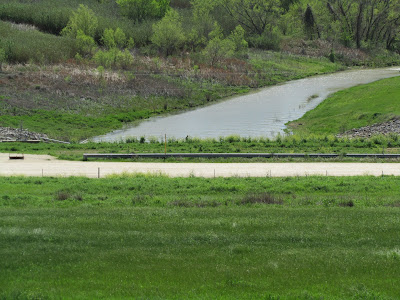 That picture is of the spillway below the dam.  You can see that water is running, but it is a minimal flow.  There were two Corps of Engineers trucks on the pumping station ramp above the dam and two working down by the spillway.  Just speculating, but I think they were working on the gates to the spillway because water wasn’t flowing at the normal rate for when they are releasing water from Aquilla.  But that is just a guess. 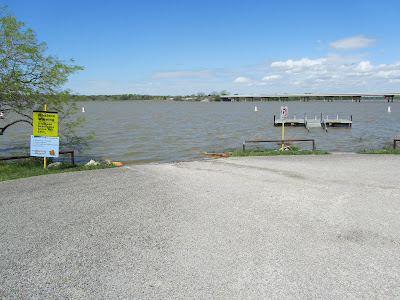 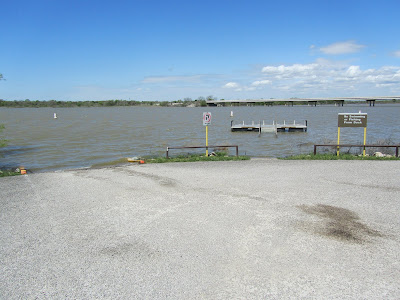 We can tell you this, when they open those gates at Aquilla full blast, the bass will turn on.  Anywhere you can find water running over shallow ground coming out of that back water will be hotter than a pistol.  We will be keeping our eye on Aquilla for the next few days.  If only it weren’t so muddy.

On the way down from Cleburne yesterday, we noted that the Nolan still had a lot of water in it and in places was running pretty hard so water is still flowing into Whitney from the run-off of the rains.  We have also heard that Granbury is releasing water into the Brazos.  So it is water-a-plenty for Whitney.  Hopefully it will not get too much higher.  We have fished it at this level and it is OK.  The lake just needs a week to stabilize and let the trash settle.  This level adds lots of new brush and other structure around the banks to fish.  Lots of shallow water to work.  As long as we can get our boats in, we shoud be able to find some fish.

Just bye-the-bye, we did not see any, that is NONE, dead fish yesterday in any of the locations we checked.  So, I don’t really know what the status of the Golden Algae bloom is.  All I can tell you is that the water is high, the water is trashy, the water is a lot colder than a week ago, the water is dark and not as clear as normal, and that the water is running.  We haven’t seen any evidence of a wide spread fish kill where we have been on the lake.  We also have had reports of folks catching fish.  We have not seen anyone on the lake or seen any pictures of fish so we don’t really know for sure how the fishing is.  We can  tell you that our luck has not been good… but we have lots of excuses….  cold fronts, storms, muddy water, golden algae, you name it.  We just haven’t found the fish this past winter and early spring.  I would say the fishing has been as bad for us on Whitney as it was when we first started over 10 years ago.  Its a good thing we have all those pictures  of those good old biggerns we can go back and look at… and that we have that 8 and 9 1/2 pounders hanging on the wall to remind us that we need to get out there and hunt them down.