Man, this month is getting away… it should be one of the best months of the year… and rumor has it that there are being some fish caught on Whitney by those who know how….

In our case, it is more about excuses….  too windy to fish, the water is rising and is too muddy, its storming, there is golden algae, its spring time and a good time for a double digit at Aquilla… on an on go the excuses.  Just haven’t   been to Whitney much this month and it should be prime time there.   We thought about it long and hard today….  but, it is the day after a night of hard rains, 3 to 5 inches in north Texas.  All the creeks and rivers around here are full and running big time….  Aquilla always jumps a lot relative to Whitney.  After this rain, it will really be up and it will be very muddy and trashy.  So, after the winds calmed down this morning and we got our daily errands done, we hooked up and headed to Whitney.   We really wanted to catch some fish and I needed a first hand look at Whitney.

First of all, is the rain.  There was a lot of it beginning late yesterday afternoon.  We got 3 1/2 inches at the house and we had standing water.  The ground is saturated so lots of what fell ran off.  We have standing water on the side of the hill we live on. 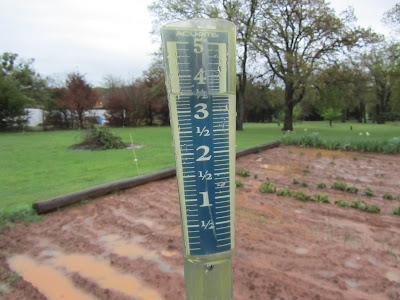 On the way down to Whitney, we noted the creeks we crossed, along with the Nolan River had a lot of water and were running at a good clip.

This article in the Tuesday March 20, Hill County Reporter   Whitney Level Inches Above Normal is chock full of information.  About half way down the article is this little nugget:

“Phillips said that the Corps is expected to retain more water than usual in preparation for a generator test at the Lake Whitney Dam. The manager couldn’t pinpoint an exact date, but said that it is expected to begin in early May, and the release will be continuous for a 72-hour period.”

That is really good info…  fish should be really biting when they turn that water loose.

We visited with the Gate Keeper at Lofers Bend East where we launched today.  She also confirmed some of the information about the construction going on in Lofers Bend.  The Day Use Area remains closed while the Corps is building some new facilities including a play ground, some walking trails.  They are also doing construction in the Lofers Bend West area.  According to the news article, that was supposed to be open April first, but the Gate Keeper said that may or may not happen, it will be close.

The ramp in Lofers Bend East was completely covered.  The water was lapping on the parking lot at the top of the ramp.  The lake is at 536.05, a hair over 3 feet high. 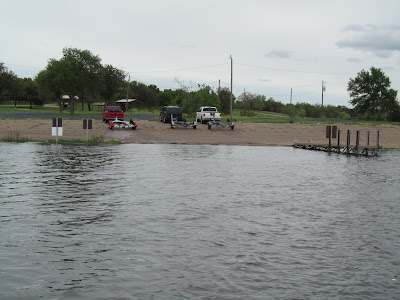 We had to back a good ways out into the lake to get the boat off the trailer.  There is not much slant to the ramp at the top of it.  That’s not to say that you can’t unload there today, but you will be out in the lake to the pickup doors.  With the water rising, I don’t think the Lofers Bend East ramp will be functional for much longer.   Harbor Master looked to be in good shape.  I wish that I had photographed it for this article, but failed to do so.

The ramp at Lofers Bend West looks great right now and should be good even if the water comes up another 3 or 4 feet. 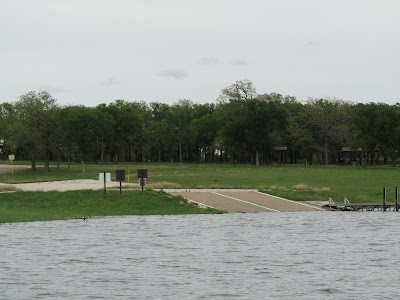 As noted in the article, the Lofers Bend Day Use area is closed for construction.  There are buoys surrounding the ramp that had the Label “No boats.”  The ramp itself looked to be in good shape though.  It looks to be good even if the lake comes up another 4 or 5 feet.  It is just a matter of whether the Corps will open it or not. 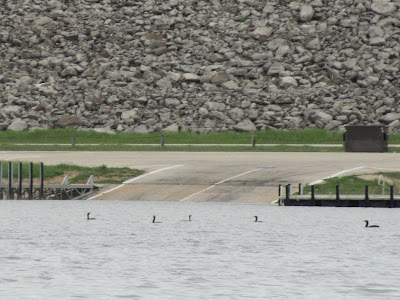 We tried to get photos of all three ramps back in February when we did a ramp update.  We couldn’t get in Lofers East and Lofers West is closed until April first.  At that time, the Day Use area was closed for construction, but we had no idea it would be closed for over a month.  The Gate Keeper at Lofers East advised that she had no idea when the Corps would open the Day use area back up.  This is a photo we got from the road back in February. 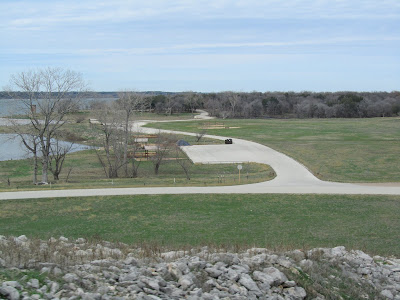 We did pickup a tid-bit of gossip at the lake.  It was said that the Corps was keeping the Day Use Area and the Lofers West Area closed while the construction continues because people had damaged some of the park components which were under construction and that gasoline had been stolen from construction equipment… but, that is all gossip.

What else we saw today was some great scenery.

This is water pouring from a rock bank into the lake.  A mini-waterfall. 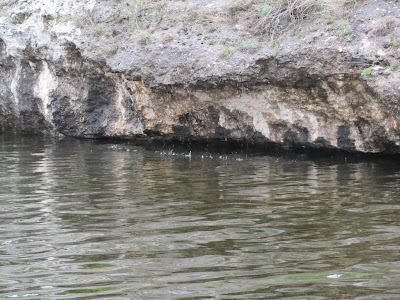 Also great were the blue bonnets.  They were prevalent all around the Lofers Bend parks.  Here are a few photos of those. 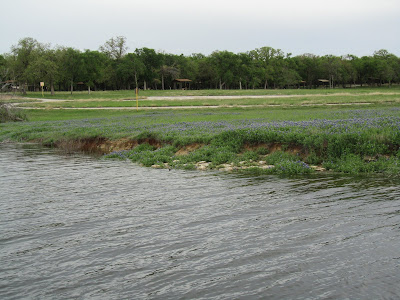 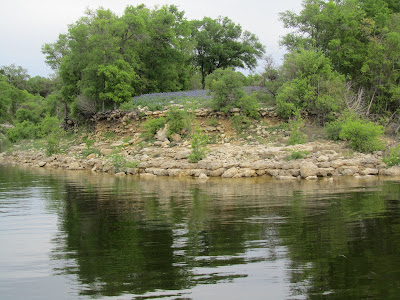 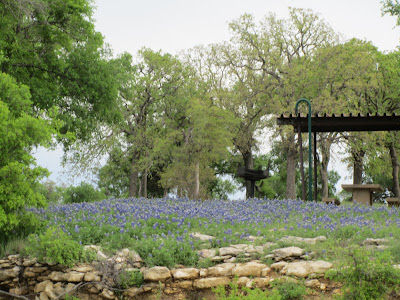 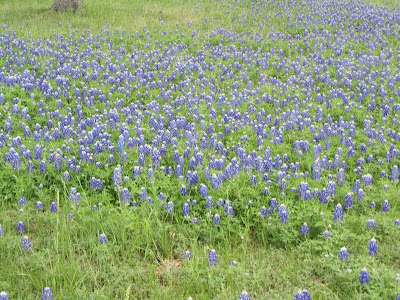 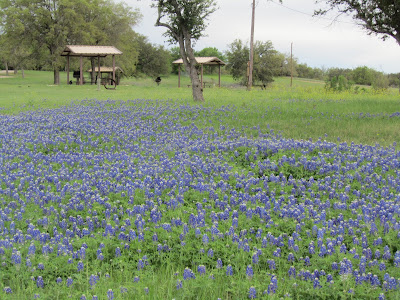 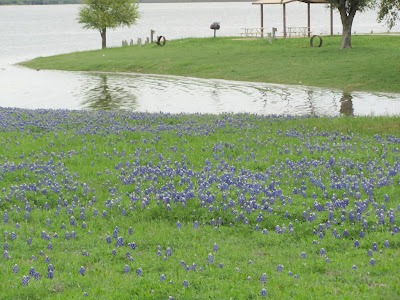 What a great time to camp out.  You could easily get some great photos of Texas scenery.

When we launched this afternoon, the water temperature was about 65°.  When we left about 6:30 p.m, the water temperature had dropped to 62°.  The water is trashy of course due to the rising water picking up debris from along the shore line.  It is also a dark tea colored and not very clear in the lower lake area.  We fished in Rocky Creek and the mouth of Little Rocky as well as along the north shore of Lofers Bend park.  We probably should have been fishing the backs of the coves rather than the main lake points.  We did not mark many fish where we fished.  We also did not see any dead fish in the areas that we fished. If the fish kill is really killing fish, then the birds are doing a fine job cleaning them up.  However, no where on the lake, from mid-lake to the lower lake have we seen any number of dead fish.  I would say that the few we have seen have been a dozen or less each time we have been on the lake.

We fished rattle traps, Spro diving baits, worms, spinner baits and worms today.  We didn’t get a bite.  I think you could sum it up by saying we were not where the fish were.  There were a number of birds on the lake, but there were really no working groups of birds; just a lot of searching.

I will say, you should check the ramps before you make a trip.  It is our estimation that Lofers Bend East will not be functional after today.  The Lofers Bend Day Use  ramp and the Lofers Bend West ramps are closed.  Lofers Bend West doesn’t usually open until Arpil 1 each year, but with the construction under way, it may not open this year.  We did get a look at the Walling Bend ramp on Rocky Creek.  It is good for another 20 foot rise in the water.  I don’t know about Harbor Master, but the water is lapping at the top of the ledge there.  It is likely good for another 5 to 8 feet rise… donno, not for sure, but I would check with them as well.

While we didn’t get any fish, I think we got some good pictures.  I especially like this one. 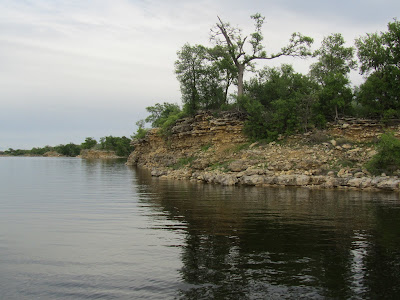