Yep, we were on the lake again yesterday….. our version of Willie’s “On the Road Again.”

You can tell by the photo that it was calm and cloudless yesterday….  if it had been hot, I would have got sun-stroke…..  I forgot my sun-screen and regretted it.  You can also see that the water is still high.  The photo is of the ramp area at Cedron Creek Park which is due to open on Monday, April 1st. The entire ramp area is underwater and the water is up to the edge of the parking lot.  Unless the Corps releases a lot of water, this ramp will not be available to the the Cedron Creek Park campers. 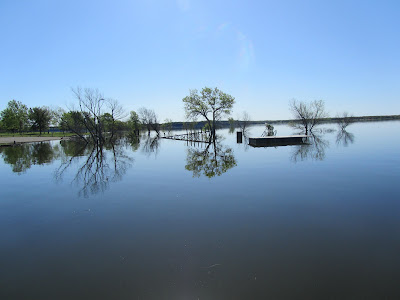 We spent a lot of time on the lake yesterday and a lot of time hunting fish… a lot of time fishing.   We launched about 8:30 a.m.   The water temp when we launched was about 52 to 55 degrees, pretty cold relatively.   The air temp was somewhere around 50 to 52 degrees.  We had and we needed our cold weather gear.  In fact, we kept it on most of the morning.   The lake is still around 4 feet high according to the  Corps of Engineers lake levels data.  The Texas Water Development Board web site said that the lake was higher on the 20th through the 22ond when it stood at nearly 5 feet high.  I don’t know for sure.  I thought it was higher yesterday than on Wednesday when we were down there… at least that’s what I think the photos of the picnic tables at McCown show.    But, the good news is that the TWDB web site shows that the lake has dropped nearly a foot.  The air temp got up to around 77 or 78 degrees by 3:30 p.m. when we left.  The water temperature by then had reached about 65°.  It will be a lot warmer today.  The only relatively clear water we found was up in Juniper Cove.  In some of those little creeks that feed it, the water had cleared and wasn’t too trashy.

This is the ramp at McCown at the time we launched. 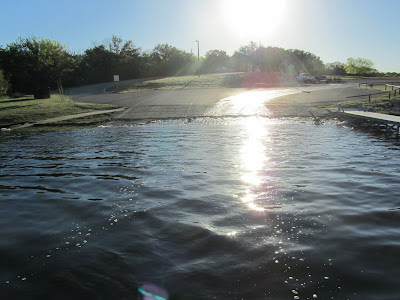 There was only one other rig on the ramp when we put in.  When we came back, there were 17 rigs on the ramp, some number of them were pleasure boats rather than fishing boats.  There was a lot of boat ridding yesterday.  I think folks will be out in force for the nice weekend.

These were the same picnic tables that we photographed on Wednesday.  Maybe it is just me but they looked more underwater yesterday than on Wednesday. 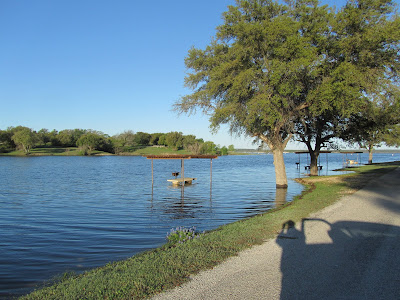 While the water in that photo appears to be blue as the sky, I can assure you it was a muddy brown in Camp Creek, one of the mid-lake areas we fished.   The lake is still trashy and there are some floating logs and stumps as well as miscellaneous trash out there … floating hazards in the middle of the lake so take care if you are out there over the next few days.

In theory, the falling water should help the fishing.  At least that was what I have always believed that falling water was better than rising water.  But what do I know, we are not catching any fish.  I hate writing these reports where I am catching no fish.  We fished the usual, T-rigs, C-rigs, spinner baits, rattle traps, Spro jerk baits, and some top water lures including buzz baits.   We fished shallow water and deeper water.  We didn’t get a bite.  I wish I knew what the thermocline looks like on my Hummingbird graph…  I think I was looking at it yesterday, but not sure… I had a consistent line about 30 feet down.  Most of the fish we marked were below that line.  We found very few dead fish.  There was one area of floating trash near the bridge that held some dead fish, but not an overwhelming number.  The rest of the lake didn’t show us more than one or two.

We did see a couple of fellows having some real fun bow fishing for gar.   At least it looked like fun to us.  We saw them boat one that looked to be four foot or better…  quite a show.  They were working the really shallow flooded areas. 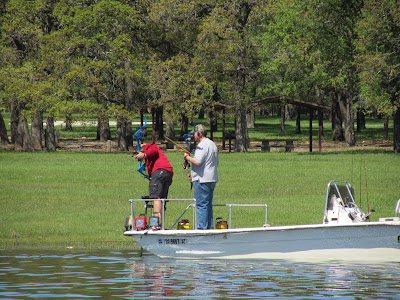 We got a couple of shots of some of the “Whitney wildlife” yesterday too… well, just the pelicans.  They are nice to look at, not so good to smell around their nesting or resting areas.  My advice is to avoid those places. 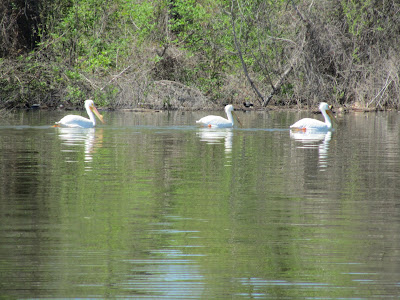 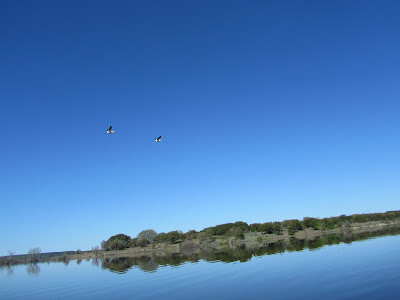 This is going to be the nicest weekend of the year so far.  Supposed to be in the 80’s during the day and cool at night.  Great camping weather.  And, the blue bonnets are in full bloom in the parks on Whitney.  A real nice get away.  If only the fishing would get better.. or maybe I should say, if only I knew where we could find and catch them.