The Boss and I got up this morning and watched old Bill on Honey Hole…  He was having a bad day until his “guide” put him on some schooling fish….  then he caught some small ones.  But, it gave us the fever too.

We hadn’t planned on going this morning.. we thought the wind was going to be up today…   went out and got the paper and it was relatively calm.  It was supposed to be breezy or at least that was what the last weather report I saw said it was going to be.  We had a cup of coffee and the Boss walked outside to check things out… Cloudy just like the last two days and not much wind.  She said, “Why not go?  It is not supposed to be good weather until sometime late next week.”

So, we gathered up our stuff, hooked up and hit the road.  We came to the fork in the road… Whitney or Aquilla, she says “I thought you were going to Whitney?”   I told her that if we were going fishing, I really wanted to go “catching” and not just fishing.  I haven’t seen any information that indicates that Whitney has cleared up any from the Golden Algae.   I just didn’t want to make another trip until I saw something more positive.  So, it was the quick left turn and we were off to Hillsboro and Aquilla…

We had a late start and didn’t get to the lake until 9 a.m.  There were 18 rigs on the ramp when we got there.  It was still really cloudy and even somewhat foggy.  The water temperature was 71° and the air temp was also in the low 70’s.  The wind was a little stronger at the lake than it had been at the house at 7 a.m.  It was just enough to make it “work” to keep the boat in good position.  The water is definitely clearing and the Corps is still releasing water.  The lake had dropped another 4 to 6 inches.

We didn’t start in the flat where we had been catching the most of our fish the last two days, but we had another spot where we had picked up 3 or 4 and those included the 6 lber on Thursday.    But today, not a bite there though we worked the area over thoroughly with top water and T-rigs.  I mean we fished every little stick-up and bunch of grass.  Just nothing.  After an hour there, we headed to the other flat where we had had the most of our luck.

We picked up two fish in the first hour or so and missed some others.  The fish didn’t seem to be as aggressive as they were the other day… we would mostly get some light tap-tap and then they would drop it.  There were a couple of exceptions to that.. I had one grab a worm just as it hit the water and take off…. I set the hook and the line broke…  pretty aggravating.  I think the Boss had one like that as well.

These were two that we did pick up. 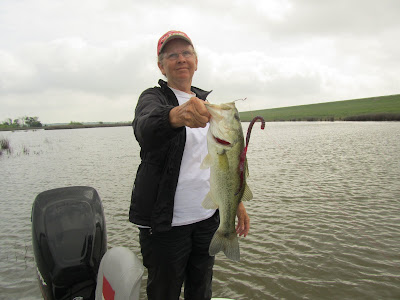 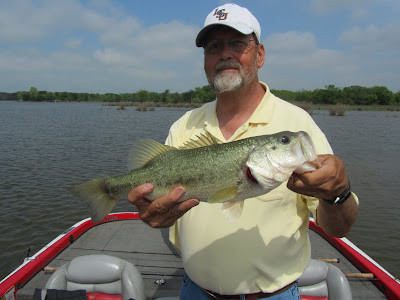 Nice fish, I think both were  keepers on Aquilla.

We fished until nearly 2:30 p.m.  But it was slow and tough.  We did get a surprise today.  During the week, our little flat had had a bunch of boats in it.  Today, there were only two others.  I don’t know where the rest of the folks were fishing and maybe that’s why we didn’t catch as many.  Maybe folks had found a better spot.  I would have to guess it was in the upper end of the lake on the west side because we just didn’t see many other bass boats fishing where we were.

Maybe we will get back over on Whitney next week.  I just want to give it some time to clear up.  Whitney has enough foam on it without needing us to go over there and beat the water.    Supposedly as the temperature goes up the algae will clear up…. sounds good anyway.  We will see.