We were back on Aquilla today.  We don’t usually go 3 days in a row, but the weather guys are saying we are in for a week of windy and/or stormy weather, so we decided to go while we could.  Fishing 3 days in a row gets to be more like work than fun.

We were on the water by a little after 7:00 a.m.  the temperature was about 65 to 68 degrees.  The wind was light.  The water temperature was 70° when we launched.  While Aquilla is clearing, it is still on the stained to muddy side.  The lake is clearest where you can find water up in grass along the shore line.  All kinds of fish seem to be stacking up around the grass patches and clumps along the banks.  You can ease along and spot bass, gar, and buffalo or carp (I never know what those gold backed fish are).   The winds were light.  They were supposed to be stronger than yesterday, but honestly, we couldn’t tell any difference.  At times this morning, the lake was smooth as glass.  It was partly cloudy early, but cleared by 8:30 or 9 a.m.

We fished the same locations as yesterday.  We caught 5 fish in about 4 hours today.  The Boss had 3, I had two.  The biggest was about 3-3.  We both lost a couple of other fish.  I had one jump and throw a spook and another broke off a worm…   I think the boss caught her fish on t-rigs and I caugh mine on a Spook. 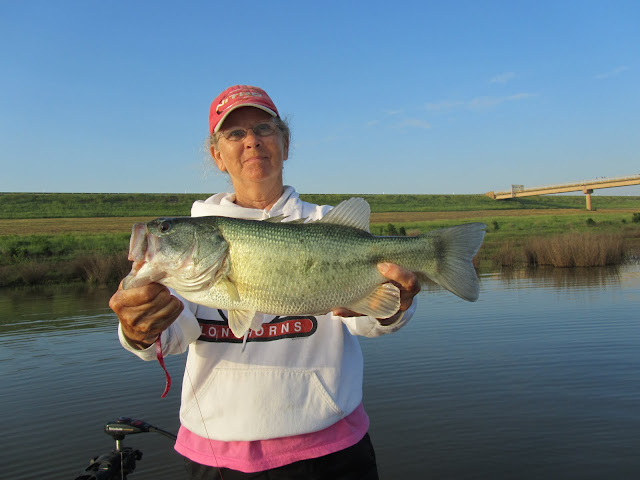 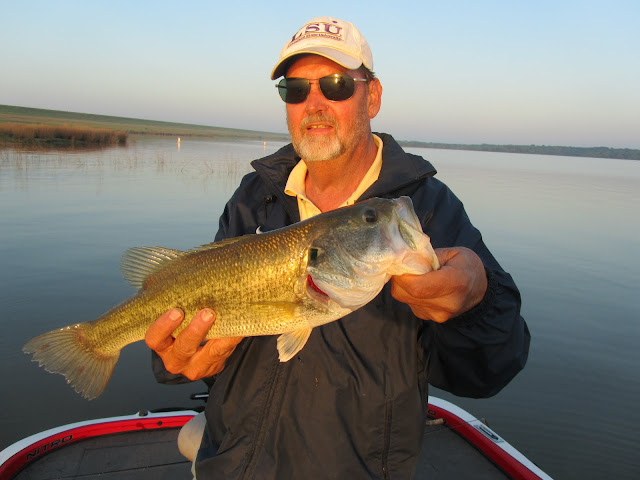 We caught our fish early, in the first hour.  After that, they shut down on us.  The wind finally came up around 11 and we hooked them to the house.

I don’t know when we will post another fishing report… maybe some of the folks we know will send us some.  Anyway, we put the boat in the shop today.  Its a busy time of the year for boat repair.  We dropped it off this afternoon at the BassPro Outlet on I35 south of Fort Worth.  They said they would try to work us into the schedule.  Anyway, there was some issue with the steering and we definitely wanted to get that fixed before we went again.   We have our fingers crossed that they might be able to slip us in.