Yep, we were back at Aquilla again today….  Over slept today… Dang, I hate it when that happens.  Was about an hour late getting to the lake.  We launched about 8:00 a.m.   The air temperature was near 70°…   the water temperature was also about 70°.   The water continues to clear up.  It is getting really clear in some of the grassy areas.  The lake level, according to the Texas Water Development Board web site was up just a fraction, at .91 of a foot high over .87 of a foot measurement yesterday. Maybe this is true….  I donno.. I heard the siren yesterday for opening the gates, and the water appeared to be a little lower this morning going by the places we fished yesterday and today.  Gov’ment says its up… looks down to me…. does that sound familiar or what?   Anyway, it was a little cloudy and hazy this morning.  The wind was down… I would guess less than 3 mph most of the morning.

We started out with frogs and missed two or three right off..  The Boss did put the first fish in the boat though. 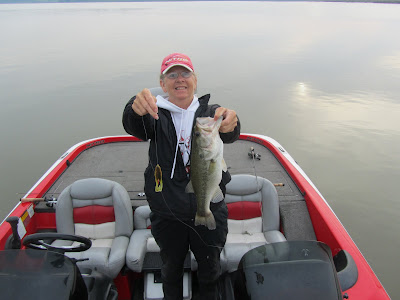 This was an 18 inchers that gobbled her frog.  She was really excited about it.   She wore out another dozen frogs today; kept asking if there was any way to repair them.

After my misses, I switched from a frog to a Spook…   My first fish with Spook was a 4 pounder… 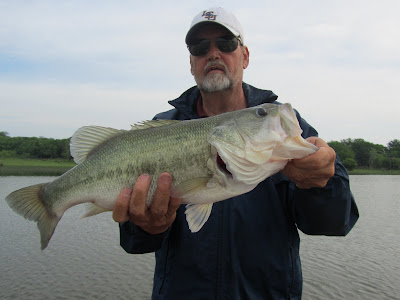 It was a fun fight in about 18 inches of water… lots of stuff for it to run around.   We lost several fish today.  They were close to structure like they were yesterday and we just have to contend with fish running around grass clumps, limbs, brush, logs and fences…. and then breaking off.  If a person knows how to flip and can quietly ease around the stuff, they could throw a bunch of fish in the boat.

We only caught 4 today, but they were all quality fish.  No real big ones.. the largest was the 4 pounder.

This is another one… a little two and half pounder jerked out of the bushes. 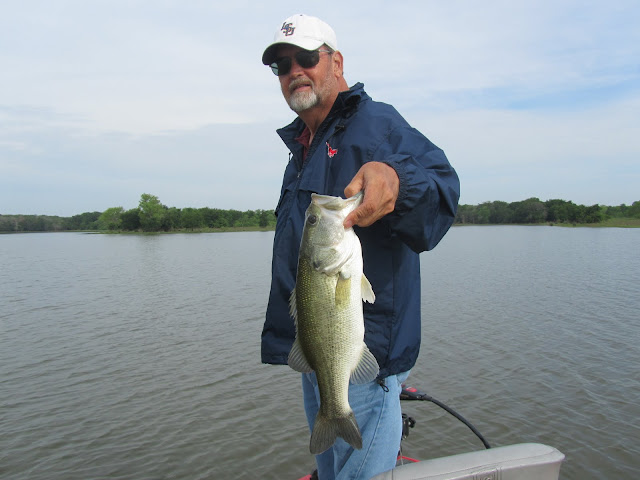 We probably spent way too much time with the frogs… for one thing we got there late.  We had a hot top water bite first thing…  I had a strike on the first cast and the Boss caught that fish on her second cast.  We missed several others shortly there after… and then I likely made the mistake of leaving that spot to look for a better one.

We fished until 1 p.m.    Fishing slowed considerably after the first hour.  It was just pitching to one shallow water clump of grass to another.. then to the brush…   a lot of fish were right up on the bank.  There were a lot of carp or buffalo or whatever those gold backed fish are that make so much commotion along the banks working.  But the bass were there as well.  I have noticed that there is a correlation between the activity of those fish and bass.. if the carp/buffalo are working, the bass will be active as well.. And, they will be in the same area.

We should make a trip back to Whitney… that’s the lake we write about… but, it is hard to just go fishing when you can go catching.

One other small issue… The Corps of Engineers project to upgrade the ramp rest room at Dairy Hill seems to have come to a halt…  it has been several weeks and it just seems like there has been little to no progress…  makes it tough on an old fisherman.