A great day on the lake even if it was a Saturday!

That Dairy Hill ramp was busier than a Walmart parking lot on Christmas eve!   Even the over-flow parking lot was filling up.   When we got to the ramp there were already 7 or 8 rigs that had unloaded and disappeared.  Three were in line ahead of us and before we got in the water, the rigs stretched back over the hill to the house there on the property…. Man alive!  I have never seen so many people at that ramp at one time.    I didn’t know if we were going to be able to find a spot to wet a hook.

We got there about 6:15 a.m.  We had got up a little late, (at 5:05, the Boss yelled “ARE WE GOING FISHING OR WHAT?” I had missed the normal 4:30 wake up alarm.) but the old red Gimmie made up some time on the highway.  I am sure it didn’t help my gas mileage any.   It was  a bumpy start…  when we turned off 22 to head down that country road to the lake, we were behind a old pickup pulling a pontoon boat….  He was a nice guy (I thought) and he pulled over and let us by.  (He told me while we waited on the ramp that his truck just died; he had a battery cable come off.)  Then we got to the ramp and it was b-u-s-y!  We got in line behind one fella, another was on the ramp unloading and one was lined up to unload.   The guy on the ramp got right out of the way and boogied on down the lake, following two boats that were already in the water.   The guy who was lined up to back down must have been a newbie…. he jack-knifed his trailer twice while he wife waved him on back to the ramp.  It took 10 or 15 minutes, but he finally got the boat in the water and his wife did a fine job parking the truck and trailer.  The next guy was a pro and he was in the water before the other guy could get to the dock.  We were right behind him.   Late start and then a delay at the ramp…  the sun was already up… dang it.

We motored on to our preplanned spot for the day only to find two boats already there.  We stopped aways a way and started fishing and one boat left.   And we soon learned why… the other boat was a 14 foot jon boat with one guy in it… he was motoring that trolling motor all around about an acre protecting his spot.  He had that thing on high and it must have been doing 20 or 30 mph as it zipped around.   He was following some sporadic breaking fish.  He hollered and told us that he had been “tearing them up.”  Did I mention that we were LATE!    He said he had caught a bunch of bass, but that he had come for the white bass and he only had ONE black bass bait in his boat, but that it was working great.   It was a shallow area and he was beating that trolling motor against the bottom and constantly hanging up his one and only lure.   He was excited…   That went on for another hour or so.  We patiently waited fishing an alternate spot.   Some whites started breaking down lake and he cranked that 25 and headed down the lake.  For an aluminum boat, that thing could fly.

We eased over and started working our spot.  The top water bite was long gone… gone before we even got there apparently.   So we T-Rigged and C-Rigged.  It was a good hour to an hour and a half before we had any bites.   I lost two right off…..  didn’t retie my hook on my T-rig and the first bite broke on the hook set.  Then I lost another one.  then the Boss caught one.  I lost another one that threw the hook; I didn’t hammer the hook set like I did the first one.  Eventually, the Boss caught 3 and I caught 4.  Not a great day, but not a bad day given the rough start.

Here are some pictures. 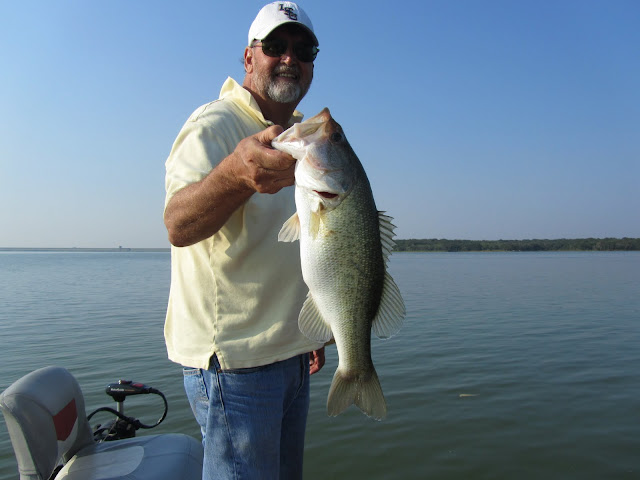 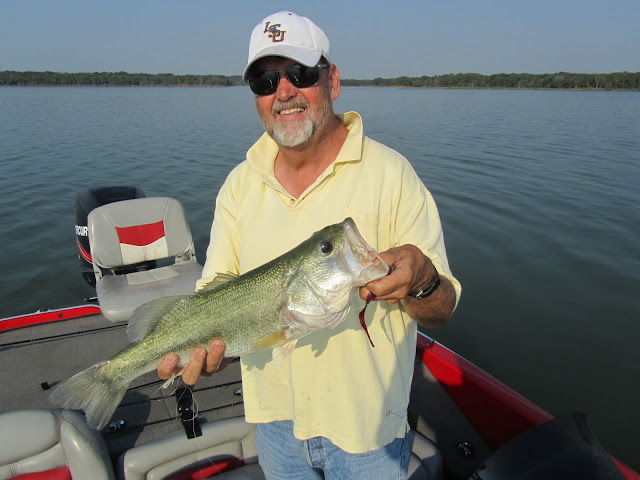 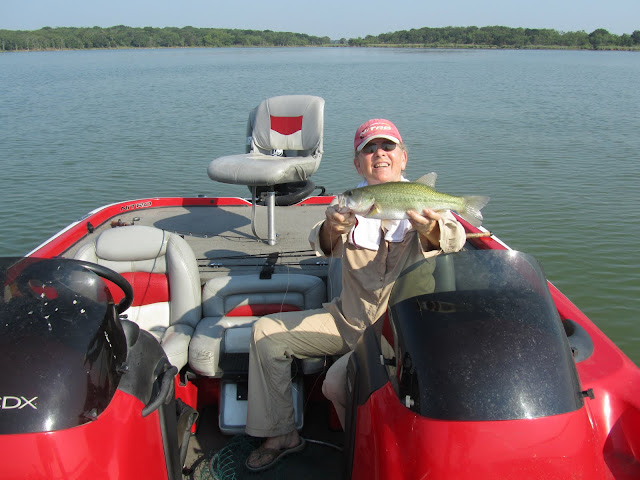 The Boss didn’t want her picture taken… she wanted to catch a fish… an 18 incher plus! 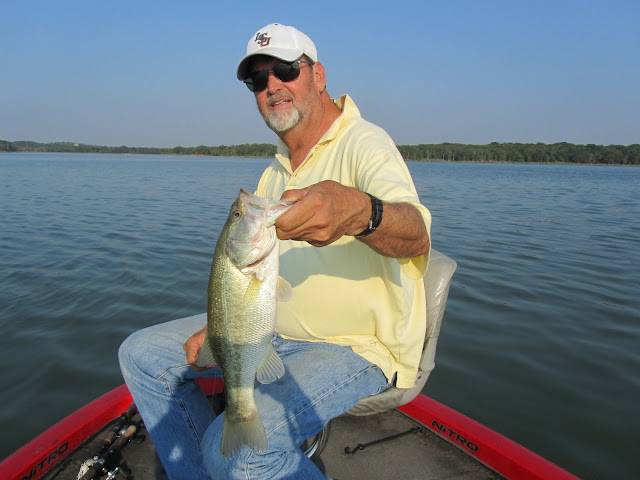 It was HOT!   It was well over 90° by 10 a.m.  The water temperature climbed to 85°.   The water was that greenish Gatorade color.   The lake is down about 4 or 5 inches.   Its current level is 532.15, just down from normal pool level of 533 feet.   The water was relatively clear with visibility about a foot or two.   The ramp is in great shape, the parking lot though was filling up quickly.