Well, yes we went “catching” today… trite as it sounds…  that is the way it is.

But, we were at Aquilla today.   We launched from the Dairy Hill ramp as we usually do.  I was not happy with whoever the idiot was that turned over the Porta Potty.”   Some folks actually need those things as despicable as they are.  Anyway, both Dairy Hill and the Old School ramps are in good shape with the lake level at near normal.

We launched at 6:15 a.m.  The air temperature was in the high 70’s or low 80’s.   The water temperature at launch was 79°, but it had warmed to 85° by 9:00 a.m.   The air temperature also zoomed up there.  It was 92 or 93°  when we came off the lake at 11 a.m.  There was little to no wind.  The water barely had a ripple on it.  The good news about the low wind was that you could see fish working for a 1/2 mile or so, and they were working.  Lots of shad working and lots of fish working in them.  There were whites and bass in the shad.   The whites were more out in the middle, the bass worked the shallows and closer to shore.  The bad news was that they moved like NASCAR racers on a re-start.   We just could not get to the bass in time.  And, we could easily tell they were bass by the size of the strikes.  There were some good sized fish working on those shad… they were chowing down.  Actually, that activity lasted all the time we were out there, but we just could not get within casting distance of the fish.

Aquilla was considerably lower than the last time we fished.  I am guessing that it is about a foot lower.  The Texas Water Development Board web site says the current level is 537.03 and that normal is 537.50.  That would put the lake 6 inches low.   I donno, my gut feeling is that it is a foot lower, but these guys are the experts.   The water isn’t clear, but it is not muddy.  It is a Gatorade shade.

We did boat 7 bass, but they were all smaller than the 18 inch minimum at Aquilla.  But, hey you can’t complain about the size after fishing on Lake Whitney… at least we caught some fish.   Here is a shot of one of my smaller ones… the Boss thought it was funny… 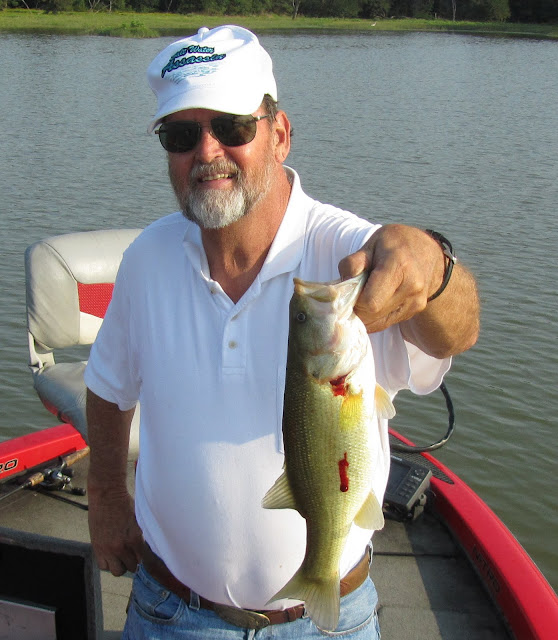 Of course I had the last laugh because today I had six fish and she only had one.  (Hey I thought it was five and two.)   I managed to keep the boat positioned just right today.   By the way, that is my “backup” hat because my LSU hat was knocked in the lake when I was boating my first fish or maybe it was my second…  Anyway, things were fast and furious early, then they slowed down considerably.

I did make the mistake of moving us off of active fish to go search for some bigger fish.  I just picked the wrong spot and that move cost us a couple of hours of good fishing.   That’s the rule:  Never leave biting fish to go find some more!

The pattern on Aquilla is the typical summer time pattern of shallow fish and active shad.   What I can’t figure out is why this pattern is not also in play in the mid-lake area of Lake Whitney.   This is the time of year that we usually catch a lot of good fish early in the morning while they are working shad or other bait fish in shallow water.  Not this year; it just ain’t happening.  We have 25 or 30 locations where we have just caught bunches of bass in the past.  None of those places are producing currently on Whitney.   I have talked to some of the folks who fished the Bohemian and the Fun-N-Sun on Whitney.   My personal opinion, and it is the opinion of some of the guys I talked to as well, that it is the bait fish.   I used to say it was “location, location, location” on Whitney… Now I say it is the bait fish and shad.   If you can find active bait fish and shad in shallow water, you will find some bass.  And, I don’t think the lure matters much when they are feeding.  As one guy told me, you could have thrown rocks at them and they would have hit them.

Anyway, we had a fun day today on Aquilla.  We caught a few fish and saw more activity than we have in a while.   Maybe we should have gone back to Whitney, I had some good info on a potential spot where bass are supposedly working some shad…. but…   I really wanted to catch some fish rather than just going fishing.   Now we have rain supposedly coming in and we have a three day commitment we can’t get out of… so no fishing likely until next week…  that’s a bummer too.

So bottom line, if you just want to catch some fish and maybe luck into a big one… Go to Aquilla.  There were 7 rigs on the ramp today.  We were the first boat out this morning and the first boat back at 11 a.m.  I think the rest of those guys were having a good day.  If you want to go to Whitney, take some binoculars and hunt the breaking bait fish and bass in the shallows.