Yep, we were back on the lake today…..

Got on the water at 6:10 a.m., launching from Cedron Creek.   The wind, according to the Internet Hour by Hour was supposed to be about 2 to 3 mph.. it was more like 8 to 10 mph… a little brisk to begin with.  But, not so strong that we couldn’t fish our fav-o-rite fishing hole.  The air temp was in the low 80’s.  The water temp was from 76° t0 79°.   The water is generally clear in the mid-lake area.   The lake level is generally stable… up just a couple of hundredths at 732.64.  Supposedly that is about 5 inches or so low.  Anyway, the lake has been staying right around that level for some time.

I thought with the cloud cover and the light winds, that it would be a great day…   I didn’t get a bite.  The Boss had two bites and she boated one of them.  This is a 3.0 lber.   Picked him up off of a pond dam.  Lucky her! 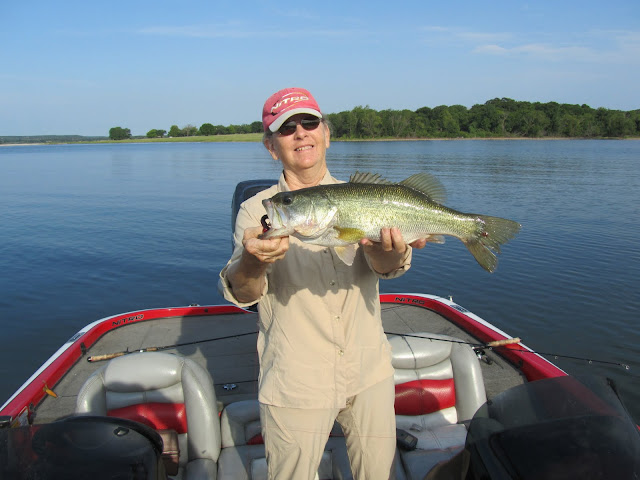 We fished top water early:  Frogs and Pop-R’s.  We fished over shallow grassy flats and over rocky points.   We fished T-rigs spinner baits.  The Boss wore out a Spro shallow diving crank bait.   The Boss’s fish came on a T-rig…. was really a “bite”… not the tap-tap variety anyway… it just gently picked up the worm and began swimming off…  She hammered him.

I had a hard time making up my mind this morning…   I really wanted to go to Aquilla and hunt some of those good old biggern’s.  But,  I keep thinking Whitney will turn on.   Then once we committed to the drive to Whitney, I wrestled with going to Lofer’s Bend or to Cedron Creek.   We ended up at Cedron Creek because the wind was out of the North West and even a 5 to 10 mph wind on Lofer’s Bend can be a hassle to launch in.   So, there you have it.   I had a spot or two on the lower lake we wanted to try, and we did.  We just didn’t get down there until after 10 a.m.

What I do think, as I reflect on the Bohemian and what I know about it… and our own experiences of late is this:  To find any numbers of big bass or any bass, we are going to have to find some schooling fish.  That means finding some bird activity and then the schooling bait fish.  Then they are going to have to be near the shore, otherwise, they are likely to be stripers or whites.   That’s my un-educated guess.

Anyway….  that’s the report for today.  If you have a better idea, I would like to hear about it.