We are as happy as old Willie Nelson when he sings “On the Road Again”…  We were on the lake again….  We have our boat back….  It has been 3 weeks or so since we have been on the water.  It seems like 3 years!  Just about had to learn to cast all over again.

We were on the water about 6:15 a.m. this morning…. We launched from the Cedron Creek ramp.   It is in great shape.  The air temperature was 65° with light winds, that is 5 to 8 mph from the North.  The prime time today was something like 5 p.m. to 6:30 p.m.   We wouldn’t make it for that….  we like the morning times even if they are not the best times.  And, for the most part, the cows reflected that.  On the drive down, most of the cows were “laying down” and that is never a good sign.

The water temperature was 76° at launch.  I think the water is about the same as it was three weeks ago when we last fished, mostly clear, but still stained with tiny particles in it in places.  The lake level is 532.71 feet according to the TWDB web site.  That is about 3 inches below normal pool of 533 feet.  What you can say is that the lake has been at a near normal stage since around March 1 this year and has generally been very stable.  There are lots of areas with submerged brush and weeds / grass that should be productive, but we have not found any sweet spots in the mid-lake area where we fish the majority of the time.  The winds continued to lay down and I would put them at 2 to 3 mph when we left the lake at noon.

It was a tough day.  I think I had 3 bites on a T-Rig and the Boss had none.  I boated one 14 inch fish…  a Kentucky Spotted Bass I believe. 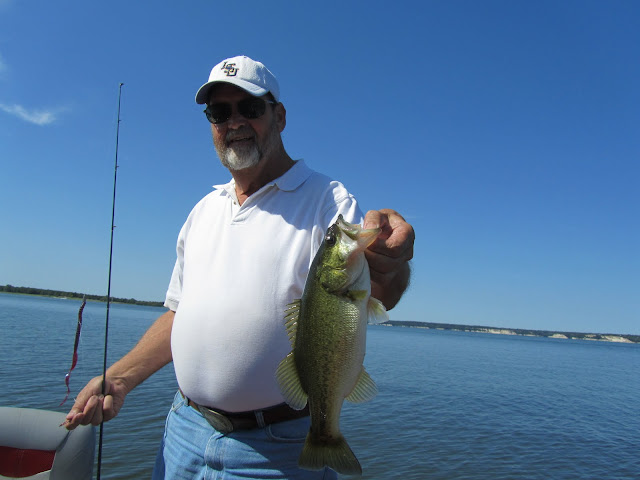 About the best I can say is that I didn’t zero, though it appeared that we would.

We did fish a number of lures, crank baits, spinner baits, top water (Spooks and Frogs), T-Rigs and C-Rigs.  The issue was that we just did not locate any fish.  The only fish we found on the graph was in 30 to 35 feet of water in the middle of some deep creek channels.  They were mixed in with some schools of bait fish.

One good sign that we saw was that there were more birds on the lake than there has been recently.  We saw blue herons and white cranes feeding in the shallows.   They didn’t lead us to any fish, but hey, they are back and that means they are finding something to eat…. or maybe not… some of them were pretty darn skinny.

We had planned on fishing the lower end of the lake in the morning, but the wind is forecast as 10 to 15 mph from the south tomorrow so that would make it a bit tough for us on Whitney.  And, the parks seemed to be relatively full today; at least McCown Valley and Cedron Creek Parks seemed to have plenty of campers in them and quite a few seemed to have their ski boat, wake-board boats and jet ski’s with them.  We saw plenty of “pleasure boats” but only 2, maybe 3 fishing boats.   Sooooo, I donno if we will go back to Whitney or not….   Maybe we will just watch old Bill Wilcox on Honey Hole while drinking some coffee on the sofa… Or, maybe we will go to Aquilla… I just don’t know.  Depends upon the wind in the morning.  As much as I would like to fish, I am just not big on fighting the wind.

Just bye-the-bye…  We did notice today that Sister’s Diner is still open….   Its a great place for lunch or a late breakfast….  and they don’t mind if you come in smelling fishy after being on the lake.   The food is great and plentiful.  Maybe you can give them a little business and help to keep them open.  They are good folks.