Well, it was Whitney at Aquilla today…. sort of, because we had a hard time catching any fish today.

It was the first chance this week that we had to get back on the water.   We had a brother with heart trouble that we had to see about the first part of the week and then it was just so dang hot we couldn’t make ourselves go…  But finally fishing fever got to us and we hit the lake again this morning.  Up at 4:15 a.m. and to the lake by 6 a.m.   It was still pretty dark when we got there, but by the time we got the boat in the water it was starting to get good light.

It was pretty warm this morning, near 80° when we launched.   We were the first on the lake at Dairy Hill ramp today, but there was another fella right behind us.   The water was warm too, also near 80°.   The lake level is 536.97, just a tad over 6 inches low.  The lake seems to be holding its own and the Corps is not releasing any water and apparently none is being pumped back up to Cleburne.   The water in the main lake was fairly clear, the usual green Gatorade color.  But, back in some of the shallower water, it was muddy.  We could only attribute that to the wind and there was some wind this morning.  It wasn’t too bad, about 7 mph according to the Internet’s Weather.com.  The ramp continues to be in good shape.  However, the Corps of Engineers has not finished their work on the restrooms.   Maybe Obama cut their budget and we are stuck with a half finished restroom and a Port-a-Potty.   🙂  Its been a while since we have seen any work going on there.

We got right on our off-shore hump and flat where we had been catching fish.  But, this morning, there was no surface activity.  We might have seen one or two bass strike, but those were “maybes.”   We held on there in the wind for a good hour, but did not get a single “for sure” bass bite, though I either had one white or a small bass slap at my Zara Spook.  The Boss caught one white that jumped on her bait as she was lifting it out of the water.   We finally got tired of it and headed to the flats around the dam.   I did pickup one bass there on a worm.  It was a small fish. 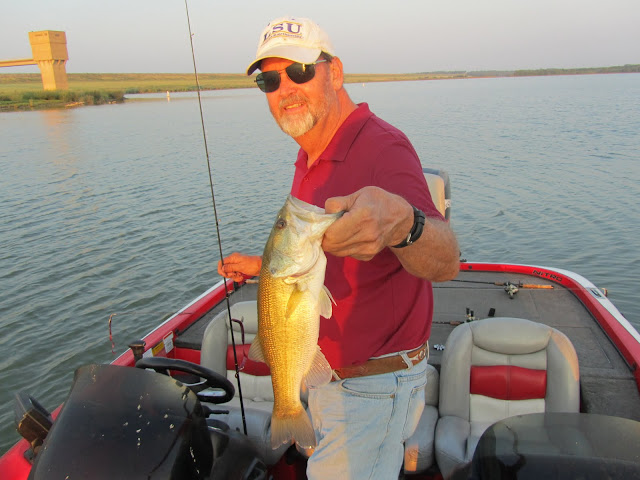 “Some is better than none” is what my Dad used to say.  And small is better than none.   I also picked up a white on a Rattle-Trap.  There was some sand bass activity in the dam area and I got lucky enough to pitch into a small group of those busting the water.   There were some pretty big schools that came up down there, but they were not staying up.  I would say they would be on the water no more than 5 to 10 seconds before they disappeared.

We fished a number of our spots, but those were the only bites we got.  I don’t think The Boss got a single bite.   It was a really tough morning and I had a hard time in the wind keeping the boat positioned so she could fish the good spots.  (That’s a joke, he never let me within 10 feet of a rock or stick up all day…) The cows weren’t feeding… they just seemed be enjoying a morning stroll by the lake. 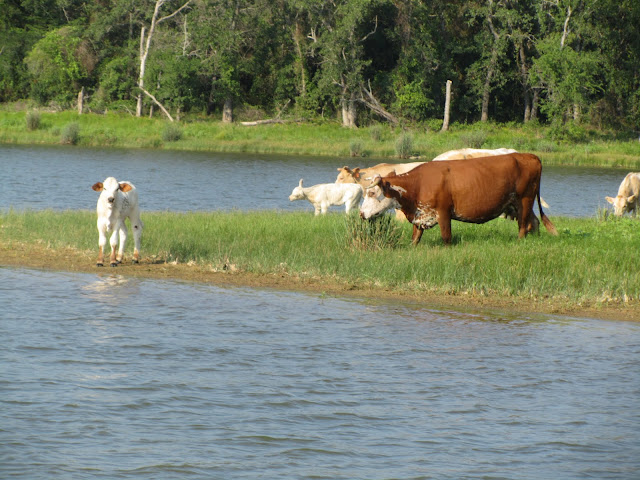 These came down on a point we were fishing and tried to help us out by wading out and running the fish out to deeper water… assuming there might have been fish up there on that point.   Lots of new calves.

Yep, it was a lot like Whitney on Aquilla this morning.  Lots of fishing and not much catching.

We did have two other boats stop by and visit.  They were readers of the blog.   It was nice to chat with them.  One fella mentioned that he had not seen any sand bass activity this morning, but he had not been down by the dam when we were.  They were there, just not as many as there had been last week.  And of course when he headed off toward the Old School ramp a school broke out in front of us.  We blew the air horn in attempt to get his attention, but I don’t think he ever heard it.   Anyway, the fish only stayed up a few seconds.

We were tired of the wind by 9:30 a.m. and were off the water and loaded at 10.   There were 6 other rigs on the Dairy Hill ramp when we left.   We hope their day was better than ours.