We were back at Whitney yesterday and today….  just fishing….  not catching.  We zeroed.

We launched from Lofer’s Bend East both days.  The ramp is in great shape with the water level just a foot or so below the top of the ramp.  Pool level is 533 feet and Whitney has been relatively steady at or just below that.  It is at 532.55 feet today and has hovered between that and normal pool for several weeks.

We had some good info on locations that produced during the Bohemian and Fun-N-Sun tournaments and we had been wanting to test them out.  Zero, nadda, nuttin.  Just a couple of water-hauls.  Our understanding was that there were active shad in these areas during the tournaments, but we saw nothing yesterday and today…  However, there were some white cranes working the shore line in the area….  just no active fish turning anywhere we could see.

We thought that with the clouds there might be some extended “catching” but it just wasn’t so.  Could be we were not in exactly the right places though we thought we were.  Or maybe we didn’t have the right lures… though we used what we were told to use….   Just no luck.  As my Dad used to say, “You aren’t holding your mouth right!”  Most of the time though when I was fishing with him I thought it had more to do with how he was holding the boat.

My personal belief is that the bass are following limited numbers of bait fish and feeding on them.  And, the bait fish and the bass are moving.   A person just has to be lucky enough to find them.   If the golden algae had any impact, I think it might have been on the bait fish.  We are just not seeing as many.  But, I need a biologist from TP&W to tell us what they have concluded that the story is.

There were 4 other boats fishing out of Lofer’s Bend East yesterday and 2 others today.   No one we spoke to was catching any fish this week.  We did hear a lot of grumping about the Golden Algae killing all the fish…  but that was mostly speculation.  I don’t know what the issue is.  I do know that this time last year we were catching a lot of fish on main lake points and they were feeding on shad and other bait fish.  We found them with the help of a lot of birds working those same bait fish.   Not this year.

We did note this helpful information at the Corp’s information sign up near the rest rooms.   Well, it was info we had looked for before, maybe it will help you.  It is the phone numbers of  “some” of the manned parks. 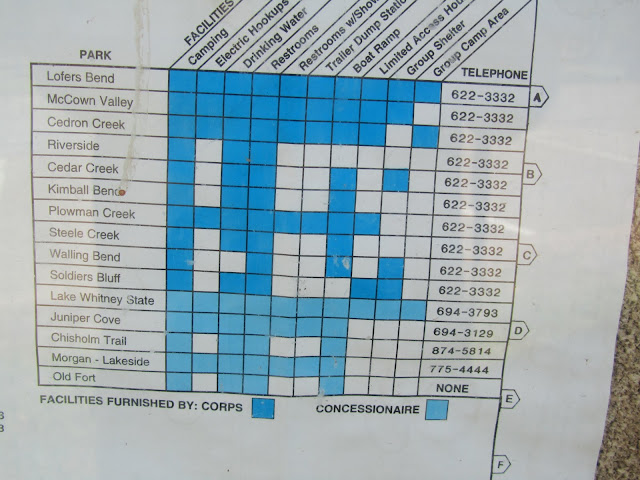 The winds need to die down some for us to enjoy fishing…  we don’t like to fish when we have to work at it.  Also, we need the fish to bite some so that it is fun!

Yep… that’s the way it was today and yesterday at Whitney…. an empty hook!