Yep… we were back on Aquilla this morning….  A little windy…. I kept my life vest on initially. 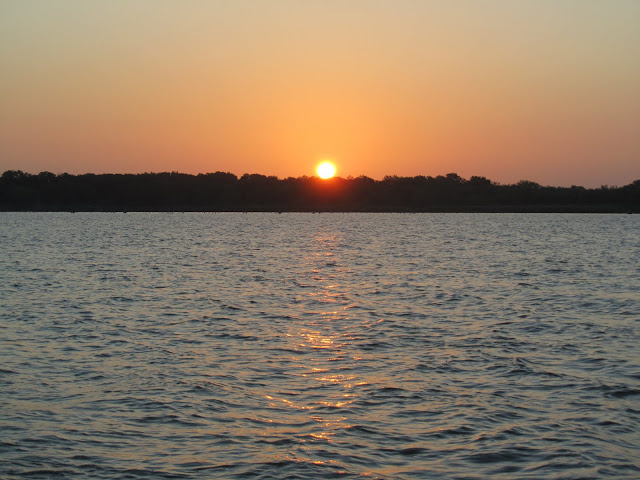 Second cast produced this short fish..  It bit a H2O top water.   I thought this was going to be a great day because I hooked a fish so early. 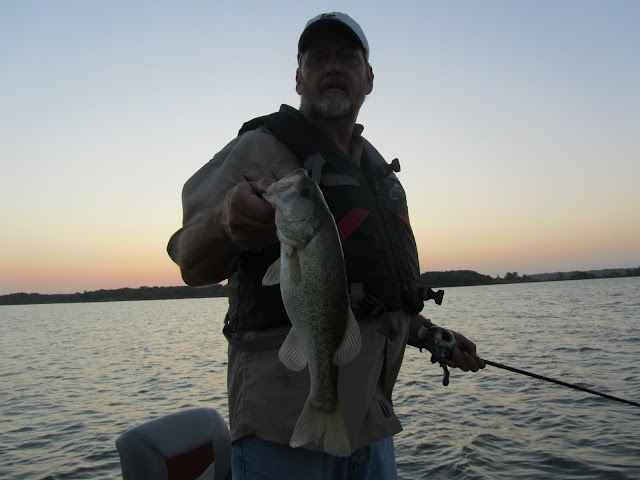 We were up at 4:30 a.m. again…  cooked up some sausage biscuits and hot coffee, hooked up the boat and headed to the lake.   We could tell it was a little windy.  We wanted to make a trip to Whitney, but the weather-lady last night said it would be 10 to 20 mph today….  too much for Whitney for us.  Actually, the wind got up pretty quickly on Aquilla and it was tough fishing the open water humps.    Just had to stand on the trolling motor to hold the boat.

We worked the bass for about an hour and a half with no additional luck.  But, the whites / sand bass were repeatedly breaking around us and we just couldn’t resist.  The Boss broke out a Spro 25 and a chrome slab.  I stuck with a Rattle-Trap that was already tied on.   We probably boated a good 2 dozen fish… all small like the white bass at Whitney tend to be.     For the bass, we tried top water lures early, then T-Rigs and C-Rigs.  The wind actually made it too rough to do much good with the worms.  We just could not feel the bite.

There were two rigs in the parking lot at Dairy Hill when we hit the water about 6:15 a.m.  They were long gone. One was a pontoon boat, the other looked like it could have been a bass boat rig.  The lake is still slowly dropping.   The TWDB recorded level this morning was 536.76 or about 8 inches low.  I don’t know why, but when the lake officially drops an inch or two, on the water it looks like 6 inches.   It was about 80 degrees when we launched, the water temp was 82°.   Actually with the wind, it was fairly comfortable the entire time we were on the water.   There were no clouds, sunny was the word.  Winds started out about 7 to 8 mph and I believe they moved on up to around 10 to 12 mph by 8 a.m.  We hung in there until about 9 a.m. but the wind seemed to be getting stronger and we wern’t catching and the trolling motor was wearing me out so we left.   We should have gone to Whitney and fished Juniper Cove, but we probably wouldn’t have gotten to enjoy the sandies schooling.  The water remains fairly clear for Aquilla on the main lake.   Again, it was muddy back in some of the shallow flats.  We found zero activity in the shallow coves.  But the whites were working pretty much all over the main lake.  They weren’t staying up long, but they were coming up fairly often in relatively the same areas.

There were 8 rigs on the ramp when we got back to Dairy Hill, so business had picked up.   I think most of those folks were fishing for white bass.   We did see 3 boats come out of the cove from the Old School ramp.  Two of them headed up lake past Snake Island.  One of them chose to come by and check us out then head over to Dairy Hill side of the lake.