We made the trip to Whitney today…  we still think it will come back, we just don’t know when.   But, unless we fish there, we will not know what is going on for ourselves.

We were on the lake by 6:10 a.m. this morning.  There was no one else on the boat ramp at McCown when we launched, although there were one or two boats beached on the shore in the camping area.   We saw 3 other boats on the lake this morning.  We pretty much had the lake to ourselves.   We made the trip to some old favorite areas up above Juniper Cove and just below Steele Creek Park.   The water was stained at best.  The water temperature was about 85°, the air temperature was around 80 to 81 degrees.  Winds were very light in the areas we fished on the west bank.  It was definitely a Willy Nelson Blue Skies Day… nothing but Blue Skies did we see…. 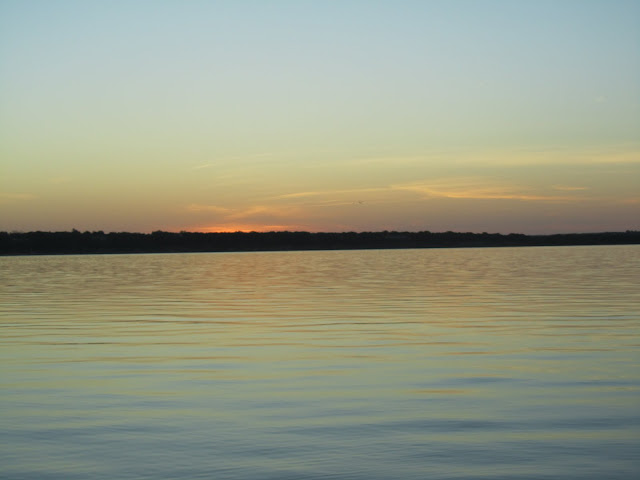 We fished shallow points, long points with deep drop offs, some coves with lots of wood structure, and some rocky bluffs.  Nothing, nadda, zip, zero.  Not one bite.   We also fished some of the rocky points and bluffs down at Juniper Cove… still nothing.   We marked very few fish on the finders.  There was some minimal activity of what could have been bass chasing small shiners along the shore line in the shallow coves, and there were a number of blue and white herons feeding in those areas.  But, we could get nothing to bite.  We fished, Pop-Rs, H2O top-waters, and frogs.  We fished crank baits, and T-rigs.   There were just no takers for us.

We fished for about 3 hours and by 9 a.m. it was 87 or 88 degrees and HOT!  Had we been getting a bite or two, we might have stayed with it.  But it was just too hot to be out there and have absolutely no action.   When we got back to the ramp, there were two rigs on the ramp.   Not sure whether they were fishing boats or pleasure boats.  A wake board boat launched just as we left the ramp area.

About all we can say is that Whitney has us buffaloed this year.   We just have not been able to get on any fish there.  I think our next trip there is going to be up in the river.  We have pounded the mid lake area and fished the lower lake some… just no luck on the main lake.  It’s time for a change of location.