We noted right off that the orange plastic construction barriers were gone from around the restroom…  We thought we had some progress for sure.. turned out the doors were locked… and the Port-a-Potty was still the “go-to” facility…  donno what the status is, but peering through the doors, it looks as though the facility is still not ready.  Maybe the Corps of Engineers ran out of Obama shovel-ready money.  Who knows.  At any rate… the restrooms are not functional at the Dairy Hill boat ramp on Aquilla. 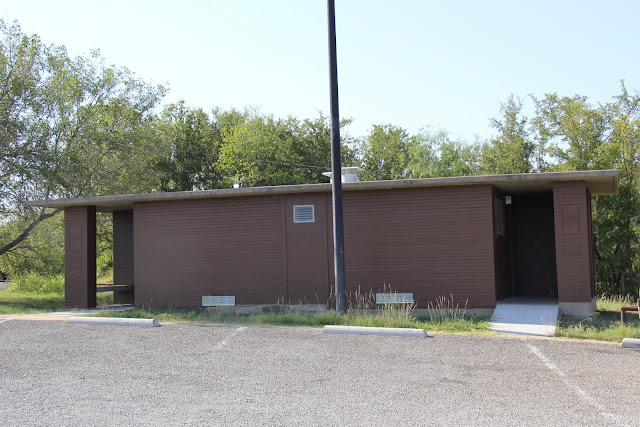 The paint job on the outside looks good anyway and the door locks work really well.

We were the second vehicle on the ramp this morning… don’t know where the first guy went or what he was fishing for.  The temperature was pretty warm, I think it was  in the low 80’s when we launched.  The water temperature was 86°.  The winds were light, less than 5 mph out of the south west when we got out on the lake.   The lake is just a little less than 2 feet low.  It seems a lot lower than that.  The areas we fished seemed to be a bit murkier than usual.  The lake had cleared up some, but not so much now.  Along the wind blown shore line, there was a red mud lines two to three feet out from the shore.

Fishing wasn’t great today, but we did get some of those tap-taps.   We fished a little top water, but there was just no surface activity that we saw.  Well almost no surface activity.  At one point we did have a small school of whites come up right at the boat and The Boss put one in the boat on a crank bait.  I didn’t even manage that.

The Boss put the first bass in the boat early.  This was caught on a c-rig. 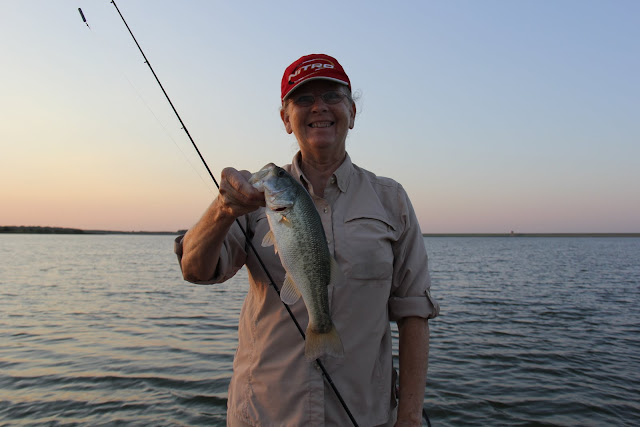 Small, but still a fish.  Not long afterward, I got a tap-tap and told The Boss.  She said she had one too…  We had our first two-fer in a long time…  We managed to put both in the boat.  The Boss said that she would take the picture since she had already had her picture taken.  I think she just didn’t want her picture made with THREE small bass.

These were caught on t-rigs. 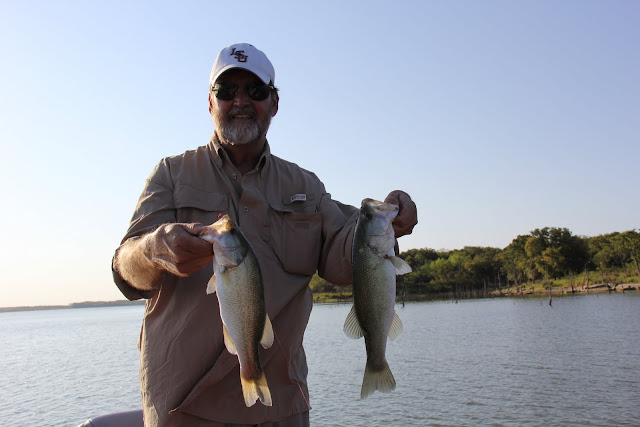 These two were small as well.  But a bass is a bass.   And, they only count if you get them into the boat.   No keepers today.. that was it 3 small bass and one white, but a better day than the one we had on Saturday on Whitney.

It got hot on us quick.  We were off the lake at 9:30 a.m.  Got in 3 hours of fishing.   I don’t know whether to believe the sign or not, but as we were coming back through Covington, the temperature sign at the school showed 93°.  That is hot for the time being prior to 10 a.m.   Too hot!

We did notice that the white cranes or whatever they are were congregated in one of our favorite coves….  we gave it a pass today….  no need to disturb the birds and have them drop in on us. 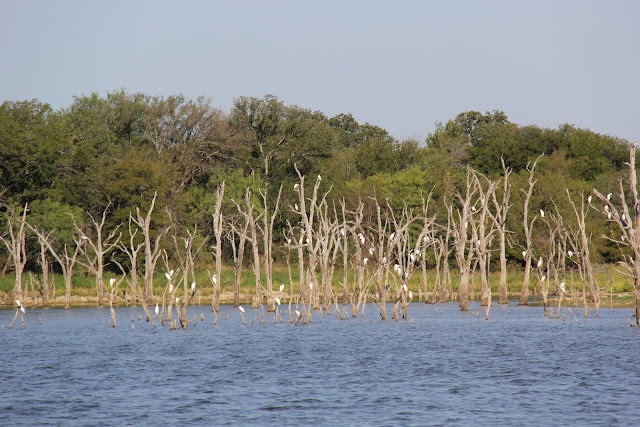