And, yes it was the “blue moon”… the second full moon within one calendar month….   We heard all about it on the way down to the lake this morning.. Hal Jay on WBAP was explaining all about the history of the blue moon event….  we are now educated.   According to Hal Jay, Blue Moons occur once every two or three years when there are two full moons in the same month.  It happens because the moon rotates around the earth every 28 days and months are longer than that so, every once in a while, you have a Blue Month.  The first picture was taken about 5:30 a.m at the house, the second was taken a few minutes after 6:30 a.m. at the ramp. 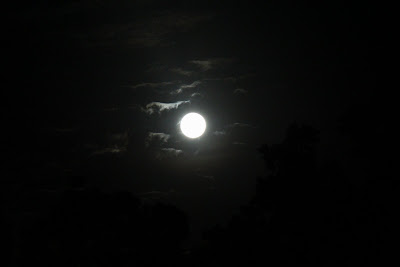 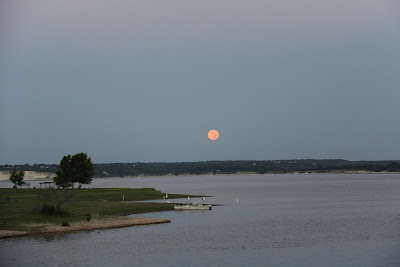 I like this one which is a little closer … 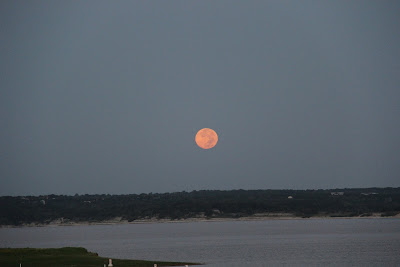 The wind was supposed to be down this morning; projected between 5 and 10 mph.   It turned out to be even less wind than that..  I am guessing calm to 2 or 3 mph.   The lake level is down, now at 528.46.  This is a touch over 4 1/2 feet.   Not bad and the fall rate is pretty slow.  The water temperature this morning was 81°, the air temperature was 78° when we arrived at Lake Whitney’s McCown Valley Park about 6:30.   There were some clouds off to the northeast; I would assume they were remnants of Issac, but not sure.  Anyway, by the time we got out on the lake, it was basically cloudless.  It was one of old Willie’s “Un-cloudy Days.”

The ramp at McCown remains in good shape.   The stationary boat dock is all but out of the water, but the Corps has slid the sliding dock on down and all is good there. 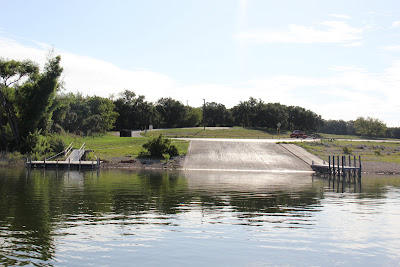 Well, we fished all of our main lake points with the usual lures… maybe we should fish something else….  We fished Rattle Traps, spoons, Pop-R’s, H2O walking lures, and T-Rigs.    We only had one bite and it came on a T-Rig.   This bite produced a 15 inch fish. 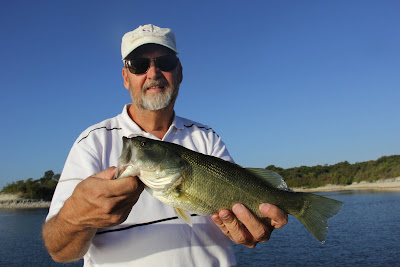 Not much to look at, but some is better than none.

Actually, it was once in a blue moon day….  kind of a rough one and I am happy they only happen once in a while.   I broke my favorite Allstar worm rod….  Not happy about that at all.. have had it for many years.  It was a short handle, the old fashioned kind.   I haven’t seen one like it lately.

Next, the trolling motor went out again… this is my “reserve” motor which is really the motor that came on the boat, but had been rebuilt several years ago after it went out due to leaking water into the motor.  Same thing happened again today.   Now I am back to the new one I bought several years ago, but it also leaked earlier this year and had to have the lower unit replaced (as did the other one).   Well, now I am back to putting the second motor back on.  It is the first time I have used it since I had it repaired.  The bad thing about the motor that broke today was that it cost me about $600 to have it fixed last time and then I only got two to three months use out of it…..  pretty frustrating.   I will swap them out again and take the broke one over to Boris Marine …. likely will not be cheap.   I just hope the one I am putting back on holds up for several years this time.  It was about 9:30 when we left the lake.  Soooooo, glad these days only come around “once in a Blue Moon!

The lake was beautiful this morning… and we pretty much had it to ourselves.  There was no one else using the McCown ramp and we saw no one on the Cedron Creek ramp.   We only saw one boat on the lake; someone trolling for whites I would guess.   Anyway, the parks looked pretty empty for the Labor Day Holiday.  We saw deer and turkey in the park.  The boss got this photo of a turkey. 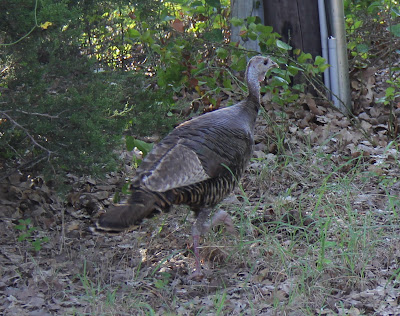 Get out there and enjoy the lake and the scenery!