Any day we catch fish on Whitney is a good day….   we caught a couple today.

We launched around 7:15 a.m. this morning.  The air temperature was 70°, the winds were 5 to 6 mph from the south, southwest, very fish-able if you fished the south shore.   There were few clouds and lots of sunshine.  The water temperature was 77° to 78°, and reasonably clear on the south shorelines…  waves on the northern shorelines caused the water to be a bit muddy.   The lake level is 525.54 or about 7  1/2 feet down… dropping like someone pulled the plug from the bathtub.   The lake has dropped about 6 inches since we were down last Thursday.

We were the first rig on the ramp at McCown this morning and we didn’t see another boat until about 7:30 and that boat came out of the Juniper Cove Marina.   There was also one other rig on the McCown Valley ramp when we got back about 11:00.

We fished top water, crank baits and T-rigs.   We didn’t get any hits on the top water or crank baits.   We picked up two small fish on the T-rigs, but they didn’t bite at all until after 8:30.   We fished mostly around the mouth of Juniper Cove, but then went on up the lake and fished some on the west side of the lake. 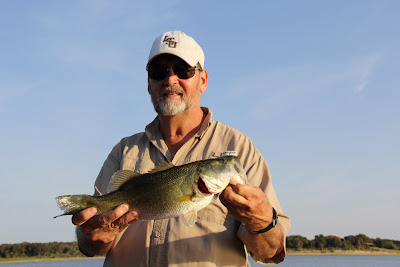 While we only had two fish this morning, we have been picking up two to four fish every time we have gone lately and that is a good sign.  All the fish have been fat and fiesty.   We also saw acres of bait fish on the east side and out in the middle of the lake this morning and there were a few birds working them.   Actually, the bait fish were working on top of the water from the Katy Bridge up to the mouth of Juniper Cove….  that is a lot of water.

We have heard from two other guys that they are also catching fish.  One fella picked up 5 over the weekend down near Harbor Master Marina and another persistent Whitney fisherman has been catching fish in the stickups in shallow areas on the south end of the main lake.  We fished down on the lower end last week, but we didn’t do any good.

We also heard that some fish were being caught up in the Nolan, near Nolan River Park.  We have never been to this park by a land route, but did see it years ago when we were fishing the Nolan coming in by boat from the Brazos and Whitney.  We used to put in a lot at Kimball Bend park and go down to the Nolan to fish, but it has been more than 10 years since we did that….   We have just got used to fishing the mid-lake area.   It is likely that we are missing out on a lot of great fishing on the upper end of the lake.

While we haven’t caught any numbers of fish, and we haven’t caught any big fish, but we are catching fish.  I think the fishing is coming back on Whitney.   If you read back through my reports, you will see that we made lots of trips to Whitney back in the summer and didn’t catch anything on trip after trip.   We have caught fish for at least the last 4 trips in a row…..

If you like to camp and fish, this is the month.  The parks on Whitney are almost empty, but the nights are cool, the days are relatively cool and the fishing is getting better.