Yep, we were fishing Whitney in the wind today… and the winds got up pretty high by around 10 or 11 a.m.

We took our time making the trip down to Whitney this morning….   I wanted to try something that I had heard Randy Routh, Team Redneck Guide Service, mention on the radio Sunday morning on the Brian Hughes Fishing program.   He had said that it was too windy on Sunday for him to fish, but that if a person really wanted to go, they could put in at Uncle Gus’s Marina and fish Rocky Creek and stay out of the wind.  Well, Rocky creek does have high bluff walls on the south side of it… I would guess 50 or 60 feet high in places….  well maybe.    Anyway, it has been and is supposed to be windy all week long and actually today was the least windy of the forecasts.   It cost us $5 to launch, but considering that we got some “sheltered” fishing water, it was worth the price today.

This morning the temperature was in the low 70s.  The lake is 8 feet 4 1/2 inches low….  at 524.62 feet.   The water temperature was 71° or so and the water was much more clear than it has been in the mid-lake area.   Winds started out around 10 mph and jumped up to 15 mph pretty quickly.   We could feel them, but it really didn’t start pushing the boat around until 10 a.m when I am sure they had got up to 15 to 20 mph, but it still wasn’t too bad on the lee side of Rocky Creek.  It was mostly cloudy this morning, and very comfortable fishing.  I tried out a new Magellan fishing suit I picked up on “Clearance” at Academy for next to nothing.   It was thin and the shirt short sleeved and I was very comfortable.

We fished some in the marina area and I think we picked up 3 fish down there…  we had cranked the big motor to idle away from the ramps which were a little steeper than the Corps ramps, but they were fine.

The fish we caught were all small, but they were all keepers, in the 14 to 16 inch range.  Here are some samples. 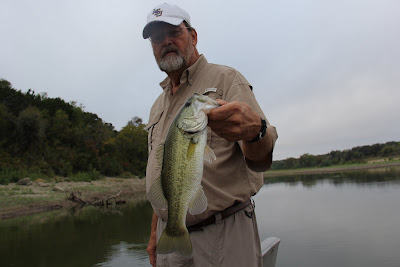 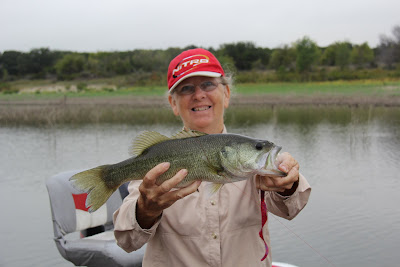 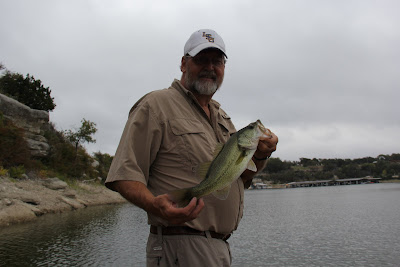 We caught a total of 5 fish.  I caught two on a Rebel that I have had for at least 30 or 40 years.  Just dug it out of the tackle box and decided to throw it this morning…  worked well, I lost one other fish with it.  The Boss caught her three on the usual Old Monster 10 1/2 inch Plum worms…  Her Pop-R didn’t produce anything today even though she about wore the paint off of it early on when I was catching my fish.

Randy was right on this one….  we were able to fish on a windy day and we were able to do so without getting out in the rough water.   One other guy had launched before we got there at 8:30 a.m. and he was gone before we left about 11:30 a.m.

We used to live in Austin and fished Lake Travis quite a bit.  It had a number of these creeks that were essentially canyons cut into the limestone.  Whitney has two or three, but nothing like Travis.   But, a guy can certainly get on the water and fish Whitney even when its “windy.”

There were no issues with the ramp or low water in Uncle Gus’s marina area.      And there are some really scenic spots to fish… check these out: 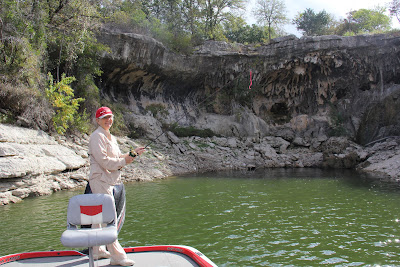 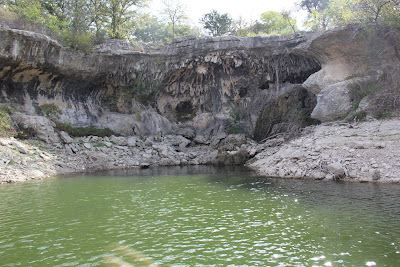 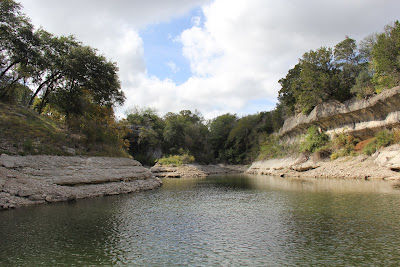 The five fish we caught were relatively small, but hey, they were 5 keepers… and I let at least one more get off….  Who can complain about that?

So, if the winds are up and you are tired of being shut up in the house… just drag that bass rig down to Uncle Gus’s and donate $5 to the cause.   If we can catch fish down there, you can probably clean up!  Any day fishing beats a day working or sitting around the house!