It was “one of those days!”

I got up early, but it was cold so we didn’t hurry to get to the lake.   In fact, we didn’t leave the house until a little after 7 a.m.   Hooked up the little red Gimmie and headed to Whitney…. just cruising.

We got down to the railroad crossing at Blum just in time to catch two loooong trains passing one another at the crossing.    We were the first in the line headed south and it didn’t take long for a number of vehicles to stack up behind us, including a big gravel hauler right behind us.   About half way through the trains, the pickup when dead.. just died.   I cranked it back up and it sputtered and grunted for a second or two and died again…..  I couldn’t hear the engine for the trains.  But, I cranked it one more time and was able to pull it off the road onto a gravel road that ran along side the tracks and shut it down.   After the trains and the traffic cleared, I cranked it and headed on toward Blum…  RB’s Auto Repair Shop is right there in downtown Blum.    Fortunately, RB was in and he checked out the trunk…  cranked it, then ran it down the road for a mile and came back… it began dying as he turned back in.   A little more testing and RB came to the conclusion that the fuel pump was gone… not working at all….  the little red Gimmie died right there in front of his shop and refused to move on its on.

We scratched our heads for a while and ruminated about our options.   Finally, we decided that we were half way to the lake and it was a great day to be fishing.  The Boss called the Number 1 son and in about an hour he showed up and took her back to home base.   She collected the Yukon and headed back down.   In the mean time, I took a nap in the bed of the pickup in front of RB’s.   We had his front doors totally blocked.   When the Boss returned, we pushed the pickup out of the way and hooked up the Yukon.   We came to terms on the pickup with RB and we helped him push it into his shop.  He is going to get it fixed up by Thursday…..

We went on down to the lake…..   after getting up at 5 a.m.   drinking coffee, reading the paper and taking care of business… then a 45 minute ride to Blum….  waiting on the boy to get down to Blum to pickup The Boss and take her back to Cleburne…..  get the Yukon and come back, hook up the boat and make the rest of the run to McCown, we were able to get on the water by 11:30….   one of the longer trips we have ever made to the lake.

The lake was slick as glass… the winds were 2 mph or less.   The sky was deep blue and cloudless.  The temperature when I got up had been 44° or so… when we got on the lake, the temperature was about 60°.   The water temperature was 71°.    The water was clear to murky depending upon where we were.  The lake level is 524.91, just a little over 8 feet low.   It is not falling as fast as it was.  The ramp at McCown is still in great shape; no issues.

We went to the bridge, dug out the wraps The Boss had fixed up for lunch and ate them while getting the latest from Rush Limbaugh… and in the mean time, dragging a worm around.

The fishing was good the first hour… we picked up 3 fish… two keepers and a short fish..  we had a few other bites, but missed them. 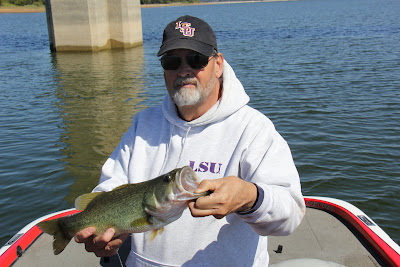 After the first hour, the wind picked up a little, but wasn’t bad.   We tried a couple of other spots where we have been catching fish, but didn’t turn up anything.

Shooowee!   Fishing trips are always adventures.   We considered ourselves very lucky this trip, the pickup quit right in the front door of a mechanic’s shop.  And, though a stranger to us, he turned out to be quite helpful, working our truck into his busy schedule.  And, even with some of “life’s challenges” we were able to get on the lake, catch a few fish and get home safely …  Heck the truck could have died right on the tracks and we could have been a few moments earlier and got to meet both those trains….   We are definitely blessed!

The lake is good… if you get a chance wet a hook come on down….. life is good.

A good story… for Striper fishermen