Yep, it is Wednesday, October 3, 2012.   Life is good.  Whitney bass fishing is improving!   Wouldn’t say it is great yet, but it is much improved over the zero  bite days of this past summer.

We were on the lake this morning at 7:15 a.m.   The air temperature was about 62°, the water temperature was about 70°.   The winds were light all morning, nearly calm early and less than 5 mph up until around 11 a.m. when we came off the lake.  The water is relatively clear. The ramp at McCown is still in good shape, though the fixed boat dock has long been out of the water.  Also, the Corps has not moved the sliding dock in more than a week and it is also not usable for getting in and out of the boat.  According to the Texas Water Development Board’s web site, the lake level at Whitney today was 525.10 or about 7 feet 11 inches low.  The rains Friday and Saturday helped some, but the lake is now lower than it was just before the rains.   This is what the ramp looked like this morning. 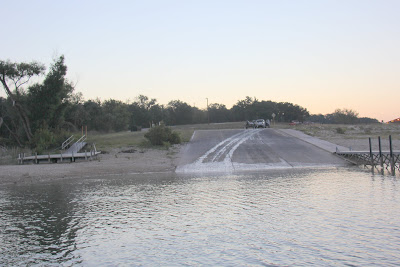 You can access your boat from either the ramp or the sandy beach to the left of the ramp.

It was a cloudless sky this morning, and there was a very slight ripple on the water.  Just right for some top water fishing.   I caught one on a top water and let two others get off of a Pop-R.  The Boss and I also tried some crank baits early but they did not produce.   By 8 a.m.  we had boated 3 or 4 and missed a number of others.  Here are a couple that The Boss and I put into the boat early on. 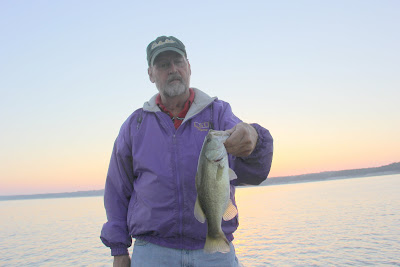 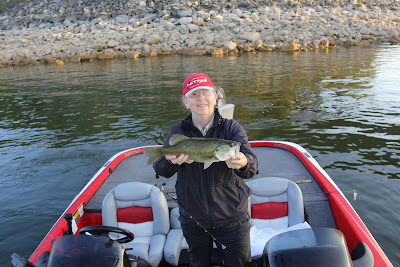 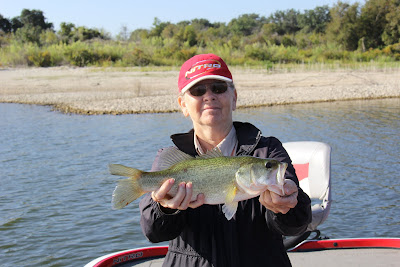 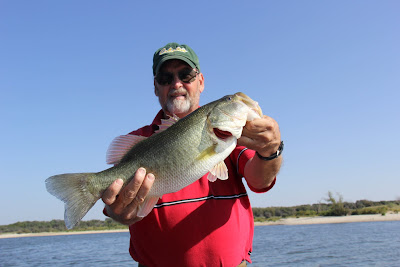 We had a pretty good day.  We boated 8 fish, mostly on T-Rigs, and a couple on Pop-Rs.  We haven’t found the big boys and girls yet, but we are catching fish.  Eventually we will get on the big ones.

Today, we didn’t see the vast schools of bait fish on the surface like we had been seeing the last couple of weeks.   And while we saw some blue herons working, we did not see the number of birds working that we have on the last several trips to the lake.   To tell you the truth, it has been so long since we have caught a 5 plus on Whitney, I think we have forgot what one would feel like.  I know that I was really excited to wrestle with the 4 pounder this morning…  For me, it may as well have weighed 10 plus… I was sweating it getting off.

There were two rigs at the ramp this morning when we launched.  One had already disappeared and the other was behind us launching his boat.  On the lake, we only saw two boats fishing in the McCown and Cedron Creek areas.  There were a couple of other rigs on the ramp when we returned around 11 a.m. , the temperature then had rose to about 77 or 78 degrees….  a very comfortable day on the lake.

October 1, some of the controlled access (manned) Corps parks closed for winter.   McCown looked to be fairly empty, maybe two or three campers were visible from the lake.  The weather is great and the fishing is picking up…..   If you want to experience some great outdoors, now is the time.  The deer herds are covering McCown park… lots for the kids to ooooh and aaah over.