We went down to Peoria last night… they had some great Texas Opry music at the Community Center there.  A great band that plays there the second Tuesday of every month.  If you like Bob Wills, Hank Williams, and the like you will love this bunch.  The price is great too…  a donation and a contribution to the food…  Man did they have some great deserts…  it was a packed house.   We got down to Peoria a little early so we ran on down to Aquilla and checked the Dairy Hill ramp…. The lake is low, but the ramp is still good.  The boat dock is out of the water.  The Port-a-Potty is gone, but the door is still locked on the restrooms.  I don’t know what the Corps is doing there.  But hey, the tree lines and creek channels are clearly visible now and offer some great fishing.

We also got our pickup back from RB’s Auto in Blum on Tuesday…. he called about 2 p.m. and said it was ready.  We hadn’t expected it until Thursday (tomorrow)….   We certainly appreciate his help, and he was very helpful; a new fuel pump and it was ready to go.

We left the house around 6 a.m. this morning, but again had a little excitement on the way to the lake…. at the first stop sign, the boat trailer came off the hitch….  lots of beating and banging and jerking around… sorta scared the bejesus out of us.  Here we were in the middle of a highly traveled state highway with the boat dragging along behind the truck by the safety chains….   Whooooboy….  I hate getting old.   I guess I didn’t get the hitch down on the ball all the way and it jumped off ….  Drug the boat across the road to a service station and spent a few minutes jacking up the trailer, getting it back up where we could get the wheel of the trailer jack on the ground.   Just lucky again for a couple of old folks.   We got it hooked up and were back on the road pretty quickly… No damage to speak of.

We got to the ramp at McCown Valley  and were on  the water about 7:30 a.m.   It was just getting light.  The air temperature was about 62°.  The sky was partly sunny….   though there had been some fog on the way down to the lake, there was none on the lake. The winds were calm.. non-existent.   The water level was 524.72 according to the TWDB web site.  That is a little over 8 feet 3 inches low.   We better get some good rains soon.   The water generally was clear in the main lake areas.   The water temperature was about 70° to 72° today.  There were no other rigs on the ramp again… this has been the case for our last several trips to McCown.   There were 3 other rigs there when we returned and we did see another bass boat on the lake this morning.

The lake was slick going across to the Cedron Creek area….. except of the ripples caused by hundreds, if not thousands, of small schools of bait fish… very small bait fish (less than 1/2 inch in length). 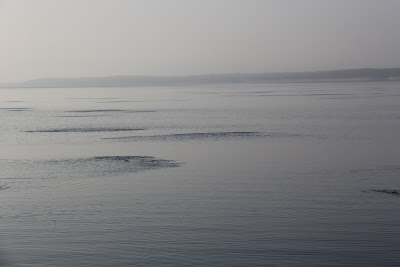 You can wear yourself out casting crank baits and top water lures into these schools…..  no game fish were there in any numbers.   You will see an occasional strike, but they are few and far between relative to the numbers of schools of bait fish. 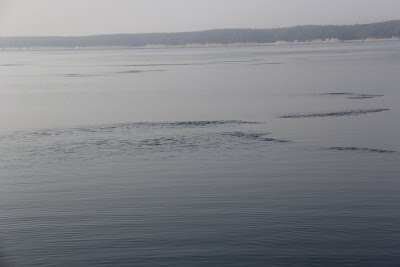 It is both puzzling and interesting.  There should be fishing there.. and maybe there are; we just couldn’t get them to bite.

It was good to get out there and finally get to relax.   I threw some top water while The Boss pitched a worm and a crank bait around….   we weren’t working to hard. 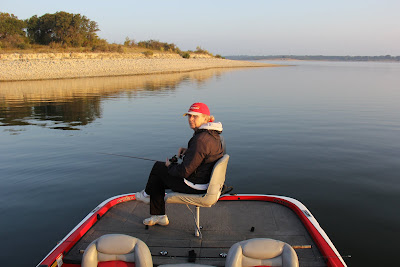 Actually, we just wanted to have a cup of coffee and let our nerves settle from the trailer episode.

I missed two fish on a Pop-R and The Boss threw her stuff down and rigged up a Pop-R.   She put a 2 1/2 pounder in the boat pretty quick.   It was a nice fish, a couple of pounds, but she didn’t wait around for any pictures before she went back to pitching the Pop-R.   The next thing I knew she was boating one on a worm….   I hate it when she changes lures and doesn’t tell me. 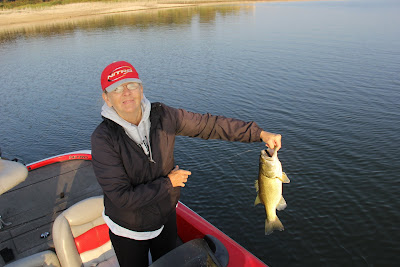 Finally I got one in the boat and we had 3 nice keepers. 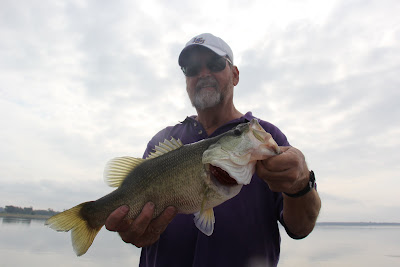 At least mine was a little over 3 pounds… I had the biggest.   I caught another one and we were tied for a while. 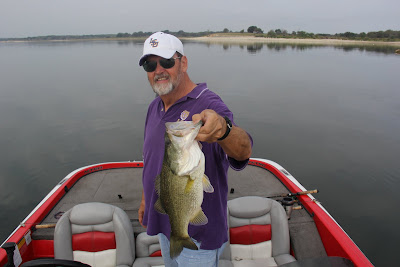 Finally, The Boss boated a 3 pound 10 oz fish.  It put up a pretty good fight and she was having a fit because she had just discovered a nick in her line about 10 yards or so from the working end….  she was playing that fish easy as she didn’t want it to break off…. It didn’t and she boated another good one.   I guess another way you could put it was that I got it in the net like I was supposed to.  Didn’t need to hear the lecture on messing up the net job. 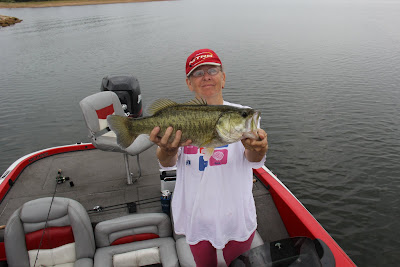 This one had a little different coloring….  I guess they are all unique to a point.

We were off the lake at noon.  The Boss ordered up a hamburger basket from the Pit Stop when we left the ramp and they had it ready when we got there.  It must have been one of those half pound burgers… it was huge and tasted great.

It was another great day on the lake……   Nothing better than The Boss’s cold slaw, jalapeno hush puppies, seasoned French fries and slabs of bass fillets.  Can’t wait til supper.