Well, it is Monday again….   time to get on the lake… the weekend is over…   we can have the lake to ourselves again.

It was cold this morning when we got up at 5 a.m.  It was unusual, but The Boss actually got up before me…..  It was about 40° go 42° this morning when I went down to get the paper… the wind was down.   But it was cool enough that the labs were still in their boxes on the porch and they didn’t bother to get up and make the trip down to the gate with me.   Being as cool as it was, The Boss and I decided that we wouldn’t hurry to get to the lake today.. we would just eat a leisurely breakfast, read some of the paper and then head on down to the lake.

And that is just what we did, arriving at McCown Valley park about 8:30 a.m.   We saw a huge buck between the park gate and the ramp…  beautiful, just did not get a chance to get the camera out and get a shot of it.

The Corps had finally moved the sliding dock down so that it was usable again.  It was actually on the ramp rather than the new concrete ramp on the side.  I think the lake has fallen to the point that the end of that concrete walk way that the dock slides up and down on is nearly out of the water now, so the Corps had moved the dock over to the ramp. 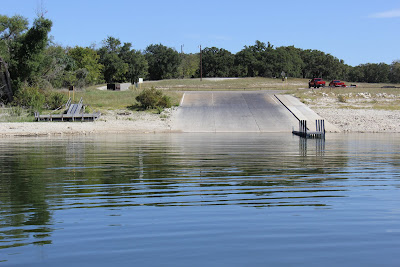 The lake level is 524.59 or about 8 feet 5 inches low.  The air temperature had inched up to about 45 degrees or so.  The water temperature when we launched was about 65°.  By noon it had got back up to around 68°.   The water is relatively clear in the mid-lake area, though not as clear as we found down in Rocky Creek last week.   There were a few scattered clouds and there was a light wind out of the northwest we started across the lake.  We did not see any gulls today, but we did see a few blue herons and an osprey working over near the bridge rip-rap.

Again, we wimped out and didn’t make a long run due to the briskness of the air.  We just eased over to the bridge and fished the rip-rap to begin with.   Before I could get a bite, The Boss had boated two fish and missed two others.  She was actually pretty proud of that fact and was hard to live with there for a while. 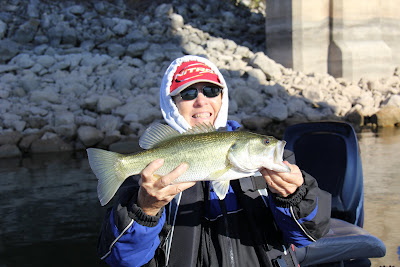 She was working that Old Monster worm around those rocks, picking them out in 6 or 8 feet of water.

I finally picked up a little one on the Rebel that I still had tied on from the last trip when we went to Rocky Creek. 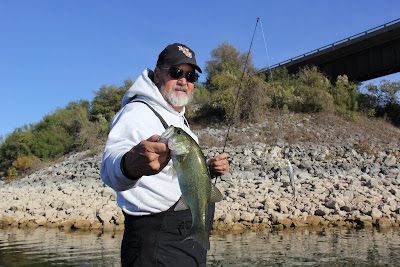 It was little, but I was happy to get it.   The Boss found all her fish in one little sweet spot and I was able to get the Rebel on her spot while she was trying to find another spot….

As it warmed up we decided to move on down the lake to the Cedron Creek area and fish some of our other favorite spots.  And, we found another sweet spot and we picked up another 6 fish there.  I think I ended up with 5 total and The Boss had 4.  I succeeded in keeping her end of the boat away from the good spots until I could catch a few fish. 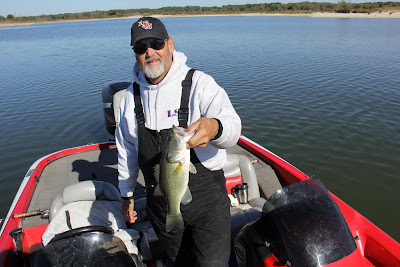 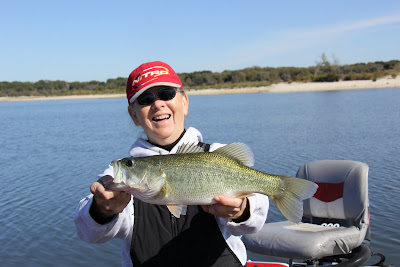 She was still laughing though….  she got to catch the last one.  As you can tell, the wind calmed down to nearly nothing at times the lake was just slick as glass.

I caught the one fish on the Rebel and lost one other on it.   The rest of the fish came on T-Rigs and Old Monster worms.   Only one color was working…. I know, The Boss wore me out until I changed colors. 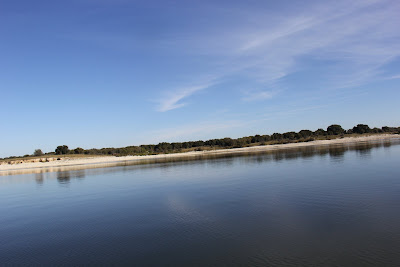 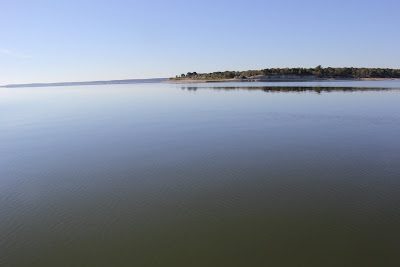 I think a lot of guys who fish tournaments and such really don’t like this kind of weather… that is calm and sky blue skies, but we do.   It is easy fishing for us old, retired folks.   We can sit back and relax and just wait on those tap-taps.

We saw one other boat head up Cedron Creek with a couple of guys in it and we saw them fishing the shallow water in some stumpy flats further up the creek.   They were there after we left.  I figure it this way:  if we caught 9, they were doing pretty well themselves.

We also got to see a  big deer swimming the lake.  We don’t know where it came from, but we spotted it crossing the open water headed toward Cedron Creek Park.  Our camera has a pretty good zoom lens on it and we got a great series of pictures.   Here are just a few of many that we took.  Some of them we cropped so that we could get larger images of the deer. 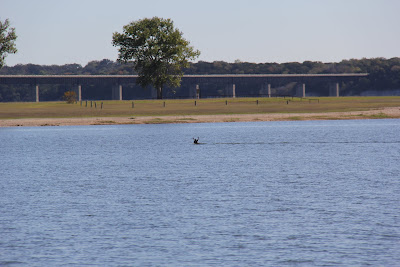 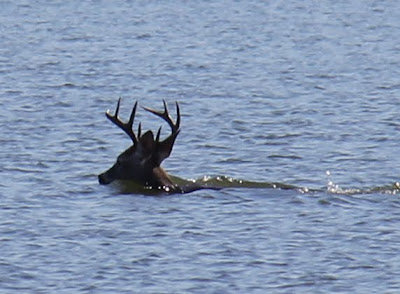 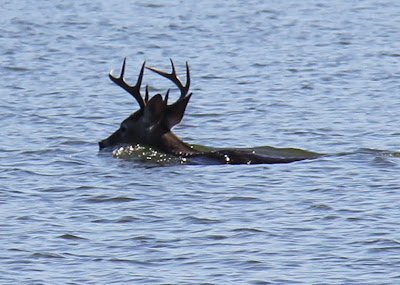 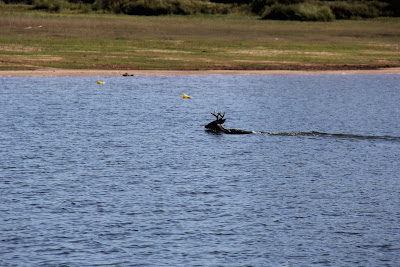 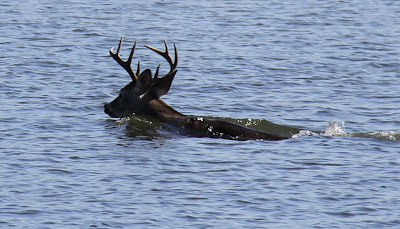 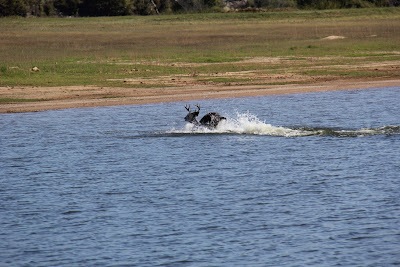 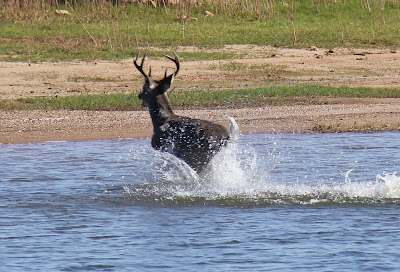 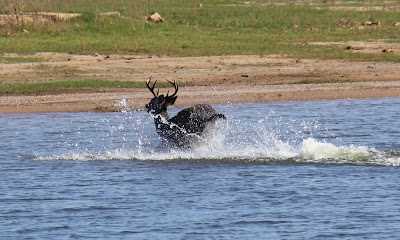 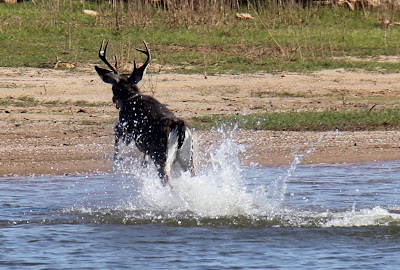 There were a couple of blue herons working along the shore…  the buck routed those fellows. 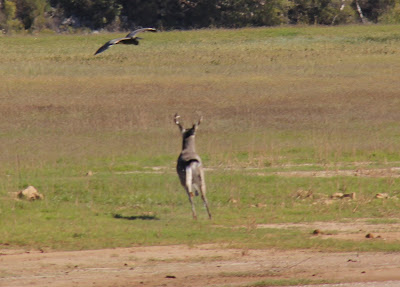 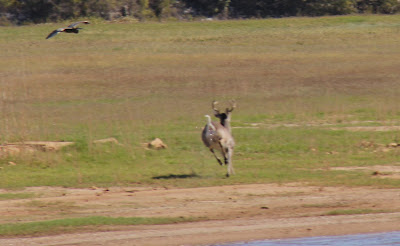 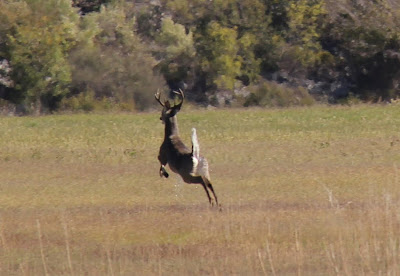 Man, I just love that last shot… he was kicking it into over drive!

It was really thrilling to see this big boy swimming and then break out of the water and hoof it to the woods.   There had been two other rigs on the ramp when we launched.  One of those boats returned while we were loading up when we left.  They were hunters.  I am sure that they would have liked to have either of the big bucks we saw this morning… the one between the ramp and the gate and this big boy who went for a swim this morning.   From what I could see, they had ended up with zip, zero, nadda, nuttin!

We didn’t come off the water until 2 p.m.   That is a long day for us…  but we got to eat Vienna Sausage, crackers and cheese on the lake for lunch…  actually we could have used some sardines as well.  Anyway.  it was fun.

As we came back to ramp, this old geezer was on watch to make sure no one violated the “NO WAKE” zone…. 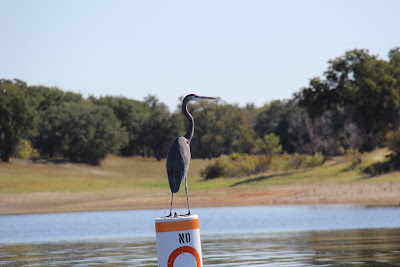 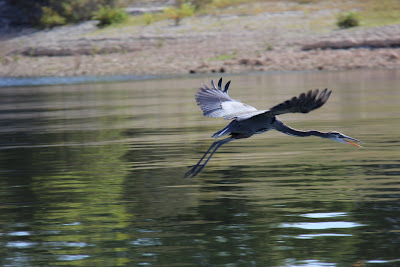 I hope he had as good a day fishing as we did.  It was cool to start with, but not to bad and it warmed up quickly.  We caught 9 keepers and missed another half dozen.   Fishing was great.  The weather was great.  Life is great.   Hard to beat a day like this.

If you have a day off… it is a great time to get on the lake!