Tuesday, yesterday, we had some chores to do around the ranch…. this is the ranch skyline at sun rise…. isn’t it a beauty.  The day started out great and ended great because we went fishing….. 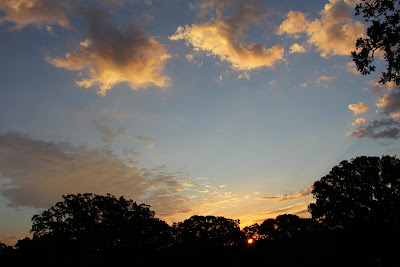 We got our chores done around 11 a.m. Tuesday, and then talked about what a great day it was outside….  the boat and pickup looked like the labs when they are queued up on a bird… .they were ready to go.   So we ate lunch and hooked them to the lake.   We got to the McCown ramp and into the water by about 2 p.m.   The water temperature was up to 70°.  The wind was calm and the air temperature was in the high 70s, though it felt like it was in the mid 80s.   The lake level has been holding “steady” for about 2 weeks now.  It was at 524.53 or 8 feet 6 inches low. 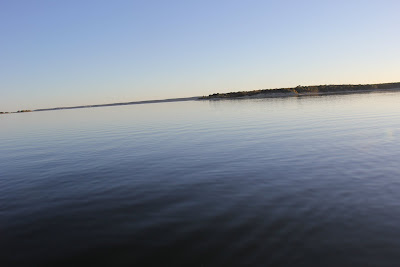 Is that “calm” or what… looks like a fella could walk on it, man it was smooth.   We fished hard from 2 p.m. until about 5 p.m and hardly got a bite.   Then as the sun went down we found a shallow pocket with a few isolated stumps and a creek channel…  we picked up two keepers on top water lures…  I caught mine on a Pop-R and The Boss caught her fish on my old Rebel….she picked it up off the deck when I boated my fish and it only took her a minute to hook up with hers. 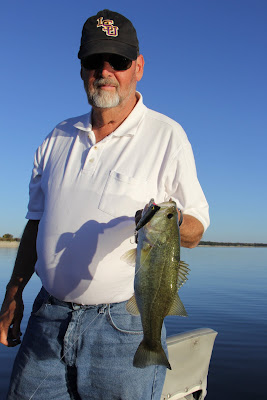 Both fish came from about the same spot at about the same time.  I think they may have come from a small school that were chasing some bait fish in the shallows.  They were the only fish we found all afternoon.   We fished a couple more spots pretty quickly and then headed for the house.  We were off the water by 5:30.   The weather had been great and we caught a couple of keepers…  The day wasn’t all bad.

This morning, Wednesday morning, we were up early.  The Boss fixed me up with a Finnish Pancake…  a very light pancake topped with honey and canned peaches (our own)… Man was it good.   She stuck to her usual sausage biscuit.. those are great too.   Anyway, we headed on back down to McCown Valley.   Another gorgeous day today.  It was cooler this morning… just above 50° and we opted for our cold weather coveralls.   The wild life was out in full force today…   we saw about 50 turkeys in 3 or 4 groups near the ramp, several deer, a blue heron on guard at the ramp and some honkers headed south for the winter.  Here are some shots of some of them. 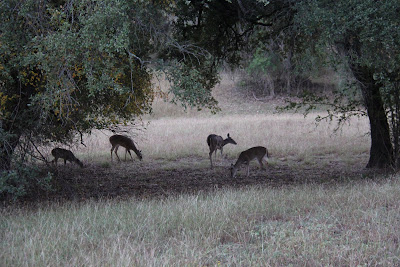 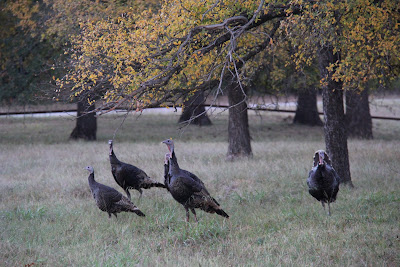 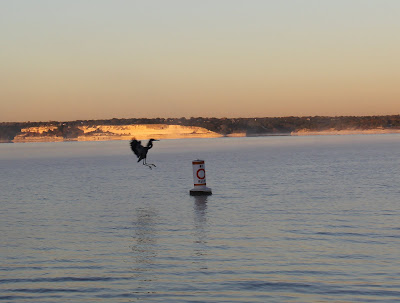 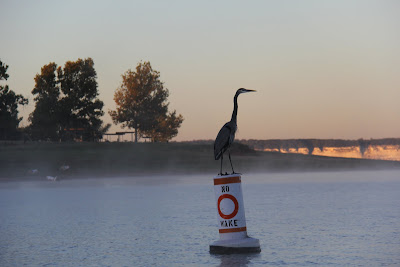 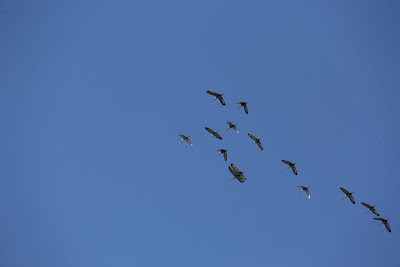 Actually, there were a lot of geese….  what a convention…  they were really whooping it up today…  I don’t know how many flocks we saw of them.

There was no change in the water level today.   And even though the air temperature was just above 50°at 7 a.m., the water temperature remained at 65°.  The water temperature did warm up to near 70° by the time we left noon.  The water clarity is mixed and depends upon the location you are fishing.  In some places you can see several feet down and in other spots, it is somewhat murky.   It was a little windy between 7 and 8 a.m.   The remainder of the day, it was like yesterday afternoon…  calm. 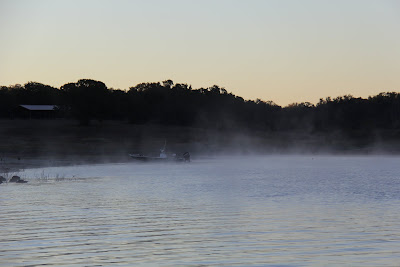 There was a little fog on the water in the backs of some of the coves, but it quickly cleared and we had a bright sunny day on our hands.  This is the cove beside the ramp at McCown Valley.  Someone had a striper boat beached back there… They must have slept in this morning.  After all it was great sleeping weather.  This second picture was taken about 10:30 or so. 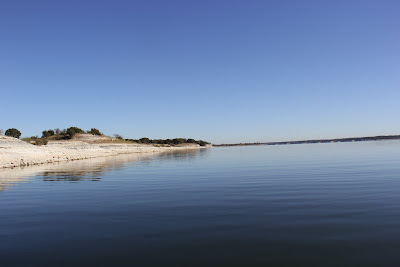 Since it was cool, we didn’t bother to boat very far.   We buggeyed over to the bridge and The Boss quickly picked up two fish.  One went about 2 pounds, the other was a 3.11 pounder on the old fish scales. 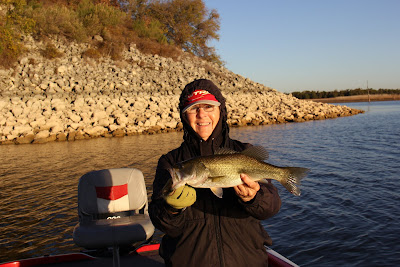 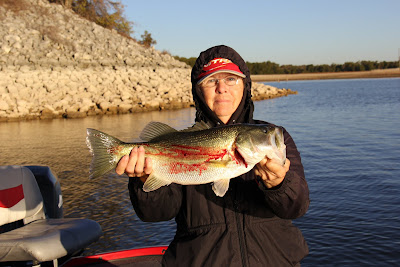 She got them out of the same spot… I think she has a little sweet spot that she hasn’t shared with me.   My back is always turned when I hear “I’m getting a bite!”  She wears that T-Rig out.

She had these two in the boat before 8 a.m.   But we fished for another 3 hours without boating a fish, though we did get some more bites.   The fish were just biting really light today. 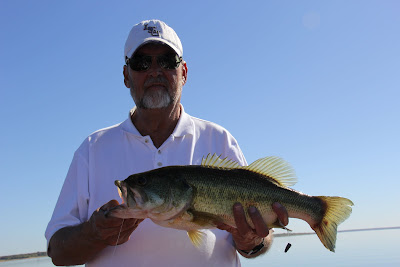 Shortly after I put this one in the boat, I picked up another 3 pounder and again it was in deeper water… 10 to 12 feet.   The Boss got her two early and I got my two late… 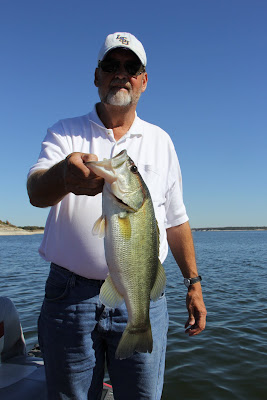 It was “on the rocks” for us today…. all four fish came off the rocks.  Hers both came from the rip-rap at the bridge and mine came on rocky points.  All four fish came on Old Monster Plum worms fished on T-Rigs…. our go to lure on Whitney.  I can’t understand why Academy can’t keep them stocked.

I will say that we are blessed.   We get to go fishing most any time we want and we catch plenty of fish, well most of the time.   We turn most of the fish back, but we also put some in the freezer… nothing better than when The Boss fries up some black bass, french fries, and jalapeno hush puppies and then throws in some of that Louisiana cold slaw….  Now you see how I keep so slim.  We also have a great fishery  and are fortunate enough to have a boat and truck to get us there…..   And in Texas, the majority of the days are like today…. great days to fish.   I ain’t bragging or complaining… just stating the facts.  I also love the fact that when we are on the lake…  we are oblivious to the rest of the world and all of its crazy problems….   Like the skies, our minds are clear.

I think there was only one other bass fisherman out there today..  a couple of white or stripper fishermen and two or three boats with hunters.   Not many folks on the lake….  I guess that is a good thing.   If you get a chance… head on out to the lake… any lake, the fish could be biting.