First time we have been fishing on Whitney on a Saturday in a coon’s age.  Wasn’t too bad.  There might have been a half dozen rigs on the ramp at McCown when we launched, and ten when we gave it up at around 12:00.  And, only two “ships” tried to wash us out of the lake and they were down near Juniper Cove.

It was supposed to be 10 mph or so today, but the lake was relatively calm… I don’t think the wind ever got to 10 mph all morning.  It was also supposed to be cloudy, but it was mostly blue skies.  The air temperature at launch was about 63°, really nice.  The water temperature was about 65° and quickly warmed to 68°.  Actually, the air temperature heated up pretty quickly as well.   We wore light jackets, but had to peel out of them by 9:30 or so.   The water remains relatively clear and it appears to be somewhat stable at 524.53 or about 8 feet 6 inches low.   The ramp at McCown Valley is in good shape with the sliding dock in the water and very usable.   There appeared to be some fog down on the lower end of the lake, but there wasn’t any up around McCown Valley.

We launched at 8:30 a.m., took our time getting there today.  We had expected it to be windy and we had planned to fish up near Cedar Creek and Juniper Cove.   But since the wind was down we made a run to Cedron Creek to a spot where we had been catching a few fish lately.   Our son was with us today and we let him run the trolling motor and have the first casts this morning.  And, he picked up a short fish in just a few minutes.  And missed several others. 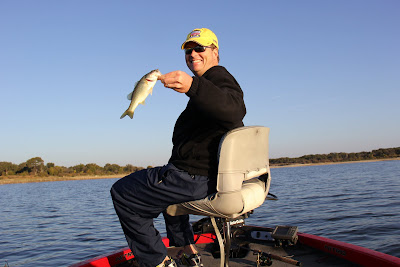 I am telling you…  You buy them rods and reels, take em fishing, put them on your best holes and this is all they come up with…   what can a Dad say?

We all missed several fish here… Joe  figured out his problem…  drag set too loose…  couldn’t get good hook sets…  but discovered too late.  The Boss and I couldn’t understand our problems… we were just missing fish.  I had two just take my worms and I broke off one hook on the set.  Very, very frustrating.

We wore the  first spot out and the fish turned off so we made the trip up the lake to Juniper Cove and Point 7.  Again we got some bites, but didn’t pick up any fish right off.

Finally, I got a nice strike on my old faithful Rebel and our son got a bunch of pretty good photos. 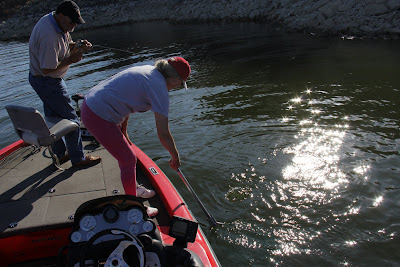 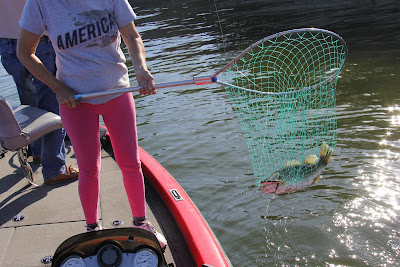 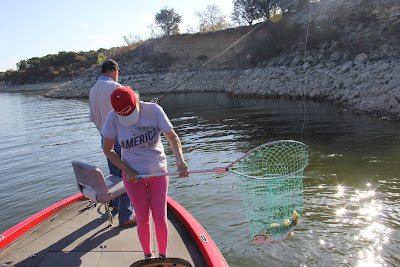 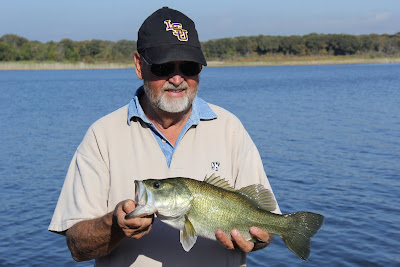 We poked around Juniper Cove some more but didn’t turn up any more there so we moved across the creek where we found a couple of more keepers.

This one The Boss caught must have smelled or something… I couldn’t understand her pose for this photo. 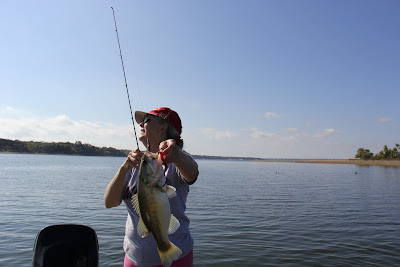 Luckily we got a little better photo.  How about those smiling faces. 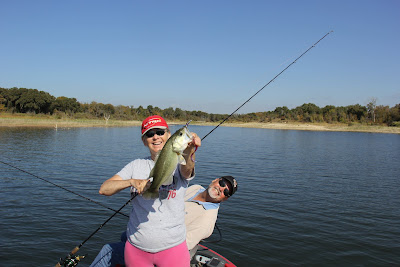 It was a decent fish.   I threw into the spot where she picked it up and immediately picked up one for myself. 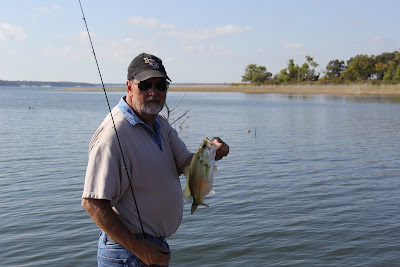 All in all, we had a fun day on the lake….  I had two and The Boss and Joe had one apiece… so a total of 4 fish.   We missed a large number of others.  I couldn’t figure out why we missed so many fish… just terrible.   We should have had 8 or 10 fish.