Of course The Boss had all the luck… I had none…. zero… nadda… zip…  If I did anything right, it was to be the guide and the best dipper-upper…..

I had read the latest Bass Master magazine yesterday and was determined to start out with a jerk bait or a square-billed crank bait and that is what I did….   The Boss started with a Rattle Trap….  but I don’t think she tossed it more than a couple of times before she picked up her worm rod….   TWO CASTS… that’s all it took… “I’m getting a bite” she yelled as I was starting to troll to a new spot….  Quickly I  eased off the trolling motor as she jumped up and gave the fish some slack…  Then the classic hook set and the fight was on… we had been on the water less than 5 minutes….  The big fish (4-8)  jumped and it was “GET THE NET”….   It took a few minutes… it was a feisty one….  but, I eventually dipped it up before she tried to toss it in the boat….. 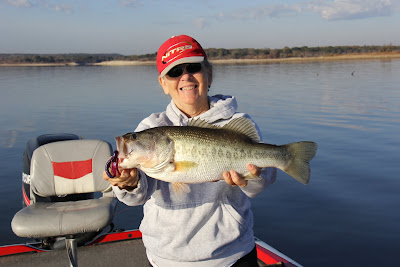 It was a 4 and a half pounder….  I knew I was in for a bad day…..  well not really, I thought, “Hey, maybe they are going to bite big today!”…. It was 8:30 a.m.  Within a few minutes, she boated her second keeper… a 2 pounder.   She didn’t want to take the time to let me take another picture…. she pulled that hook out, tossed it back in the water and went back to fishing….

But, we didn’t turn up any more at that location so we moved on… and then in the next spot, she boated this one. I was 3 down.  Then at the next location she caught this one and after a quick picture…  she was quickly back to work… 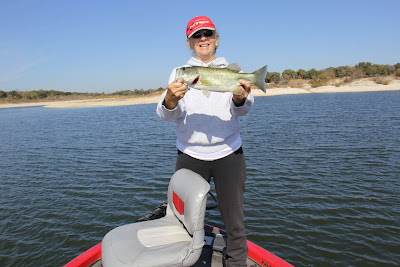 I was 4 down and maybe, just maybe had had two bites…. and those were real maybe’s.

By that time it was getting to be 11 a.m.   We were shedding clothes… it was down right warm by then.  We headed on down the lake for a little rocky point fishing in some deeper water.  I started out in 15 feet of water….  The Boss tossed that Zoom Old Monster up in the shallow water right on the point…. It was that same old routine… “I’m getting a bite” she screamed as I was trolling away….   She set the hook on it…. and exclaimed that there was too much slack in the line… and she kept setting the hook as the fish ran and danced around the boat….  I went from one side to the other trying to get into position to dip it up… mean while this old gal was doing its best “dancing with the stars” routine … in and out of the water it went….

Again, it took a few minutes, but I saved my marriage by getting the fish into the net…. 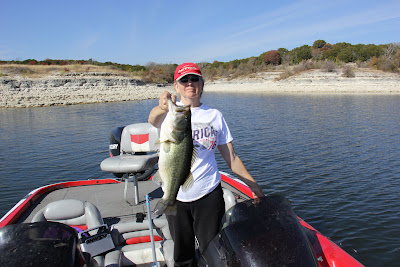 We double checked the weight on this fish… two different scales, but virtually the same weight on both.  But boy, did that fish look big and feel big in the net!  I just could not believe it only weighed 5-10.

All in all, it was a great day… The Boss boated 5 keepers….  and she was one happy camper.

The condition information for the day was:  The air temp at launch was somewhere around 55 to 60 degrees and virtually no wind.  There were supposed to be clouds and or fog, but there were none….. It was very sunny.  The water was slightly stained for the most part, not as clear as it has been.  The water temperature started out at 62° and by lunch had warmed to 65°.  The lake level is 524.35, a little over 8 and half feet down.  McCown Valley ramp is in great shape and the sliding dock is fully functional and they even mowed for the Thanksgiving weekend campers.   The lake has been relatively stable for about 3 weeks now and I think this has helped the bass fishing.  There was two boats already on the lake when we got there, and we saw three others as the day wore on.  I don’t think we saw anyone else bass fishing….

Did I mention it was calm this morning….  and warm! 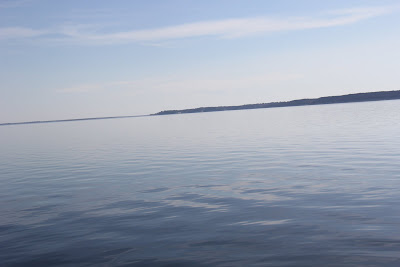 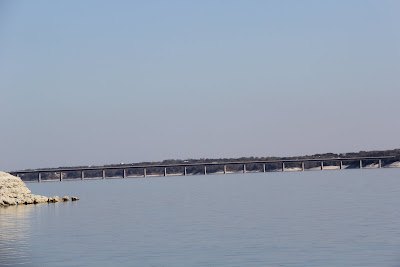 I can tell you that by 8:30, we were smearing on the sun screen…  It was just blistering out there, no clouds and no wind.

We had a fun day… a good trip… no mechanical problems and no issues on the road.  Life is GOOD!  And I guess it will get better.  The Boss says she is not going to charge me for the fishing lessons today since I did such a fine job guiding and handling the net.