Again and again….  The Boss never lets up.

We were up late last night, went and heard some great western swing and country music down to Hillsboro.  We caught the weather on the 10 p.m. news when we got home.  It was supposed to be 10 to 15 mph winds today….   Man, I want to come back as a weatherman in my next life….  wrong a lot of the time, yet still get paid big bucks to be on TV… what a deal.

Anyway, I didn’t get up until 6 a.m. this morning… versus the normal 5 a.m.  And, I didn’t even check the weather.  I did go down and get the paper and visit with the pups for a while, but really didn’t pay attention to the weather other than to note it wasn’t too windy.    I made the coffee and drank a couple of cups while I tried to find some good news in the news paper….  boy, that will put a fella in a grumpy mood right off….  reading the paper that is.   Anyway, about 10 minutes after 7 a.m., The Boss gets up and comes and says “Are we fishing or what?”  I said “It is supposed to be windy today.”   She advised that it wasn’t windy at the moment….  the wind chimes outside were silent…  I thought maybe they had blown down or something.  But She headed to the door and right on outside….  “Its calm out here!”

So, I obediently jumped up and started gathering up stuff to go to the lake.    We didn’t get down to McCown Valley until 9 a.m.; it takes a while to make sausage biscuits and such.

We had packed our winter gear.. those clearance Polar Ice Ski suits from Academy, had stuffed them behind the pickup seat along with the ice chest and the lunch bucket….  But, when we got to the ramp, it was clear that we  likely didn’t need them.. the folks at WBAP advised that the temperature was 55° outside and it was every bit of that.  But, you never know so we put ’em on anyway.  By the time we got across the lake, we were taking them back off…. It was really nice out there.  And, the TV weather people had missed again… they are worse than the Cowboys.   There was no wind when we started fishing.  The lake looked like a mirror.

The water temperature when we got there was 61°.   It was a little cloudy, but not much.  To the south, we could see a big front of some variety headed our way, but it proved to be slow moving and wasn’t a factor in the fishing.  We fished the Bee Bluffs this morning because we had read in the Bass Times that in the winter, the bass liked steep bluffs and moved up and down in the water along the bluffs.. supposedly so they could get to their desired temperature.  Well, today, they must have found some AC and heating somewhere else…  We fished the bluffs (especially the rock slides) and some rocky points and some shallow coves…  I got one bite.  I don’t think The Boss got a tap.  She did get a great picture along the bluffs. 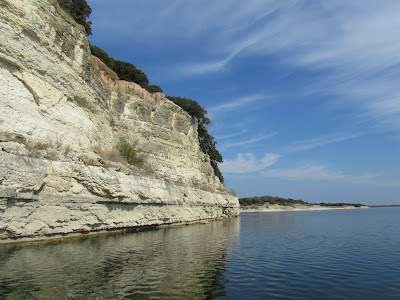 I liked it anyway….

We worked the bluffs hard for 2 to 2 1/2 hours….   just did not produce.  So we cranked up and went around to Cedron Creek.   It was still calm when we got there.   We have a couple of favorite spots, but The Boss suggested that we start in some deeper water today.   I think her first or second cast got her hooked up with this 4 pound 6 oz, good old biggern. 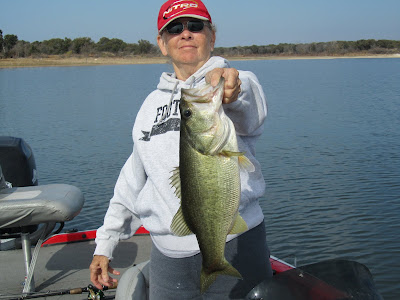 I just hate it when she does that.   It was a spunky one and it ran around the boat a couple of times… while I was getting the net out per the instructions.   I was down behind the console in the driver’s seat ready to dip it up when it lunged beneath the net … I jerked the net up and right into a jerk bait The Boss had laying behind the seat….  I got lots of instructions immediately… but, I patiently removed all 3 sets of hooks from the net and got ready again… Actually, I don’t think the fish was ready when I had the net in the water the first time….  However, when it passed by this time I was able to dip it up… Thankfully.  You can see for yourself that The Boss managed a half smile with this one.

We worked that spot over good from a number of angles with crank baits and T-rigs, but we didn’t get another fish in the boat.  I think we had two or three more bites there, but missed them.

We took a break for lunch.  Listened to some Rush Limbaugh and ate some ham and cheese wraps….  Gotta thank old Randy Brewer for recommending the wraps as a lunch…  quick and easy.  I could probably even make them in a pinch.

After lunch, The Boss was back tying to wear out those Zoom worms…  wasn’t long before she boated another one… a 16 incher.  When she set the hook, it came out of the water and nearly landed in the boat….   I think maybe two cups of coffee was a little too much this morning. 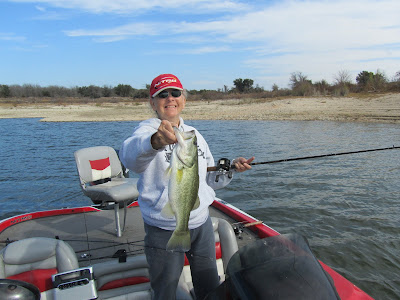 As you can see, she had begun to lighten up a little bit.. this one drew a little bigger smile.  Also you can see that the wind had started to pickup.  We fished that hole a bit longer with no more results.  We moved again, but it did no good.  Also, the front was almost on us and the main lake was beginning to white cap.  It was 1 p.m. and we had put in 4 hours… not productive for me, but The Boss really enjoyed it.  I was kinda glad that we didn’t fish the Katy Bridge rip-rap…. she would have likely picked up a couple more.

The lake level today was 524.17 or about 8 feet 10 inches low.  The ramp at McCown Valley continues to be in great shape and the sliding dock is well positioned.  The water where we fished today was mostly clear… better than it was on Wednesday.  There was one other rig on the ramp when we launched and we only saw a couple more boats.  We essentially had the lake to ourselves and could have fished anywhere we wanted without being bothered.  I think we had boat waves one time when a hunter went back up in a creek we were fishing.

We did see a nice bunch of turkeys when we got to the lake… only one deer this morning.  The turkeys weren’t shy at all and pretty much ignored us.

This is a parting shot of them.. they had been even a little closer. 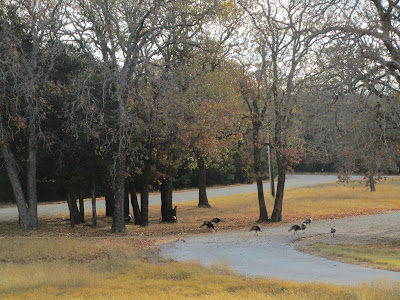 Life is good…. no issues on the trip…  put the fish back…  and got a nap on the way home while The Boss drove.  A great day on the lake and a great day to be alive.  We are blessed.  Just too bad I was whupped again.