We made our first trip of the year to Whitney today…  actually, the first trip in several weeks.   We just haven’t been.  No excuses.  And we like to fish Whitney in the winter.  One thing for sure, when you miss a week or two, the fish move and it is a whole new ball game or a new game of hide and seek.

The lake level is 523.98… essentially 9 feet low.  The ramp at McCown Valley Park is still in good shape, though there is a lot of sand and gravel on the ramp.  We stayed in the middle lane as the sand and gravel was deeper along the sides of the ramp. 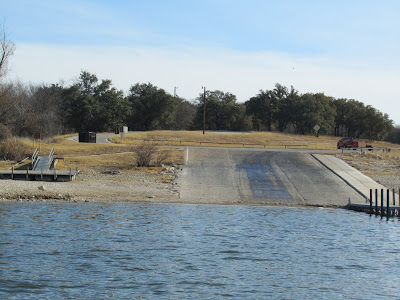 As you can see, the fixed dock is well out of the water, but the Corps has the sliding dock in a workable position, in the third lane.

We didn’t launch until 10:30 a.m. this morning.  It was 31° when I got up at 5 a.m. and checked the weather.  With it being that cold, I just decided to read the paper and drink my coffee.    Just take it easy.   After my sausage biscuit and coffee, I went out and double checked the boat and trailer… it had been so long since we had gone fishing that I couldn’t remember what the status might be.   I shot some grease into the wheel bearings just to make sure that they were in good shape, and jacked up each wheel to give them a spin and make sure there wasn’t too much wobble in the wheels…  Seemed like everything was good to go.

The air temperature was about 43° or 44° when we launched and the wind was about 6 to 8 miles per hour from the north west.  The weather report had said the wind was going to be out of the south, southwest, but that is always a question.  It was also supposed to be lots of sunshine, but it turned out to be mostly cloudy.  The water temperature all day was a steady 48° and was stained at best.

We fished several of our normal spots, starting at the bridge rip-rap first.   We didn’t get a bite at any of our normal spots.  After trying a couple of spots up in Cedron Creek and up around Bee Bluffs, we headed back up the lake.  We marked lots of bait fish and fish hanging in and around them in the river channel, especially on the ledges and drop-offs.  Since we had given the black bass a reasonable shot, actually a number of shots, we decided to try the whites and stripers with the slabs.

The Boss picked up two and I boated one. 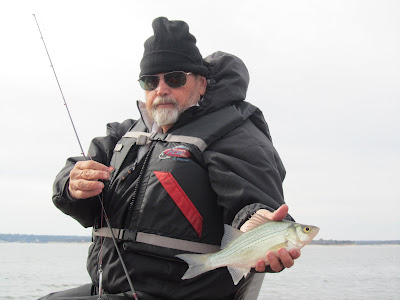 Mine was smaller, The Boss had a couple of nice ones, I was just too lazy to get down and take her picture.  The whites were biting slow and we only gave them about 30 minutes.   We weren’t going to take any fish home anyway.

All I can tell you is that we did not mark any bass in the spots where we should have.  We got no bites on crank baits, jigs, or C-Rigs.  The Boss lost one Bass on a T-Rig at the bridge rip-rap.

We only saw one other boat on the lake and it was a hunter.  I think they brought a hog back to the ramp.  At least there was one on a dolly laying on their boat trailer at the ramp. 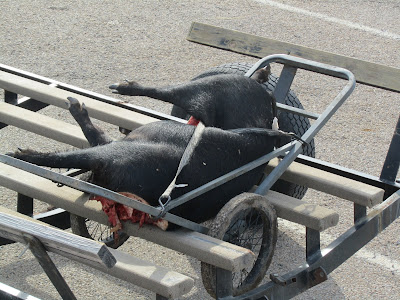 These boys had some bacon and ham on the hoof.

We had a good day… easy trip down there and back.  Actually, you haven’t heard me talk about the roads down from Cleburne lately.  That’s because the roads are in great shape; they have been for about a year now.   I am afraid to say anything actually, because just as soon as you do, some jurisdiction will decide to do some construction work.

Anyway, we fished 4 hours, from 10:30 a.m. until 2:30 a.m.   We had one black bass bite and caught 3 average white bass.   The down side is that since we hadn’t gone in a while, we didn’t know where the fish are…  We can say that they are not on the point and ledges where we normally find them this time of year.   We can tell you that we marked a lot of bait fish and fish in the river and creek channels, mostly from 30 to  40 feet deep.  When we worked these with a slab, they turned out to be whites, or at least that was all we caught.  Those bites were very light.  We had watched old Bill Wilcox on Honey Hole Saturday morning.  He had caught a number of bass on crank baits on the dam rip-rap at Eagle Mountain Lake, I think.  We figured to duplicate that today on the bridge rip-rap.. that turned out to be a pipe dream… just didn’t happen.  There were no fish there according to our liars (fish-finders).

The biggest achievement of the day was getting our Annual Corps Day Use Pass renewed.  Fifteen bucks and we are good to go every day we want to fish for the next year.  That Senior Pass really pays off.  At the end of the day, you just can’t beat $15 a year to use any Corp park boat ramp as many times as you want for the next year.

The Boss was happy though.. going fishing always puts a big smile on her face.