Got up a little late this morning….  around 7 a.m. versus the normal 5:30 a.m.   We went out to a blue grass music event just out of Whitney last night and didn’t get home until late… Anyway it was pretty cool…  33 or 34 when we got up… too cool to rush out and get on the lake.

We took our time getting down to the lake.   We arrived at McCown about 10:15.  The air temperature was about 46°.   The water temperature when we launched was 48° and stayed there.   The water was stained to murky for the most part though we did find some clear water in the back of a couple of coves.  The lake level is 524.46 or about 8 1/2 feet low.  The ramp at McCown is in good shape, though there is some small gravel on the outside ramps.  The winds were relatively light when we launched… I would guess they were 5 to 8 mph, but it picked up as the day went on.  The skies were cloudless… an “uncloudy day” as Willie would say.   Actually, it was a great day to be on the lake.

We fished all our normal spots starting with the bridge rip-rap.   We didn’t get a bite all day.   We fished crank baits, jerk baits, T-rigs and C-rigs.  Just nothing where we fished.   We did mark some fish in the river channel at about 25 to 30 feet and we saw some in the very back of a cove in 2 to 3 feet of water, though we have no idea what kind of fish they were…. They could have been bass, carp, drum or cat…. who knows.  But, they were there and moving along the edge of the shore.  They had no interest in the lures we threw at them and, in fact, left in a hurry as we attempted to get them to bite.

We did get to visit with this lady who was fishing from shore. 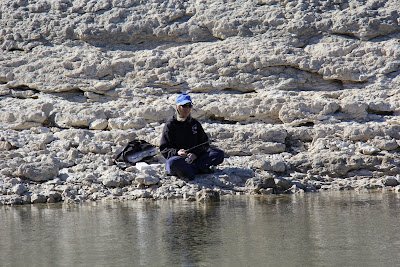 We visited with her for a bit…. She advised that we had just missed seeing her land a large drum.   She also said that she had been catching some carp as well….   I was impressed.  Personally, I don’t know the difference between a drum and a carp.   She also said that 3 weeks ago she had caught a 15 pound plus striper.     She said that she and her husband also fished from a boat, but when doing that they normally went to Lofer’s Bend and put in because they caught a lot more fish on the lower end of the lake than in the mid-lake, McCown area.  They normally fish for stripers down there.  She gave us a great fishing report…

We had a great day fishing though.  The air temperature got to around 60° by the time we came off the water at 2:30 this afternoon.  Very nice.

But, then the adventure began.    I went and got the truck and trailer and backed it down in the lake.   I had to get off to one side as there were some other guys launching, I don’t know if they were hunting, fishing, or just boat riding.  You make a guess. 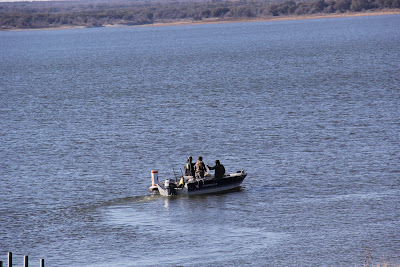 In the mean time, The Boss began to shout at me from the boat that there was a problem.  I pulled on to the top of the ramp and then traded places with her.  She had reported a “grinding noise” and there was one big time… In fact, metal shavings were trailing behind the right side of the boat trailer.   We got it on up to the parking lot and out of the road.  I got the jack out and began to pull of the wheel from the rear axle where the shaving were apparently coming from….   Much to my surprise, the wheel would not come off…  It took some doing, but I finally got it off and the problem was quickly apparent.   The primary spring leaf had broke in the middle… right where the bolt goes through it.   The broken spring leaf had wedged itself into the inside of the aluminum wheel.  It has “machined” a 3/8 inch grove along the inside of the wheel and done it as neatly as if it had been on a lathe.

Here are a few pictures of the trailer and spring. 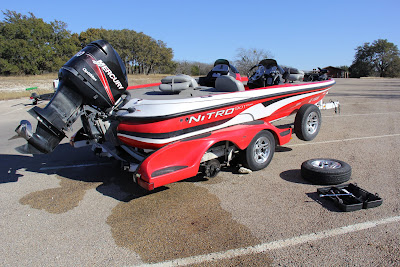 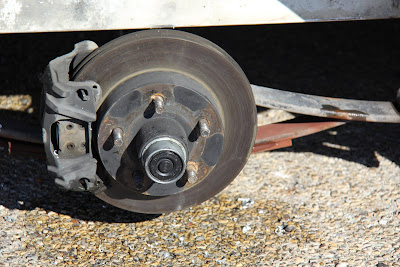 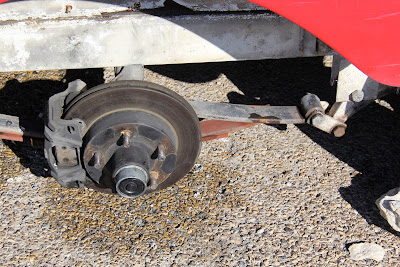 I guess you are getting the picture… it was broke.

We unhooked the trailer (always block the wheels when unhooking… we didn’t but fortunately, the trailer didn’t go too far before we got the wheels blocked.   I figured out the issue and ran up to the service station just outside the park.  While they had a mechanic there, they said they couldn’t help me with a repair… but they did give me the number of Speedway Towing.   Back down to the ramp and a discussion of the options with The Boss….  some more folks had come and gone, but there was not much anyone could do.  We called Speedway and Uncle Gus’s Marina.   Speedway said they were sending a flatbed truck that could haul the boat and trailer and Uncle Gus said they could take the boat and replace the spring… things were looking good.  But, the Speedway Towing truck arrived with a couple of guys…   They assessed the situation and came up with the same conclusion we did… the spring was broke.   They were concerned about pulling the boat up on their truck.  They were afraid they might damage the fiberglass fenders, or the motor.   They said that it would be best if they could tie off the axle and use their hitch which could be lowered below the height of the ball on my truck and then ease the truck over to Captain Dave’s place which was only 3 miles away.    While there was a concern about the weight on the single tire on the right side, they felt there was less risk in pulling the boat that way than loading it on the truck.   So, with some concern, that’s what we did….  We followed the tow truck and boat to Captain Dave’s shop.  The Boss paid the tow truck boys and they were on their way.

Captain Dave and his mechanic took a look at the trailer and came up with much the same assessment that we had… the spring was broke and there didn’t appear to be much other damage.   Captain Dave gave me an estimate to replace the spring and advised that springs on both sides of the axle should be replaced.  He said they would try to get the boat out by Tuesday or Wednesday, and no later than Friday of next week.   So we left it and now we are in wait mode.

The surprise was that there were no mechanic or wheel shops that anyone could recommend for repairing the trailer.

It was also obvious from looking at the broken spring that it had been broke for some time, it had just been held in place by the brackets.  And, because of where the break occurred (right in the center of the spring) that it wasn’t obvious that there was a major issues.  I had just yesterday though replaced the tire on that wheel because it had worn on the outside… so I guess that was a clue.  I was supposed to find someone who could do a wheel alignment on the trailer this week (on the advice of Discount Tire).  The tire I took off was only 2 years old.  If I can get the trailer where it can be pulled back up here, maybe I can find a place I can take it and have all the alignment checked.

Anyway, we are hoping for a quick turnaround at Captain Dave’s with minimal financial damage…..

We just never know what is going to happen when we make a fishing trip…..  It is truly a blessing when we can get to the lake and back without some kind of mishap.

The weekend is looking good.  Maybe we will go fish with the lady off the bank, she had better luck than we did….  If you get the chance… go to the lake….  and best of luck getting there without any major mishaps.

And just a footnote… sadly we did see a For Sale By Owner sign on Sisters Dinner.    We are certainly sad about that, we have enjoyed a lot of great meals there over the years.  We thought they had the best home cooking around.

Life is an adventure… make the best of it and try to enjoy it.