On the lake again…

Just can’t wait to get on the lake again…

The life I love is fishin’ with my girl friend…

And I can’t wait to get on the lake again….

Did you know old Willie was raised just down the road from Lake Whitney….  in Abbott, Texas…  We actually have a friend who played in one of Willie’s first bands… but turned out this old  base tub player loved to dance more than he loved to play in the band… so he and Willie parted ways… but that is another story.

After a week of “maintenance” on the boat trailer we were back on the road and back on the lake again today.    The last time we were out, Friday’s a week ago, we had a somewhat major mishap with the trailer…  We had a spring to break right on the ramp at McCown, and it jammed inside a wheel and carved a bunch of nice aluminum out of it…  But, we were able to get it towed over to Cap’n Dave’s and got’er fixed right up and we had it back by last Saturday night.   But, Dave advised we had best rework the shackles and equalizers before we did an awful lot of running around… And, we had to find a new rim or a replacement rim for the spare..   During the week, we were able to find a new replacement rim at Terry’s Tires for a reasonable price.  And, D & Y Welding  in Cleburne. scheduled us in on Friday to have the shackles, bushings and bolts replaced on the front axle and they replaced the equalizer as well. D & Y is a trailer manufacturer and knew some stuff about trailers….  We were real happy we found them and got the benefit of their help and advice.   So, the trailer, by most estimates, should be in good shape now… good for another 7 years I guess.

There were some really nice days this past week…. we just hated we were not on the lake.

It wasn’t quite clear how the weather was going to be today, other than in the 40’s and low 50’s, so we elected to wait until this morning to decide whether to make the trip to the lake.  We were up early, made our coffee and set down and watched old Bill Wilcox on Honey Hole make a trip to Athens lake.   It looked like for a while they were just going to load the boat… and they did have a good day…   It was enough to get our blood pumped and The Boss jumped up and started getting breakfast ready and making lunch for the lake.

The weather report Friday night had been that it was going to be a chance of rain in Whitney beginning around noon.  But a quick check of the Internet weather this morning told a different story.  Winds were going to be 3 to 6 and no rain.  It would be cloudy and in the high 40’s and low 50’s.   That was good enough for us.    We were on the road by 9 a.m.    Guess you could say we were not pushing it too much.

When we got to the ramp at 10 a.m., it was packed!  There were more than 20 rigs in the parking lot.   Obviously someone had a tournament cooking today.  Of course those boys are real men and they likely started around 7  in the morning.   Anyway, a quick look around the lake revealed that most had either gone up the lake or down the lake.  There were not that many boats in sight.   There were none on our favorite fishing spots which was a good thing for us.  The air temperature was about 50 °and the water temperature was 50°.  The water seemed relatively clear.  Even with it being cloudy, and there was a complete cloud cover, we still had some visibility in the water.   The lake level was 524.46, that is still about 8 feet 6 inches down.

We fished a couple of our spots with out a bite and by 11:15 we thought this trip was going to be a bust.   I decided to troll over to another favorite hole while The Boss got our lunch together and then we could stop and eat.   At 11:30 on the nose, we hit a low bluff wall where we were going to eat.   Just as The Boss tossed my wrap and Gatorade up to me, I got a good bite on my T-rig, but the line went slack and the fish came straight to me….  I couldn’t catch up and didn’t get a good hook set.   The Boss continued getting lunch ready.   Another cast to the same spot produced another bite…. Same story.  I didn’t get a hook set.  Both worms had been pulled off the hook at the head….  strange.   But, I suggested to The Boss that she throw her lunch down and grab a rod…  we hadn’t had a bite all morning much less two in a row.   She grabbed a T-Rig and cast out…. the worm no more than hit the water and she said, “I’m getting a bite”….   Better than me, she set the hook and the fish took off for deep water… it jumped 50 feet from the boat ….  it was a good fish.  We scrambled around … I got the net and she drug it to the boat….  a 3 1/4 pounder…  nice looking fish. 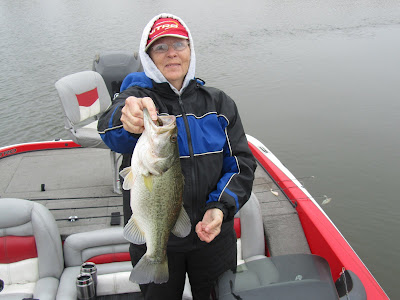 We got a couple more bites there, but no fish.  We eased on just a bit and she put this 2 1/2 pound fish in the boat! 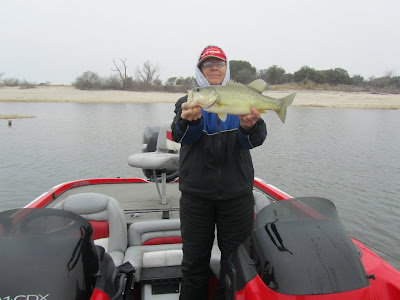 Another one on a T-Rig.  We had the pattern going and she had the touch.  The bites were light now…   You would get just a “tick” and then you would have to let them chew on it for a bit…. at least that was The Boss’ s advice.

I was finally able to get one in the boat myself… it was a 2 pound 6 oz fish. 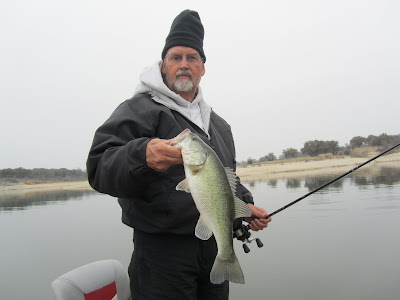 You can tell my head had started to swell….  not from catching fish, getting ready to explode because all I was getting to do was dip up The Boss’s fish.

In case you are wondering what The Boss’s technique is…  here is the photo of her hard at work. 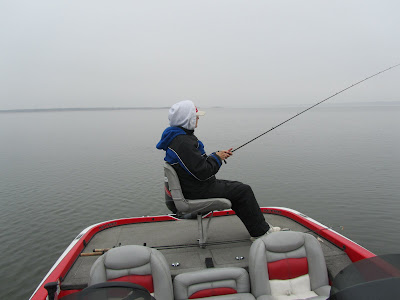 By the way, can you tell it was starting to get a bit more foggy… actually, it was a fine mist and heavy cloud cover.

We gave it another hour, but didn’t turn up any more fish, though we were still getting some bites.. just not getting them in the boat.  We got off the water at 2 p.m.   We had 3 fish that went just about 8 lbs total.  Not a bad day for us.  But, given that we were able to find fish, I am sure the tourney guys were mopping up and loading their live wells.

This was a look at the McCown Valley ramp as we were getting ready to pull out.  You can see that most everyone was still there.  It was about 2:15 and guys were starting to come into the ramp. 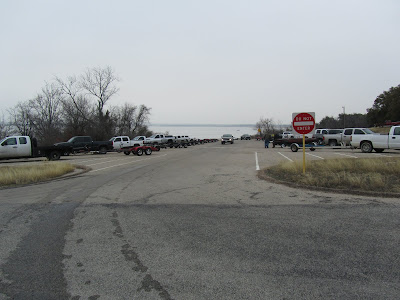 I sorta wish we had stayed for their weigh in.  I would have like to have seen all those bags of fish.   I didn’t even stop to get the name of the club that was fishing.   But, I did a quick count of the rigs in the parking lot and there were 21 there.

So, given everything, it wasn’t a bad day… other than getting beaten again by The Boss.   But hey, what can I say…..  I think the black bass on Whitney are getting ready for the spawn… they are fat and chunky….  full of spit and vinegar….  They will definitely get your blood to pumping when they are on.  I also think when you find one, you are going to find several.  All of our bites came in groups in singular locations.